Thugs
The Spotmen, also known as Madaramen, are the footsoldiers of Dark Science Empire Deathdark and antagonists in Dai Sentai Goggle V.

They are androids clad in camo jumpsuits who serve as fighters for Deathdark. They are typically sent out in squads led by Synthetic Beasts to carry out attacks in the name of Deathdark. There also exists a special shinobi class of Spotmen called "Spotmen Ninjas".

In addition to being skilled in hand-to-hand combat, Spotmen wield a variety of weapons. They use spears and knives for melee combat, and machine guns and bazookas to attack at a range.

When Dr. Hideki Hongo discovered evidence of Deathdark's existence while investigating the abandoned Wolfburg Castle in Germany, a squad of Spotmen were sent to eliminate him. He was saved by Kenichi Akama, who would go on to be Goggle Red of the new team Hongo formed to fight against Deathdark, Goggle V. 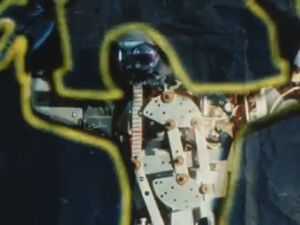