Kill the security guards. (failed in both games)

Springtrap, or Spring Bonnie, is the main antagonist of the 2015 horror game, Five Nights at Freddy's 3, and the 2017 horror game, Freddy Fazbear's Pizzeria Simulator (alongside Scrap Baby). He is the only character in the third game that will kill the player as opposed to just jumpscaring him/her. His original identity was William Afton, the killer responsible for the events of the FNAF series), making him the overarching villain of the entire franchise. He is also the main villain of the Book adaptions as well.

In the Pizzeria Simulator, he is voiced by PJ Heywood.

Springtrap is an old model of a Bonnie suit, withered and falling apart. The fur has gone from a golden yellow to a sickly olive. There are many holes and tears in the suit, exposing parts of the rusted metal endoskeleton as well as wires. His mouth is fixed in a grin, with the teeth being chipped and yellowing. His eyes are a pale grey and usually fixed in a forward position. His ears are falling off and the left one is missing the top half altogether.

Rare boot-up screens for the game show what seems to be human remains inside of Springtrap's suit. They consist of dark pink chunks. Human innards can also be seen through the hole in the torso.

In Five Nights at Freddy's 4 during the minigames, Springtrap (then known as Spring Bonnie), appears onstage, intact, next to Fredbear.

In Pizzeria Simulator, Springtrap has been damaged even further from the fire, however this has made him no less dangerous or resourceful. Much more of Springtrap's endoskeleton is now exposed with the remaining portions of his animatronic suit appearing similar to parts of Golden Freddy's withered design from FNAF 2 (for example his upper head seems to be shaped like that of Golden Freddy). His ears appear to have deteriorated so much that only a stub with a couple of wires remain and also a part of his left arm is missing.

Springtrap moves around the attraction in a way that seems to be taunting the player, as he will stare directly at the camera, hide in plain sight, and stare at the player through the office windows and doors. He also can be drawn by sound, so the player must use audio clips in various rooms to lure him there. However, the alarm in the office can also attract Springtrap. When he attacks the player, he steps into the office via either the door or the right vent, slinking up to the player in a human-like fashion.

Springtrap was found to be an addition to Fazbear's Fright: The Horror Attraction. Springtrap became active at night, possessed by the spirit of William Afton. He attempts to get into the office and kill the night shift security guard.

The Springtrap/Spring Bonnie suit makes a brief cameo appearance, with Afton putting the suit on another employee.

In Sister Location, he appears in an ending cutscene after the Custom Nights, revealing himself to still be alive after Fazbear's Fright burned down, with Michael Afton's voiceover playing in the background, saying that "they" (the Circus Baby Gang) confused him for William, and he finally found "her" and put her back together (presumably his sister/Baby/both) and that he should be dead but isn't, and that he blames his father (William) and is now coming to find him. The cutscene ends with Springtrap popping up among the ruined Fazbear's Fright.

Springtrap returns in Freddy Fazbear's Pizzeria Simulator and has deteriorated to the point where much more of his endoskeleton has been exposed. Springtrap is one of the animatronics who received a call to gather at the player's new pizzeria. Unlike the other animatronics however, Springtrap suspected the call to be false, but decided to go anyway just out of curiosity. He becomes one of the hazards in the game, either attacking the player from one of the office vents or attacking while doing audio response tests on him. On the final day, it's revealed that the Cassette Man was responsible for sending out the call to the animatronics and had lured them all into a trap. Springtrap then presumably meets his final end when he is incinerated with the other animatronics, during which the Cassette Man tells him "the darkest pit of hell has opened to swallow you whole, so don't keep the devil waiting old friend."

The lower jaw of a decaying corpse is visible inside Springtrap

Purple Guy is crushed by the Spring Bonnie suit.

Springtrap at the end of Sister Location. 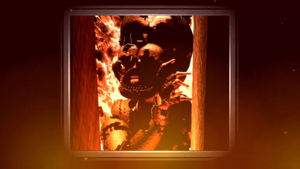 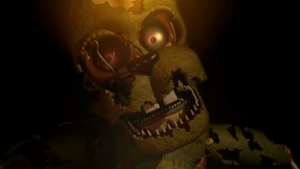 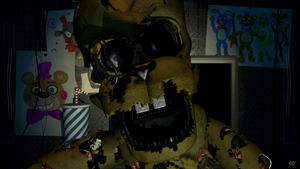 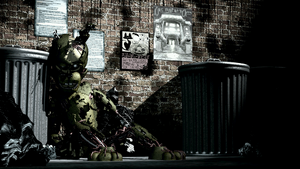 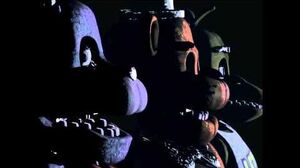 Retrieved from "https://villains.fandom.com/wiki/Springtrap_(Five_Nights_at_Freddy%27s)?oldid=2408659"
Community content is available under CC-BY-SA unless otherwise noted.