Springtron (also referred to as Spring Tron or Tron by fans) is the secondary antagonist in the 2017 Nintendo Switch fighting game ARMS.

As his name suggests, Springtron is a robotic clone of the game's main mascot Spring Man. Sharing the same height, ARMS girth and voice (although through a heavy robotic filter) as well as spring-shaped ARMS. Aside from the fact that he is a robot, he also differs from Spring Man in that he wears a mask to cover the area of his face where his mouth would be, as well as sporting a black-red color scheme to make him look more intimidating.

In version 3.2.0 of the game, Springtron was added to the game and shown off in a trailer. Players who played the Grand Prix mode on level 4 or higher and never lost a single round would suddenly face Springtron as a secret boss. Springtron, like Hedlok, was quite challenging: sporting the same low-weakness style like Spring Man. However, the major difference is that he was able to activate a huge EMP shockwave in half a second, which would put him in a state similar to Spring Man's comeback mode when he is at 25% health or lower: increasing his movement speed and permacharging his ARMS. Additionally, the EMP would also instantly disable any ARMS that were in its range. Players would receive a badge for defeating him.

In version 4.2.0, he was added as a playable character with the Sparring Ring stage added in the 3.2.0 update being appointed to him. In his Grand Prix, it is described he is a merciless "ultimate fighting machine" with his only goal being to win: this is supported by the fact he has zero "mercy" on his official stats, his hobby is getting flawless victories and he analyzes the main weakness for every fighter he faces: Master Mummy is described as being weak to the sound of nails on chalkboard, Byte and Barq are weak to kids being too rough with either of them and so on. However, at the end of his Grand Prix at level 4 or higher, he is shown to show signs of sentience and compassion to a child. When Dr. Coyle was released in version 5.0.0, it is revealed that the fighter Mechanica was actually the kickstarter to an idea for a robotic clone of Spring Man, and the blueprints were stolen by Coyle. However, in the patch notes as well as some official art released on Twitter, it is revealed Mechanica is working on him to make him a more balanced fighter.

As to be expected, he is much weaker as a playable character, needing a full second to use his EMP rather than a half one. Without the boost from the EMP, he is also quite sluggish, whereas the Grand Prix version is roughly the same speed as Spring Man. Like all the other fighters, he has been in two Party Crashes: one versus Kid Cobra, one versus Mechanica. He also has some other badges related to his backstory: one received with ten rounds of Spring Man versus him (the obvious rivalry between them) one received with ten rounds of him versus Helix, referencing they are both creations of Dr. Coyle. The badge for defeating him in Grand Prix also gained a shiny version if players defeated GP Springtron as playable Springtron.

Aside from the fact he wants to defeat every fighter as badly as possible, he doesn't have much personality to speak of, which is logical, considering he is a robot. The closest thing he has is Dr. Coyle thinking he is better than "The original", AKA Spring Man, which she admits in her unique defeat quote for Springtron.

Like Spring Man, Springtron is able to deflect incoming attacks with a small shockwave by charging after a dash or jump, then releasing the button before he is fully charged.

After a full charge, he rises from the ground and emits a huge shockwave that disables any extending arms within its range. During his descent, he also has a smaller "bubble" around him with the same effect.  After this, his arms will stay constantly charged and his dash distance and speed will be boosted greatly. This effect lasts for about 9 seconds, or until he is knocked down.

In exchange for these benefits, Springtron doesn't have Spring Man's permanent charge at 25% health, and Springtron is slower than Spring Man. 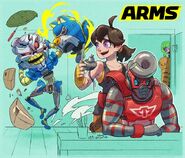 Mechanica fixing up Springtron for version 5.2.0

The badge you get for beating Springtron during the Grand Prix.

The badge you get for reaching Level 10 in the 13th Party Crash. 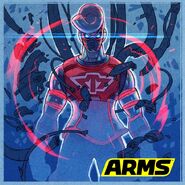 The picture at the end of the Grand Prix if you beat it with Springtron.