Assassinating targets for his clients.
Making money after completing his contracts.

Be the world's greatest spy (failed).

Kill Iron Man and anyone that gets in his way (failed).

Spymaster is a Marvel Comics supervillain and an enemy of Iron Man. The Spymaster persona is used by three supervillains, the first and original one still unknown, Nathan Lemon, and Sinclair Abbot.

The first and original Spymaster was a costumed freelance industrial spy, saboteur, and assassin. He had access with the latest types of advanced weaponry and was a professional of espionage. Even after his death, he never revealed his true identity. The only information that was revealed about him was that he was once a boxer.

Spymaster's known criminal career started when he and his assistants, the Espionage Elite, are hired by the criminal organization, known as Zodiac, to infiltrate Stark Industries and steal Tony Stark's secrets. However, they were interfered by Iron Man (Tony Stark's alter-ego). Later, he was assigned by the same organization to capture Daredevil but failed that operation too.

Spymaster would go on to assist three supervillains, whom were also Zodiac operatives. These were Aquarius, Capricorn, and Sagittarius. They were to steal the Zodiac Key from Tony Stark. This ended up later with Spymaster being transported to another dimensional realm of the Brotherhood of the Ankh, but he managed to return to Earth and escaped. Spymaster was later hired by rogue S.H.I.E.L.D agents to assassinate Tony Stark, but that ended up in failure. He would then be employed by the supervillainess, Madame Masque, to steal a prototype energizer link, and in the process kidnapped Bethany Cabe (who was a former girlfriend of Tony Stark).

Spymaster would clash with Iron Man for many times after that point, and one time dealt with Daredevil. He would eventually be led to believe that he successfully assassinated Tony Stark, but it was actually just a Life Model Decoy. Spymaster would also steal several Iron Man designs and gave them to Justin Hammer and subsequently cause the Armor Wars event. Stark comes to believe that Spymaster might have figured about his secret identity and that Spymaster kept that secret to himself.

He would later reappear after coming into conflict with Ghost. Spymaster tried to assassinate Ghost under orders from the Roxxon Energy Corporation. Their battle was interrupted, however, by Iron Man and both villains tried to escape. The Ghost offered Spymaster one of his intangibility devices and he used the device to go through a wall. Unbeknownst to Spymaster until it was too late, Ghost removed the device from Spymaster's chest while he was still phasing halfway through the wall, and caused him to rematerialize partially inside the wall. This killed him instantly.

During the events of the Infinity storyline, Spymaster owns a nightclub for supervillains known as the Black Market Club. Spymaster later hires supervillains Blizzard II, Constrictor, Unicorn (Marvel) I, Whiplash IV, and Whirlwind to assist him to attack Stark Tower (which is defenseless at the time due to the Avengers leaving Earth to fight the Builders). When they arrive in Stark Tower, he uses teleporter discs to transport some Iron Man Armors to his buyers. Spymaster then betrays the group and escapes, leaving the rest of them to be discovered by the heroes that were using the tower as a base. The team is able to defeat the heroes and are offered to be taken to Spymaster by Titanium Man. They arrived to a spaceship and are ambushed by both of them, whom Titanium Man reveals he is actually Captain Atlas of Kree as well as the buyer.

The supervillains are able to escape them and later fight both Spymaster and Titanium Man along with an army of Iron Men. Iron Man eventually arrives, by tracking down the armors, and helps the villains fight Spymaster and Captain Atlas. During the fight, Blizzard uses his recently acquired electrokinetic powers, after being exposed to the Terrigen Mists, to overcharge the Hulkbuster armor Spymaster was using and make it fly away and explode. Spymaster died and finally met his end.

The second Spymaster was an accomplished student of one of Taskmaster's criminal training academies. There, through tough and dangerous training, he won the right to the name in a series of tests including a final test of killing all other contenders in a battleground simulator blindfolded. This new Spymaster was hired personally by the Taskmaster for Justin Hammer, and battled Iron Man in his first appearance. This iteration had one of his own Espionage Elite bug Tony Stark's office, and overheard Stark and his secretary Pepper Potts talking about Stark's secret identity. Acting under orders from the Mandarin, his Elite ambushed and beat Stark severely, until the Black Widow intervened. In 2007, Spymaster II, who has had no known identity, was later named Nathan Lemon due to a series' 'flashback' episode in which Stark delves into his mind and figures out Spymasters name.

The third Spymaster, Sinclair Abbot, a wealthy industrialist, is the most recent individual to become Spymaster. He achieved this by having the previous one, Nathan Lemon, arrested, severely beaten in jail, and then killed in intensive care by his wife. His debut was in the miniseries Iron Man: The Inevitable. He has yet to attempt any direct action against Iron Man, choosing to send Ghost against him, and playing mind-games with Stark at public events, subtly jabbing him about his alcoholism and former military contracts. Abbot feels that to be a true supervillain, as he needs to prove his mettle against Iron Man, while simultaneously, to humble Iron Man. There has been an extended period of time since Iron Man has fought a "supervillain" in the traditional terms, and Abbot resents the apparent indication that Iron Man is "too good" for supervillains, as if he is above that station.

With the Civil War causing Tony Stark considerable problems, the Spymaster was hired by Karim Wahwash Najeeb (chairman of the World Islamic Peace Coalition and one of the men responsible for the death of Stark's mentor Ho Yinsen) to kill Iron Man. Spymaster killed Tony Stark's chauffeur and attempted to use Happy Hogan as live bait to draw Iron Man, but Hogan managed to attack him and both fell several stories to the ground, which led to the death of Hogan, one of Tony's oldest and dearest friends.

Spymaster later resurfaced where he has a bomb planted in him by Mandarin and Ezekiel Stane as they force him to assist other villains in attacking Iron Man. After being defeated and rendered powerless during an attempted assault on Stark Resilient (deprived of his suit and weaponry while awaiting transfer to a Supermax prison), he apparently commits "Suicide by cop" and is shot multiple times by the policemen guarding him. It is unknown who will become the next Spymaster.

Each Spymaster has no superhuman abilities. However, all three are exceptional fighters and strategists. The first Spymaster was an excellent hand-to-hand combatant, with formal training in boxing and various martial arts. The second Spymaster is also an excellent hand-to-hand combatant, having been trained at the Taskmaster's Academy. Each is also an extraordinary industrial spy and saboteur, master of disguise, a superb actor, a highly agile and skilled athlete, and greatly skilled in the uses of virtually any kind of gun. Spymaster always has access to cutting-edge technology for a number of espionage-related devices and weapons, both of his own design and those of Justin Hammer's.

The original Spymaster used various special devices including, devices in his gloves and mask that projected concussive energy blasts, small and powerful hovering electromagnets, incendiary missiles, "razor-discs" that could pierce Iron Man's armor, devices that enabled him to absorb Iron Man's repulsor energy, stunguns, sleep inducing "somnu-gas", boot jets that allowed flight, and a device in his belt buckle that summoned an advanced model hovercraft that could operate automatically according to pre-programmed instructions.

Both the first and second Spymasters have employed electronically amplified nun-chakas that can damage Iron Man's armor. The Spymaster wears a battlesuit of bulletproof Kevlar body armor which provides some protection from physical attacks, and which contains various pockets for holding weaponry. 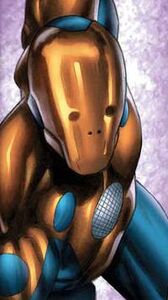 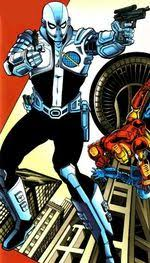 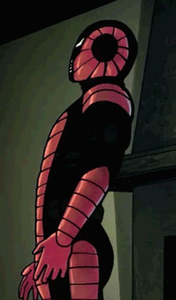 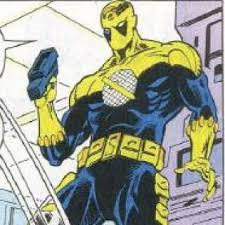 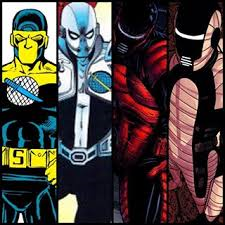 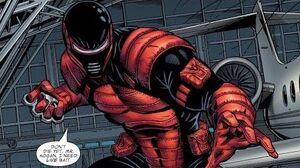