No information
Squeaky is a vicious mouse and is the overarching antagonist in the animated TV series WordGirl. He is best known as being the mouse who was responsible for Dr. Two-Brains's creation.

Before he was fused together with Squeaky, Dr. Two-Brains was an ordinary, though easily distracted, a scientist named Steven Boxleitner. He was an ally to WordGirl. Boxleitner was working on an experiment that would help people to read into the minds of rodents. His test subject was Squeaky, an albino lab mouse. While he was hooked up to the machine, Boxleitner was worried about his pastrami sandwich, and left Squeaky, alone, for a second. While he was away, the fiendish mouse saw a button that was entitled "Holy Cow! Don't Press This Button!," and he pressed it. This action fused his brain and Boxleitner's brain. The end result was a hybrid scientist named Dr. Two-Brains. In the episode "Mouse Brain Take-Over," he allowed Squeaky to take control of his mind so that he could cause more chaos. Dr. Two-Brains then reenters his mind and demands him to leave. The reason was that his henchman didn't like the change. 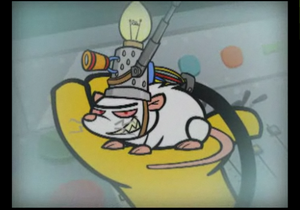 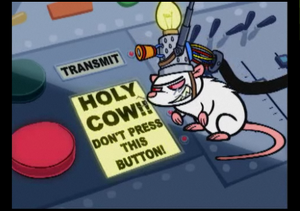