Hanging out with SpongeBob (formerly).

Squidward Tentacles is the secondary antagonist of the SpongeBob SquarePants Anime OP YouTube animation by Narmak and its sequel. Based off the character from the popular Nickelodeon cartoon, this Squidward was originally an employee of the Krusty Krab and friend of SpongeBob until he defected over to the Chum Bucket and began opposing the Krusty Krab.

Squidward is shown to have at first been an employee of the Krusty Krab and a good friend (and possibly lover) of SpongeBob. However, for an unknown reason, Squidward quit his job at the Krusty Krab and signed a contract to join the Chum Bucket, leaving Mr. Krabs a mocking note in the process. He was later injected by Plankton with the Chum Bucket serum, granting him super strength and other new abilities.

Squidward then heads to the Krusty Krab to settle his score with the Krusty Krew. He fights Sandy and Patrick Star, cutting off the arm of the former and decapitating and killing the latter. SpongeBob then arrives just in time to see his best friend being killed, causing him to fly into a rage at Squidward.

Squidward reappears in the animation's sequel, where he is depicted as a commander in Plankton's forces. He challenges SpongeBob to a rematch. SpongeBob agrees and injects himself with the Krusty Krab secret formula to gain more power.

The two then have an intense fight at Jellyfish fields. Squidward manages to gain the upper hand and overpower SpongeBob but before he can defeat him, the spirit of Patrick Star appears to give SpongeBob the strength he needs to take on Squidward. Unfazed, Squidward sprouts two more tentacles from his back before he and SpongeBob charge at each other to duel again.

Squidward reappears in the third opening, where it is hinted that his turn from the Krusty Krew might have been motivated in part due to jealousy over SpongeBob receiving "Employee of the Month" so many times in a row over him and because SpongeBob became a couple with Sandy. Towards the end of the animation, he is seen fighting a mysterious hooded figure (hinted to be Patrick revived through unknown means), who chops both his arms off. 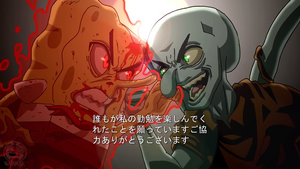 Squidward facing off against SpongeBob. 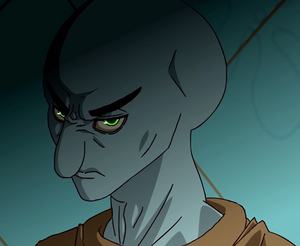 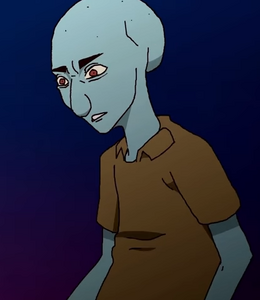 Squidward before being injected with chum. 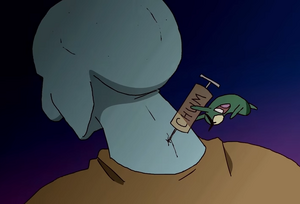 Squidward being injected by Plankton with the chum serum. 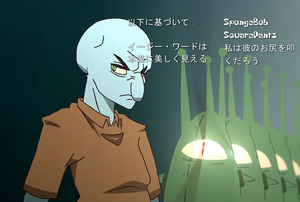 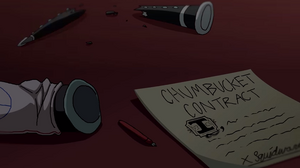 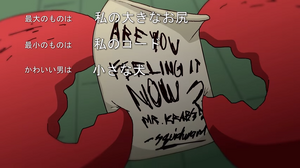 Squidward's note to Krabs after quitting. 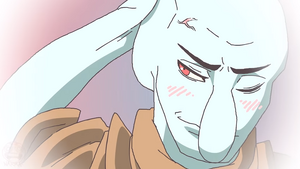 Squidward blushing in one of SpongeBob's flashbacks. 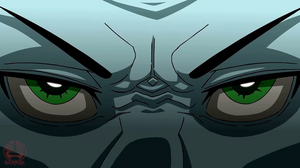 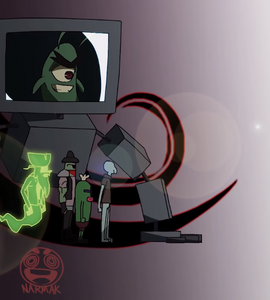 Squidward on the side of the villains in OP 3.
Add a photo to this gallery
Retrieved from "https://villains.fandom.com/wiki/Squidward_(Narmak)?oldid=3460531"
Community content is available under CC-BY-SA unless otherwise noted.