Get revenge on Manny and his friends for ruining his pirate life (both failed).

Squint is one of the secondary antagonists of the 2012 film Ice Age: Continental Drift, and the main antagonist of Ice Age: The Great Egg-Scapade. He is a prehistoric Palaeolagus-like rabbit and a member of Captain Gutt's crew.

He was voiced by Aziz Ansari in Continental Drift, and by Seth Green in Ice Age: The Great Egg-Scapade.

He serves as the pirates "bad boy of the crew" and he seems to enjoys his lifestyle. He was lost at sea on a drift of ice cap and found by Gutt and his crew, vowing his life to him and being the very insane one of the group. He and the rest of the crew look down on Manny, Sid, Diego, and Granny, he tells his allies to attack and Shira stops his command. Like the rest of the crew, they were enjoying tormenting their prisoners and having fun at the same time.

After Shira betrays the crew, Squint becomes the first mate and takes full control of it. In the climax, he was distracted by Shira when she teased him on how cute he is for wiggling his nose and gets stomped on by Ellie. Squint survived the final battle in Continental Drift, as he is seen as a main antagonist in a short episode "Ice Age: The Great Egg-Scapade".

As the "bad boy" of the pirates, he is deranged, rude, deceitful, and overconfident, as he seems to enjoy laughing at others and heads for battle. His passions are his bone knives and acts of violence. Known to have more energy than the whole crew and it can last for days. He just wants to be a better first mate than Shira.

But, seen in picture and scene of the film. He gets agitated for hearing jokes like calling him "Easter Bunny" by Manny did, going in an aggressive state. Also, calling him cute or cuddly just makes him very angry.

He may be small and not so strong. He is the fastest and most violent of the crew, always rushing first in battle and can tie up anyone in five seconds, steal someone's booty (food) in three seconds and reappearing after being tossed by Captain Gutt. 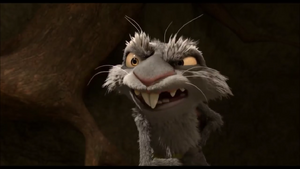 Squint as he appears in The Great Egg-Scapade. 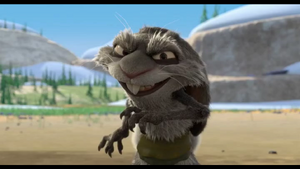 Squint in the credits 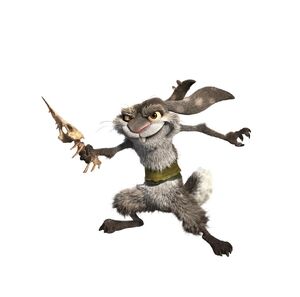