Invade the city and destroy the Ninja Turtles.

They are apparent parodies of the Xenomorphs from the Alien franchise, with their debut episode's plot containing direct similarities to the first Alien film. They are red squirrels that have been infected with mutagen, causing them to turn into feral monsters with near human level intelligence. Their encounter gave Raphael nightmares for a while.

Squirrelanoids are a group of 9 foot humanoid mutated eastern gray squirrels that have red near-skeletal-like appearances, glowing green eyes and retractable tongues with second mouths in their main mouth (similar to the Xenomorph from the Alien franchise). In their original form, they look like ordinary North American gray squirrels, but when they are excited or angry, they show an unnaturally aggressive behavior and a long, movable gripper tongue, which they can use as an additional limb.

Rather than multiply like normal grey squirrels through ordinary mating, Squirrelanoids use a quasi-parasitic form of reproduction. To this end they are able to reproduce by entering into a potential host's mouth penetrating into the gastrointestinal tract, where they divide up as a single-celled organism and split usually into two perfectly similar new Squirrelanoids per reproduction. Both offspring grow up within a few hours to be fully grown animals, whereafter the host coughs them up.

As a Squirrelanoid spread to breeding in the mutant Raphael, a strange further transformation was observed, which radically impacted the appearance in the subsequent generation of Squirrelanoids. The Squirrelanoids produced in this litter were huge, monstrous versions of their kind. The reasons for this reaction are unknown, however, it can be assumed that Raphael's already mutated DNA must have had a decisive influence on the development of the embryos. One of the most striking changes is the transformation of the whips tongue of the first version to a kind of second head, which has its own biting tools and it's own throat. 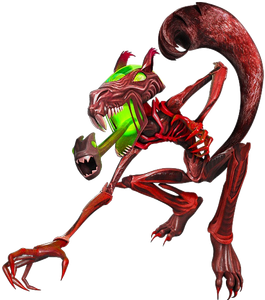 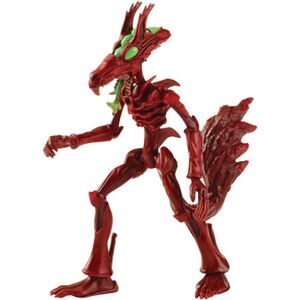 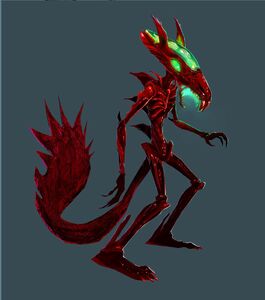