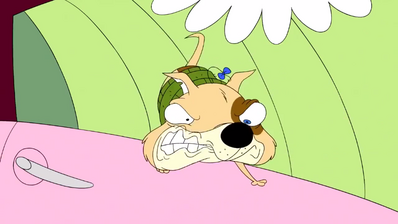 Squirty is a supporting antagonist of "Tom and Jerry: The Fast and the Furry".

He was voiced by Billy West.

Squirty is Grammy's pet dog and a vicious prankster. He bites the finger of Biff Buzzard during their interview for The Fabulous Super Race, and was revealed that he was the one who started the traps and tricks to antagonize others at The Fabulous Super Race, including Tom and Jerry themselves. Supported by Grammy, he ends up throwing a sink towards Tom, has him run over, bites his tail, leading Tom getting revenge on him and his master later on. In fairness however, Squirty and Grammy ended up out of the race falling down from the accidental balloon incident that wasn't Tom's fault. He even attempts to abandon his owner Grammy to only have himself rescued and cared for.

Retrieved from "https://villains.fandom.com/wiki/Squirty?oldid=4109196"
Community content is available under CC-BY-SA unless otherwise noted.