Villains Wiki
Register
Don't have an account?
Sign In
Advertisement
in: Thugs, Siblings, Partners in Crime,
and 39 more

Retrieve the royal crown and then kill Flynn Rider (failed).

The Stabbington Brothers are a pair of identical twin brothers that are thieves and the secondary antagonists of Disney's fiftieth full-length animated feature film Tangled and recurring antagonists in the follow-up Tangled: The Series.

They were both voiced by Ron Perlman, who also played Dieter Reinhardt in Blade II, Nino in the 2011 film Drive, Warhok in Kim Possible, Slade in Teen Titans, Xibalba in The Book of Life, Mr. Grasping in An American Tail: The Treasure of Manhattan Island, The Lich in Adventure Time, and Clayface (Matt Hagen) in the DC Animated Universe.

The Stabbington Brothers are first seen with Flynn, heading for the castle to steal a royal crown that belongs to the missing princess. The brothers hoist Flynn down with a rope to retrieve it, but he gives them away. The three obtain it successfully, but the guards quickly rush for them and a chase begins. When the trio reaches a dead-end, the brothers will only let Flynn go first if they have that satchel that holds the crown. Although they had the satchel, Flynn betrays them and was able to grab the satchel from under their noses, much to their anger. Stranded, the brothers are arrested but roam along with the guards as prisoners in chains.

Later, at the Snuggly Duckling where Flynn and his new allies Rapunzel and Pascal are located, the two escape from the guards and then try to catch Flynn as he escapes. However, they are overwhelmed by the collapsing river water built up by the dam, which is destroyed in the process where Maximus attempts to apprehend Flynn.

They survive the chaos, exiting the Pub's secret passage. The two stumble upon Rapunzel's vain mother figure, Mother Gothel. She strikes a deal with the two and reveals the secret of Rapunzel's hair, which they find more valuable than the crown. After Rapunzel and Flynn enjoy a romantic evening watching the lanterns, Flynn spots the brothers and brings the satchel to them in the hopes that they will leave Rapunzel and him in peace. The brothers, however, point out to Flynn that they are aware of Rapunzel's hair, and want her instead of the crown. The brothers render Flynn unconscious and tie him up to their boat, pushing it back into the sea to sail back towards the kingdom. Cleverly, through Mother Gothel's commands, the brothers made it seem as if Flynn was escaping with the crown, having Rapunzel believe he was abandoning her, trading her and her magic hair for the crown.

The brothers confront Rapunzel and tells her just that, breaking the girl's heart. They then prepare to kidnap her, planning to use her magic hair to make a fortune. However, Mother Gothel betrays them and knocks the duo out with a branch, making it seem as if she was rescuing Rapunzel as her entire plan was to keep Rapunzel with her, hidden away in their tower in the forest. Offscreen, the brothers are arrested and taken to the prison along with Flynn. They are last seen in their prison cell as Flynn is being escorted to his execution. In fury, Flynn grabs them and demands to know what happened to Rapunzel and how they knew about her hair. They fearfully tell Flynn that Gothel was behind it all. They aren't seen for the remainder of the film.

They are briefly shown again in the short Tangled Ever After, where they appear to have redeemed as they attended Flynn and Rapunzel's wedding.

They return in Tangled: The Series, where they seek revenge against Flynn Rider for previously abandoning them to the authorities.

The Stabbington Brothers are rude, vengeful, arrogant, and greedy. They love jewels and other riches. They despise betrayal and will get rid of anyone who would dare to double cross them. 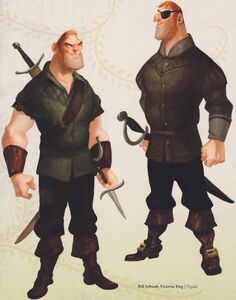 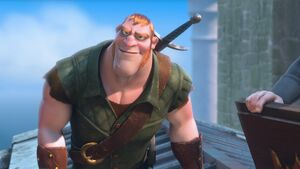 "We do this job, you can buy your own castle." 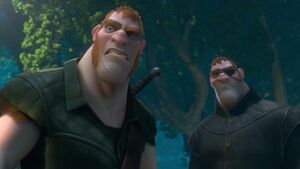 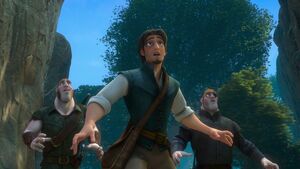 The Stabbingtons and Flynn Rider coming across a wall. 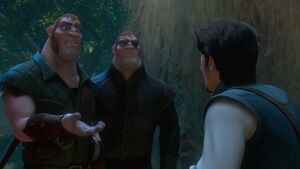 The Stabbingtons demanding to be given the crown before they help Flynn. 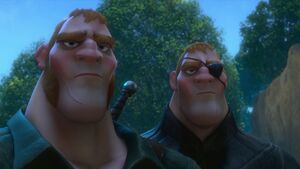 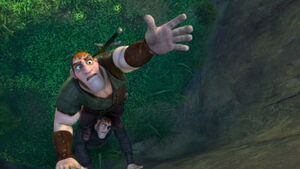 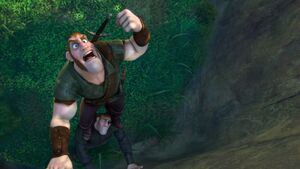 The Stabbingtons being double-crossed by Flynn. 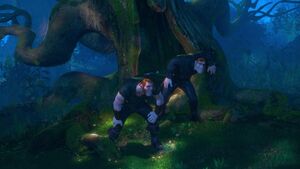 After surviving the flood, the Stabbingtons vow to kill Flynn Rider and retrieve the crown. 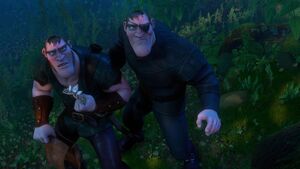 Upon receiving the crown, the brothers are offered something more valuable by Mother Gothel. 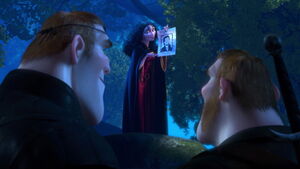 The Stabbington Brothers making a deal with Mother Gothel. 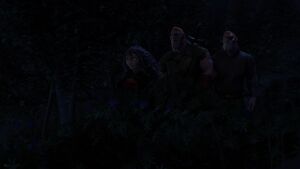 Gothel and the Stabbingtons spying on Rapunzel and Flynn.