Get back at his father Barashitara.
Make up for his past deeds by helping the Zenkaigers defeat the Tozitendo Dynasty. (succeeded)

Stacey (ステイシー Suteishī) is a mysterious member of the Kikaitopia Dynasty Tojitendo and a major antagonist in Kikai Sentai Zenkaiger. He is the son of Mobile Commander Barashitara and is also known as the Tojitendo's "demon prince".

Using the Geartozinger, Stacey is able transform into Stacaesar (ステイシーザー Suteishīzā) and summon corrupted versions of past Sentai teams and mecha. He also possesses his own personal mecha Battle Caeser Robo.

He is portrayed by Ryo Sekoguchi.

Stacey was born as the child of Barashitara and the 893rd wife in his harem. According to Stacey, Barashitara was responsible for killing his mother.

Stacey first appeared to observe the Zenkaigers picking up the trash left behind by Garbage World. After the Zenkaigers were made lazy by the trash's influence, Stacey commented that they were pathetic before departing. He later returned to Kikaitopia and went to approach his father Barashitara, asking if he recognized the sound of his own son.

Stacey was later selected by Ijirude to wield the Geartozinger he had invented. In his first outing with the device, Stacey approached the Zenkaigers as they were fighting a group of Kudakks and used the device to summon the Gorengers to attack them, following by the Boukengers and Magirangers. After Stacey's evil Sentai warriors overpowered the Zenkaigers, Zenkaizer summoned the Kakurangers and used their powers to have him and his team escape. Stacey would eventually confront them again, but this time the Zenkaigers were able to defeat Stacey's evil copies with the power of the Gorenger gear. Undeterred, Stacey transformed into Stacaeser and summoned the mecha of the Zyurangers, Gaorangers, Magirangers and Boukengers to fight them. ZenkaiJuran, ZenkaiGaon, ZenkaiMagine and ZenkaiVroon all grew giant to face them and were able to destroy the four evil mechas with a combined attack, but Stacey simply summoned more mechas to face them.

Stacey continued to summon more mechas, overwhelming the Zenkaigers, until they all suddenly disappeared due to Stacey overexerting the power of the Geartozinger. Barashitara then arrived to assist Stacey, revealing to the Zenkaigers that Stacey was his son. Barashitara attempted to recall which wife he had fathered Stacey with, but was unable to, leading Stacey to correct him and say he came from his 893rd wife. Barashitara then summoned Door World and had him use his power to teleport the Zenkaigers all to different places. Stacey was later able to track down Kaito to face him again. After Kaito said that he was relieved to see even Barashitara cared about someone, Stacey proclaimed that Barashitara didn't care about him at all and was responsible for his mother's death. He went on to say that Kaito's parents were likely either dead or had abandoned him, but Kaito refused to believe it. Stacey then transformed into Stacaeser to face Kaito as Zenkaiser and summoned both the Maskmen and the Fivemen to overwhelm him. However, the other four Zenkaigers then arrived and crushed the evil copies underfoot in their giant forms, which they had used to travel across the world without using doors. Door World then arrived, but Stacey killed it and took its Tojiru Gear before summoning a Kudaitest and throwing the gear at it to turn it into the Great Door World. After the Zenkaigers destroyed the Great Door World, Stacey prepared to face Zenkaizer again, only for Zox Goldtsuiker to suddenly arrive, transform into Twokaizer, and drive him off.

Returning to Tojitendo Palace, Stacey asked Ijirude who Twokaizer and demanded to know why he hadn't warned him, but Ijirude stated he had no idea Twokaizer would show up. Gege then commented that it was curious that the World Pirates they had encountered before would choose to show up now, before Boccowaus demanded another explanation from Ijirude and pounded his fist so hard it caused Ijirude to fall over. Ijirude told Boccowaus he would develop a countermeasure at once before getting up and telling Stacey to come with him. 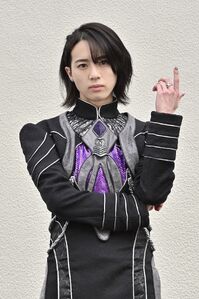