Leader of the Orphanage

Giving harsh orders to the children.
Obtening more and more children, using manipulation, in order to gain subsidies.
Abusing (e.g. whipping, punishing and brutalizing) children.
Murdering those who attempt to escape the orphanage.

The Staff Leader is a nameless antagonist in the Higurashi: When They Cry series. He is a rather minor character, but he did play a significant role in Miyo Takano's upbringing.

At first glance, the Staff Leader appears to be a respectable, honest, trustworthy and overall kind man. However, this was nothing than a mere facade in order to keep his post at the orphanage. Actually, the Staff Leader is a sadistic, psychopathic, remorseless, awful and tyrannical gaoler who lead the place with an iron fist. Greedy, he attempts to attract a maximum of children in order to gain subsidies and to keep the reputation of his orphanage.

He does not stand failures of any sort, especially coming of children. Extremely wrathful, he often lashes out at children for no reasons. In fact, he is only doing that. He is fond of public punishments, and allows his employees to brutalize the children. The Staff Leader is also a vicious sadist who forced a terrified Miyo to eat his dejecta. Worse, the Staff Leader is also prompt to kill as he murdered, through a horrible torture, Miyo's only friend.

It is unknown why the Staff Leader has such an immense hatred of children. He might have been abused or bullied in his youth, but given what he did to Miyo, it is more likely that he is abusive by very nature, and used his position to freely commit his deeds without being caught. In the visual novel, it's shown that he was a japanese WW2 soldier, bitter and mentally affected due to the horrors he had to go through.

Miyo is sent to the Orphanage after the deaths of her parents. The Orphanage is led by the seemingly benevolent Staff Leader who goes out of his way to warmly invite the young Takano to the facility.

However, this is simply a front; he is revealed to be a sadistic disciplinarian who runs the Orphanage with an iron fist.

He allows his employees to abuse the children, and he dishes out disturbing punishments to those he deemed to be disobedient. One such punishment has him force a young boy into eating his ink after he had accidentally spilled some. He also brutally whipped children in front of their peers, among other atrocities. During her time in the orphanage, Takano meets a young girl named Eriko. On one such day, Eriko arranges an escape plan consisting of herself, Takano, and two children. The plan was to escape to the House of Love, reputed as being one of the best orphanages around.

They attempt to escape the facility, only to be pursued in the forests. Miyo is grabbed by the Staff Leader, and she is nearly killed by him. Miyo and the three children are given nightmarish punishments with Eriko herself being sent to the chicken coop wherein she is pecked to death by the ravenous birds. Miyo is made to witness the death of her only friend, and she is forced to clean the filthy outhouse with her tongue. Eventually, Dr. Takano arrives to the Orphanage, and he adopts the young girl.

It is unknown as to what happened to him after Miyo left the Orphanage. Despite this, the Staff Leader left a lasting impression on Miyo's life, ultimately causing her to become the Godhood-obsessed psychopath she is now. 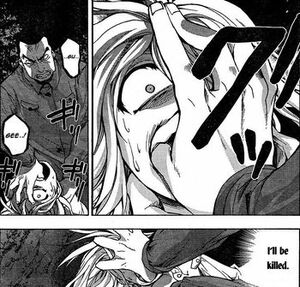