Guardian of the National Forest

Defending the National Forest from intruders.

Kill anyone who trespasses into the forest.

The Stag-Man is a minor antagonist in Regular Show. He was a deer/man humanoid that appeared in the episode "Camping Can Be Cool" as the main antagonist.

He was voiced by Robert Englund, who also voiced Anti-Pops in the same show and portrayed Freddy Krueger in the A Nightmare on Elm Street films.

The Stag-Man hates Mordecai, Rigby, Eileen and Margaret because they violated the law to not trespass into the forest. Margaret was the first one to see him when she was out to collect wood. He chased the four who tried to flee in Margaret's car, but was proven to be even faster than the car. He aimed an arrow at the wheel of the car and the four came out of the car and saw a park ranger coming and begged for help. Before he could kill them with arrows, he is killed after he is run over by the Park Ranger, causing a "deer in the headlights" scenario (despite being part-deer and part-man).

After he was dead, the park ranger called the taxidermist and said that they should "put some clothes on the humany parts". He also represents a Native American, which is comparable to real life since real Natives live in preserves and parks as well and they both believe that all parts of the hunted should be used so that nothing is wasted.

Stag-Man was resurrected by Garrett Bobby Ferguson Jr. in "Exit 9B" but was sent back to Hell after Thomas signed the document that made the park a historical landmark. 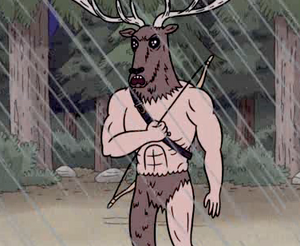