Head of Security of the Carver Media Group Network

Aid Carver in his plot (failed).

Richard Stamper, or better known by his surname Stamper, is the secondary antagonist of the 1997 James Bond film Tomorrow Never Dies. He is Elliot Carver's right-hand man of the Carver Media Group Network.

He was portrayed by Götz Otto, who also played Klaus Adler in Iron Sky.

Sending the British HMS Devonshire into Chinese waters by the use of a stolen GPS encoder (thanks to Henry Gupta), a stealth ship (created by General Chang and commandeered by Captain Scott and his crew) creates tension when Stamper gets Timblin to use the Sea-Vac drill to attack the ship, just as Scott fires a missile at one of the Chinest MIGs to frame them for the attack. With the ship going down, Stamper murders 17 of the British sailors who survived the sinking before having Scott to send his divers down to steal a missile from the sunken ship. With the deed done, Stamper happily reports to Carver about his progress.

At the event for Carver's satellite launch, Carver meets Bond, who implies that Carver had a hand in the destruction of the Devonshire. Sensing that Bond means trouble, Carver uses a pretext to leave Bond and tells Stamper to take care of Bond. Stamper sends his henchmen to lure Bond into a room behind the stage under the pretext of an urgent phone call. Once Bond enters the room, Stamper orders his men to beat him up. However, before Stamper can join them, Bond takes out all the henchmen, and after the last one is defeated, enters the control room and switches off the power, thereby disrupting Carver's presentation, making him the laughing stock of the worldwide media.

When Stamper arrives at the room where Bond was held, he finds all of his men unconscious with no trace of Bond, much to his frustration.

After Carver has decided to execute his wife Paris and leave her at Bond's hotel room, Stamper is posted on the rooftop of a building nearby. He watches Bond drive his car into the hotel's parking garage. When Bond is in the hotel, he sends his men to get Gupta's GPS encoder out of Bond's car. Meanwhile, Bond is held at gunpoint at his hotel room by assassin and torturer Dr. Kaufman, who happens to be Stamper's mentor. When Bond's car proves to be too equipped to break into, Stamper calls Kaufman to make Bond tell him how the car can be opened. Bond uses this to make Dr. Kaufman taser himself with Bond's phone and shoots the assassin. Unable to leave by the front door, Bond climbs off the balcony. When Stamper sees Bond leave, he calls Dr. Kaufman but gets no response, realizing that Kaufman is dead.

When Bond Chinese agent Wai Lin find the wreckage of the HMS Devonshire, they find that one of its cruise missiles is missing. They swim back to the surface, where Wai Lin has her man waiting in a boat. When Lin calls at one of them to help them out of the water, the man gets shot with a harpoon. Stamper then walks to the railing, revealing that he and his thugs have taken over the boat. They capture Bond and Lin and bring them to Carver's skyscraper at Saigon.

There, Carver welcomes the two agents while writing their obituaries. Having a meeting with General Chang, Carver tells them that he will leave them in the hands of Stamper, who will use chakra torture on them. Revealing that he was Dr. Kaufman's former student and thought of him like a father, Stamper tells them that he will make sure to keep them alive as long as possible. However, before Stamper can start his torture, Bond and Lin attack the guard holding them and grab their machine guns. When Stamper tries to get Carver to safety, Bond grabs one of his torture devices and lunges it at Stamper. The device thrusts into Stamper's leg, leaving him injured and angry.

Planning to attack the flagships of both the British and Chinese fleets to cause war, Carver and his men board the stealth ship and head towards the fleet. Bond and Lin board the ship, but are detected by Carver via surveillance cameras. Carver sends Stamper to deal with them. While Bond and Lin plant explosives on the outer part of the ship Stamper swiftly grabs Lin and drags her inside, leaving her with his men. Telling them to kill her if she blinks, Stamper walks out again to kill Bond. However, Bond has killed a security guard and when Stamper shoots at him, he drops the guard's corpse into the water, causing Stamper to believe that he's dead. Stamper then calls Carver and tells him that Bond died.

Stamper then brings Lin to the bridge, where Carver is eagerly awaiting the war. However, when Bond destroys the outer hull of the ship, causing it to appear on the radar of the Chinese and British. Furious, Carver tells Stamper to kill Bond and Lin. While their ship is shot by the British, Carver has them drive away, knowing that he still can launch his missile. This is foiled when Lin destroys the engines.

Fight against Bond and Death

While Stamper and Bond engage in a firefight, the ship is hit by British missiles, causing severe damage. With them the only men remaining, Carver sends Stamper to find Lin in the engine room. Though Stamper manages to capture Lin again, Bond faces Carver at the bridge and kills him by using the Sea Drill. However, while trying to defuse the missile, Bond hears Stamper telling him to stop. Turning around, Bond sees that Stamper has chained up Lin and threatens to drop her into the water to drown her. Bond points out that the entire ploy is over and demands Stamper to let Lin go, but Stamper refuses. Lin throws her detonators at Bond and tells him to blow the missile up while it is still on the stealth boat. When Bond proceeds to do so, Stamper drops Lin into the water and jumps towards Bond, determined to give him an unpleasant death to avenge both Carver and Kaufman's deaths. After a fight, Bond pins Stamper's leg to the missile, preventing him from escaping. When Bond tries to jump into the water below to escape the stealth ship and save Lin, Stamper grabs him at the vest, stating that they will die together. However, Bond tears out of his vest and falls into the water below to save Lin, leaving Stamper as the only remaining man on board.

When the missile goes off, Stamper's foot is vaporized by the blast before he himself is killed in the ship's explosion.

Stamper during the attack on the HMS Devonshire 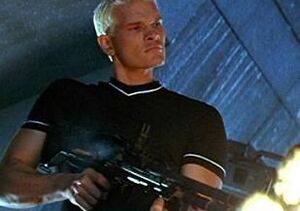