Kill the freaks and sell their bodies

Stanley is the secondary antagonist in American Horror Story: Freak Show. He is a con artist who is working with Maggie Esmerelda to gain access to the Freak Show.

Stanley is a con man with a quick disguise set up for his next scheme. He often works under false names and wears disguises. He'll do anything for a quick buck, even murder.

He is driven by greed and has no moral qualms about inflicting pain and putting others in danger for his own financial gain. Stanley is homosexual. Ironically, despite wishing to take the freak's body parts and put them in a museum for money, Stanley has what some may see as his own "freak" quality. He is an overly well endowed man with a 13 inch penis.

Stanley works at the Morbid Museum of Curiosities, and plans to kill the freaks so that he can sell their body parts for money. Stanley was responsible for the death of Ma Petite, as he blackmailed Dell Toledo into killing her.

In the penultimate episode of the season, Maggie tells the freaks everything about Stanley's conning, presenting him with the perserved head of the museum curator that Stanley had been delivering the body parts of the freaks to. Stanley flees for his life but is eventually caught by the freaks and is later revealed to have had his tongue cut out and all of his limbs severed, dressed in a similar manner to Meep. 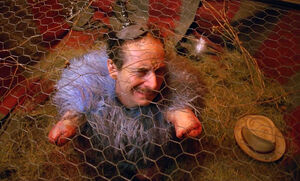 Stanley, after being mutilated