Villains Wiki
Register
Don't have an account?
Sign In
Advertisement
in: Mature, Evil from the Past, Noncorporeal,
and 29 more

Harvesting the brains of the living for his "Soup of Sorrow".

Stanley DeGroot is an antagonist in The Simpsons. Once the chef at Springfield Elementary, he eventually became a serial killer who devoured his victims.

He was voiced by Dan Castellaneta, who also voices Homer's Clones.

In Stanley's legend, Stanley DeGroot was once a chef at Springfield Elementary and all the kids made fun of him because he never graduated from college. One day, Stanley went insane and grabbed a cleaver amidst a crowd of those who mocked him, deciding to add a human-based entree on the menu. Stanley ran round the school butchering and brutally dismembering the children who had mocked him, until there were none of them left. While tasting his new soup known as Kids’ Head Soup, Stanley gleefully remarked "Needs more girl!" and threw in a girl's head. Stanley then presented the soup to the staff the next day for lunch, and they were horrified to discover that their lunch contained parts of their students.

Stanley was immediately arrested for murder and executed by hanging, but the day after this when the authorities decided to check on his grave, they found the entire cemetery he was buried in had vanished.

Stanley DeGroot was now renamed "Dark Stanley" and returned from the grave, so said the legend, and harvested the brains of the living, regardless of whether they were child or adult, and he took them back to the Netherworld for his "Soup of Sorrow."

Eventually, despite no-one ever having seen him, every single child in Springfield Elementary believed and dreaded this ghost, and when Bart Simpson, who was narrating the story, apparently dropped dead with his skull sliced open and his brain spilling out, the kids believed Dark Stanley had appeared, and all ran screaming out of the school.

Bart, who had just been telling this story to get some lunch (Homer had forgotten to give his own kids proper lunches) out of his mates, had actually disguised his "brains" with spaghetti and tomato sauce, and calmly cleaned himself down and helped himself to his classmates' lunches in the empty cafeteria.

Even though Bart Simpson just invented the story to get some lunch, he had to see a psychiatrist, as Principal Skinner recommended to Homer. Homer went to take Bart to a psychiatrist whom he actually befriended. After many days together, both had grown fond of each other and when Bart had told the psychiatrist all he needed to tell her, he left abruptly, feeling relieved to get all his family problems off his chest. Afterwards, the psychiatrist went to her own psychiatrist, who suggested that she was replacing Bart with her own son, who had been 'murdered by Dark Stanley,' to which she said she wasn't ready to go there yet. This statement revealed that Dark Stanley actually existed. 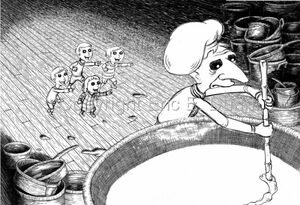 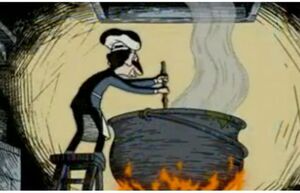 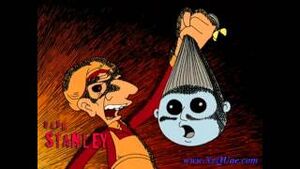 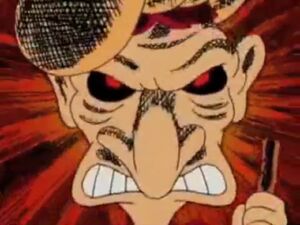 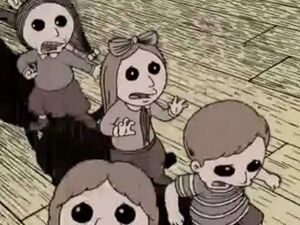 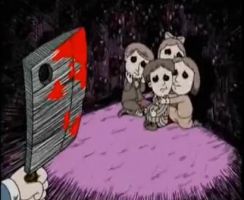 Stanley about to kill the children he served. 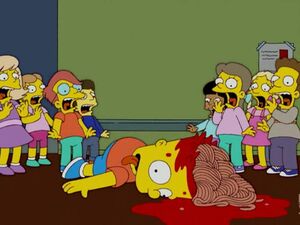