Stanley "Stan" Practice and Sandra Practice (or Mr. and Mrs. Practice) are a pair of one-time villains from the Cartoon Network original series, The Powerpuff Girls, only appearing in the episode "Girls Gone Mild". They are a parody on "Standards and Practices".

Stan and Sandra Practice are characterized very strict couple, who do not want The Powerpuff Girls to fight crime or use their powers, as they believe it is a shining example of the dangerous and senseless violence that happens in their city, as well as being a bad influence on their community's youth. They refuse to acknowledge the fact that The Powerpuff Girls' violence saves their town from even greater and far more deadly threats.

After forming P.A.P.P. - Parents Against Powerpuffs, Stan and Sandra tell Professor Utonium that the girls MUST stop fighting crime by kicks and punches, as they think this might be impressionable to younger kids. They have issued a contract threatening to sue the Professor if the girls don't obey this. In the end, at the brink of destruction brought forward by the Dooks of Doom, the Practices tear up their contract, allowing the girls to save the day once again. After the girls saved the day, it is unknown what happened to the Practices, but it can be implied that after they were saved, they abolished the contract and never bothered the girls again.

Stan is a tall Caucasian man with neatly combed brunette hair, side-swept over his head. He wears thick-rimmed black glasses, a green shirt, light brown khakis, held up by a black belt, and lastly a pair of brown shoes. He has wrinkle lines on his forehead and wrinkles around his mouth.

Sandra is a tall Caucasian woman with finely brushed blonde hair, held together by a red hairband and red pearl earrings of the same hue. She has pinkish red lipstick and blue eyes. She wears a light pink buttoned shirt, a darker pink long skirt, held up by a brown belt, along with a pair of reddish pink high heels.

Stan and Sandra Practice are a couple of fussy, uptight sticklers for rules and safety. They are a persnickety pair of single-minded, no-nonsense perfectionists with a zero tolerance policy for hooliganism or tomfoolery or anything they fear poses a threat toward their community. They only seem to care about themselves, as they didn't raise a finger, when they noticed The Dooks of Doom destroying everyone else's homes, as they believed they were safely protected by their own house's steel windows and doors. However, when The Dooks of Doom broke into their homes and started attacking them, specifically, it was only then, that they changed their minds and ripped up the contract, that previously forbade The Powerpuff Girls from fighting crime. 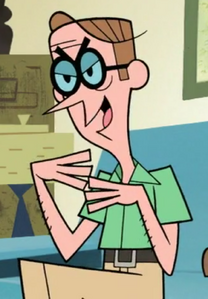 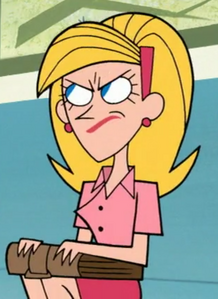 Sandra Practice
Add a photo to this gallery

Retrieved from "https://villains.fandom.com/wiki/Stanley_and_Sandra_Practice?oldid=4089090"
Community content is available under CC-BY-SA unless otherwise noted.