Destroying planets and devouring their energy.
Threatening his subordinates for failing him.

Destroy and consume the Earth.

Star King Bazeu is the leader of Gozma and the main antagonist of the 9th installment in the Super Sentai franchise Dengeki Sentai Changeman.

He is a mysterious being who appears as a giant blue limbless torso hooked up to machinery, and communicates with his subordinates as a hologram floating out in space. Prior to coming to Earth, Bazeu had already conquered numerous planets and subjugated their species. His forces are almost entirely made up of the champions of the planets he's conquered, who are forced to serve him under threat of him finishing the destruction of their planets.

The final episode of the series reveals that the blue limbless torso he appears as is an illusion. His true form is a planet-sized creature known as Gozma Star, which survives off of consuming planets and becomes more powerful with each world he devours.

He was voiced by the late Seizo Kato and physically portrayed by Kazuto Kuwahara, the former of whom also voiced Megatron in the Japanese dub of The Transformers.

Bazeu was originally a planet-like being known as Gozma Star, which grew large by devouring planets. To further his consumption of planets, Bazeu established the Great Star League Gozma to conquer planets for him and prepare them to be consumed. The first planet to be destroyed was the planet Mirellian, home to a race of angelic aliens so peaceful that merely staring at them would cause one to lose all violent thoughts. Bazeu saw their ability to pacify people as a threat to his conquest and thus destroyed their homeworld, though the Mirellians managed to survive by sending a Memory Doll out into space that would seed more of their kind.

As Bazeu conquered planets throughout the galaxy, he used the threat of their total destruction to recruit the champions of the planets to his cause. In exchange for serving in his army, his conquered races would have their planets spared. He once faced a rebellion from inside his forces by General Giluke and Queen Ahames. Though Bazeu put down the rebellion, he chose not to kill either of them and instead sent Ahames to work in a different division of the Gozma.

Bazeu eventually set his sights on Earth, a planet which he felt was much more beautiful than the mostly cold and desolate planets he had conquered in the past. He entrusted Giluke to lead the invasion from Gozma's flagship, the Gozmard, giving him a variety of Space Beast Warriors to command. As the Gozma's Earth invasion bore on, Ahames arrived on Earth to assist the Gozma in conquering the planet and hopefully get Bazeu to restore her homeworld of Amazo in return. While Bazeu had not summoned her, he agreed to allow her to co-command the invasion with Giluke.

Though dissatisfied with Giluke's handling of the Earth invasion, Bazeu permitted him to have one more chance by harnessing the Rigel Aura of Nana and using it to power himself up. After the aura was stolen by Ahames and Giluke was defeated by the Changeman, Bazeu punished him by throwing him inside a black hole that led to a space graveyard.

Despite Giluke's seeming demise, he later resurfaced as Ghost Giluke, having fused with the remains of a Space Beast inside the graveyard in order to survive. Bazeu allowed him to stay and work for the Gozma again, impressed with his tenacity to survive death. Eventually, as the Gozma invasion of Earth proved a stalemate, Bazeu gave Giluke permission to begin using his own crew members as candidates to create Space Beast Warriors from. The first candidate Giluke selected was his own former lieutenant Adjutant Booba. Booba resisted being turned into a Space Beast and was rescued by his former companion Lady Pirate Jill, only for Giluke to kill her. A furious Booba attempted to duel Giluke, but Bazeu interrupted the fight and sent them both back to the Gozmard, allowing Booba to stay untransformed into a Space Beast Warrior.

Bazeu would later have Adjutant Shiima transformed into a Space Beast Warrior, followed by Ahames' pet dragon steed Jangeran. However, the Gozma's invasion efforts became further complicated with the defections of Navigator Gator, Shiima and Booba, the latter of whom died to free Shiima from Bazeu's influence. With few forces remaining in Gozma, Bazeu resorted to transforming Ahames into the Space Beast Maze and sending her on a suicide attack to destroy the Dengeki Sentai's base, an attack which proved successful. Bazeu then directed Giluke to launch a final attack on Earth in the Gozmard, but this attack was stopped by the Changeman. At this time, Bazeu secretly began to approach Earth by hiding in the tail of Halley's Comet, planning to destroy the planet by ramming into it.

However, after boarding the Gozmard, Commander Yui Ibuki was able to hack its computer to find out Bazeu's location, leading the Changemen and their extraterrestrial allies to Gozma Star. Bazeu destroyed the Gozmard to prevent Ibuki and the aliens from discovering his true location, but they were saved by the Changeman and brought onto Shuttle Base just in time. The Changemen discovered that Gozma Star was about to ram into Earth, but soon found themselves lost in space and unable to get back to it. After being guided back to Gozma Star by Sayaka of the planet Mirellian and her Memory Doll, the Changemen landed on the planet to track down Bazeu and find a way to stop it from destroying Earth. Upon landing the Changemen were met by a hologram of Bazeu, who sent strengthened Hidrer Soldiers to attack them. The Changemen attempted to stop Bazeu by firing lasers at him, but his hologram simply blasted them with a jolt of electricity. Ibuki then intervened and transformed into his alien form to attack Bazeu, but Bazeu flung him back at the Memory Doll before devouring him and the Changemen.

Finding themselves inside Bazeu's stomach, the Changemen realize the shocking truth - that the planet they are on is in fact Bazeu's true form. A hologram of Bazeu then appears before them and reveals his true nature to them, before attempting to finish them off. However, the Changeman manage to escape by blasting a hole in Bazeu's stomach with the Change Bazooka and getting Gyodai to enlarge the Memory Doll so they can ride out on it. After escaping, the Changemen form Change Robo to finish Bazeu off while Ibuki and their alien allies escape on board Shuttle Base. Flying up in space, the Changemen used Change Robo to plow through Bazeu and get directly to his core. With a slash from Change Robo, the Changemen destroy the core and blow up Gozma Star, killing the planet eater and putting a definitive end to the Gozma's reign of terror.

Bazeu is a cruel and selfish being, driven purely by a desire to sustain himself and grow stronger by devouring the energy of planets. He cares not for his subordinates and rules by fear alone, using his conquered planets as leverage by threatening to destroy them unless their inhabitants serve in his army. Bazeu is also noted for his low tolerance of failure, having any subordinate who fails him enough times executed. At the same time, if a subordinate of his serves a useful function or manages to prove their strength in some way, Bazeu is all to happy to let them live.

While he seeks to consume planets purely to survive, Bazeu at times is shown relishing at the destruction he as brought to countless planets across the universe, taking joy in the suffering he has caused. He has also shown amusement at his subordinates (particularly Giluke and Ahames) whenever they do something he finds to be especially wicked. 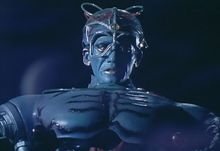 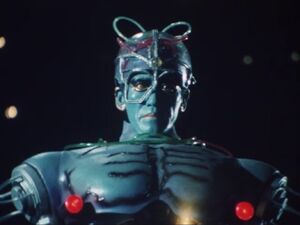 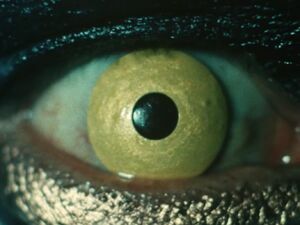 A closeup of Bazeu's right eye. 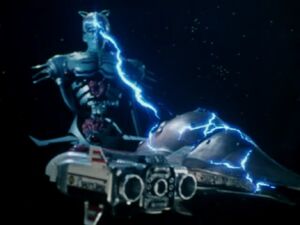 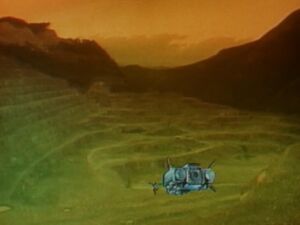 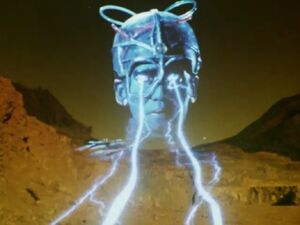 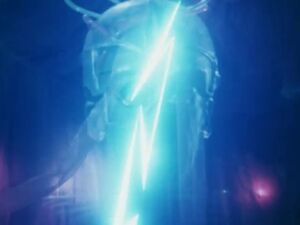