Star Man is one of the eight Robot Masters created by Dr. Wily and a minor antagonist in the game Mega Man 5. He bears the serial number DWN-037. His weapon, the Star Crash, allows him to create stars that circle his body. He can throw these stars to attack.

Star Man is an bronze colored robot with black arms and legs, his left hand is a cannon, he has small stars on his head, his right elbow and both knees, on his body it has a large star facing down with a blue triangle in the middle.

Star Man took over a satellite that he took over. In battle, Star Man will create an three star shield and jump towards Mega Man to damage him. He will stand in the air to throw his shield towards his opponent. His weakness is the water wave. When he is defeated, Mega Man will get the star crash and the super arrow. Star Man returns in the boss rush where he's defeated again.

Star Man is one of the four bosses of the Mega Man from the game gear. His move set is the same. His weakness is the power stone.

Star Man appears in the Mega Man cartoon in the episode "Curse of the Lion Men".

Star Man appears with most of the other robot masters in "Worlds Collide" where he helps Dr. Wily and Dr. Eggman defeat Mega Man and Sonic. 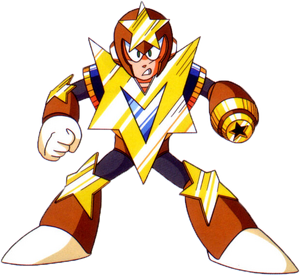 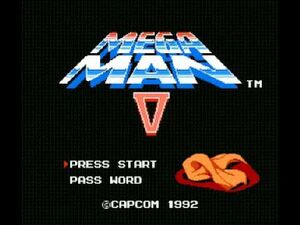