Second-in-command of the Decepticons (formerly)

Leader of the Seekers
Judge of the Quintessons

Overthrow Megatron and take over the Decepticons

Destroy the Autobots
Conquer the Universe
Help the Quintessons destroy his own universe for revenge. (all failed)

Starscream is the leader of the Decepticon Seekers and the main antagonist of Transformers Cyberverse.

He was originally second-in-command to Megatron and the Decepticon Air Commander. After he was banished following a failed attempt to overthrow him and left for dead, he was inadvertently revived by Cheetor and went on to claim the AllSpark. Winning the loyalty of his Seekers by presenting himself as the one chosen by the AllSpark, Starscream attempted to use the AllSpark to destroy both sides, forcing the Autobots and Decepticons to team up to stop him. In season 3, Starscream was mutated into a Quintesson Judge, and attempted to destroy the entire universe.

Starscream serves as one of the main antagonists of season 1 and season 2, as well as the final antagonist of Quintessons Arc in season 3.

Before the Great War, Starscream was friends with Jetfire. In Cube, Starscream took the newly arrived Camien Windblade to a Cube game where he flaunted his upper-class credentials, having Bumblebee be kicked out of the stadium. Attempting to spice up the game, Starscream made his way to the Cubes and reprogrammed the AI in one of them to cause chaos only for Bumblebee and Windblade to foil his plot.

Starscream was part of the rally where Megatron unveiled the Decepticon faction and emblem. Soon enough however, the movement had gone from civil disagreements to open revolution with Starscream derisively greeting Optimus when the "file clerk" tried to deter Megatron's ambitions. Throughout the resulting war, Megatron would mock Starscream for his many failures, leading to Starscream growing increasingly resentful.

Later in the war, Megatron conspired to use Vector Sigma to reprogram the AllSpark and have it birth a new generation of loyal Decepticons. Starscream and the Seekers tried and failed to prevent the Autobots from launching the AllSpark through a space bridge. As Cybertron's condition deteriorated due to the loss of the AllSpark, Starscream led Thundercracker, and Nova Storm to the Grand Imperium where the trio attempted to slay Optimus Prime only to be bested and forced to retreat.

Millions of years later, the AllSpark was tracked to Earth, and Starscream sent Slipstream and a squad of Seekers to Earth while he prepared the Decepticon fleet. After the scouts arrived on Earth, Starscream contacted their shuttle, only for Bumblebee to answer, unknowingly blowing the Autobots cover. In Siloed, after Slipstream had captured Windblade, Starscream contacted her, only to find she had escaped his subordinate. Fustrated at his time being wasted, he swore to demote Slipstream as far he could when he came to Earth.

In Awaken Sleeping Giants, Starscream's fleet entered the solar system, and he contacted Slipstream again, only to find that Shockwave had already arrived, to his fustration. In Eruption, Starscream and his fleet arrived on Earth, only to find the Ark's crew had been awoken. Thus, the Decepticon recommenced their war with the Autobots on Earth.

After ignoring Megatron's order to provide air support, Starscream was finally demoted by Megatron from leader of the Seekers. In anger, Starscream attacked and seemingly slew an injured Megatron, declaring himself leader of the Decepticons. However, just as the Decepticons were preparing to disembark from the moon, Megatron revealed himself to still be alive and brutally beat down Starscream for his treachery before throwing him out of the ship and leaving him for dead on the moon.

However, after Cheetor accidentally exposed him to the energy of the AllSpark, Starscream came online again. Claiming to have seen the AllSpark while he was dead and absorbed its wisdom, Starscream was able to sway the Seekers to his side and persuade them to help him in his plan to achieve godhood. While Optimus Prime and Megatron were dueling over the AllSpark, Starscream was able to sneak in and claim the relic for himself before exiting through a ground bridge. Around the same time, Starscream had his Seekers steal Vector Sigma from the Nemesis and bring it to him so he could use it to combine with the AllSpark and become effectively a god in order to bring peace to the galaxy by returning all the sparks of Transformers to the AllSpark. With the AllSpark in his grasp, Starscream used it to create Scraplets from the souls of dead Transformers to serve as his minions, sending them against anyone who opposed him.

After Acid Storm was able to unlock the secrets of Vector Sigma and use it to merge Starscream with the AllSpark, Starscream turned on his loyal Seeker minions and declared they would be the first souls he returned to the AllSpark, killing them. Starscream then went to confront the Autobots and Decepticons and used the power of the AllSpark to immobilize them. However, using the Matrix of Leadership, Optimus Prime was able to resist Starscream's overwhelming power and drive the AllSpark out of himself, causing him to collapse and fall down. After the battle, Starscream was taken into custody by the Autobots and placed in a cell aboard the Ark.

Imprisoned by the Autobots

Starscream would later come into contact with the Quintessons, who had the mission of judging a universe to deem wether or not it was worthy of existing. The current Judge decided to take the egotistical Seeker and transform him, alongside two others heads, into the judge of his own universe.

End of the Universe

The Judge Starscream decided to judge his own universe guilty, and set out to destroy it and everyone in it, especially all those who wronged him, which was virtually everyone who had ever known him, Autobots and Decepticons alike. However, his plot to wipe out his own universe was foiled, and despite his powers as a Judge, Starscream was finally destroyed once and for all by his old arch foes, Optimus Prime and Megatron. 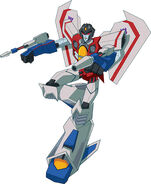