He
Him
God
The Almighty

To drain Ivory from the planet.

The Starworm, often referred to as just Him, is the background main antagonist of the 2018 indie Metroidvania videogame Iconoclasts created by Joakim Sandberg. He is the almighty "deity" of the Tri religion, that believes him to be a god that brought them Ivory and carries their souls to the Paradise. However, Starworm's appearance is only an humongous spaceship machine used by a bird-like alien who uses the planet's Ivory as fuel.

It is believed by a book named The Precedes that the Starworm met mankind in another planet similar to Earth, and was worshiped as a god by the habitants of the Planet. Along with his arrival, he brought a fuel-type magical liquid called Ivory that he used to give resources to his worshippers. This lead to Him having his own religion called The Tri, However, he also brought a deadly, parasite virus called Blue Eye, which could interface with and control mechanical Controllers. These thorny, circular rounded machines have the ability to shape the planet at will as well as kill everyone who disobeys Tri commandments (this execution done by Controllers is called Penance). However, nobody was aware that Starworm was actually a spaceship controlled by a bird alien, and that the planet they lived on was effectively a fueling station.

Outside of religious literature referenced in the plot, the Starworm is absent from the first half of Iconoclasts, although the Ivory fuel and Controllers factor heavily throughout the story. At the start of the game, overconsumption of Ivory by humanity has resulted in strict rationing and attempts to mine the planet's two moons for more fuel, a process that has already resulted in one moon's destruction. In addition, the ongoing conflict between the Tri-worshiping superpower known as the One Concern and the nomadic Isi Pirates, who use seeds that violently destroy Ivory-based technology, has only accelerated the drain on the planet's resources. However, it's not until the protagonist Robin and the Tri's heir apparent Royal both accidentally awaken and subsequently destroy the planet's Omega Controller that the Starworm begins to return to the planet, drawn by a beacon the Controller releases upon its destruction.

News of His impending return to Earth was initially hidden away so as not to cause panic among the general population; meanwhile, Royal was quietly excommunicated for causing the planet's imminent destruction, and the One Concern redoubled their efforts to complete a rocket, with which a select few would escape to a shelter on the planet's intact moon. However, the news of both His return and the One Concern's escape plans eventually were exposed, and were joined by the One Concern leader Mother's death at the hands of Robin and her friends and a coup led by One Concern military commander General Chrome. Avoiding the erupting civil war, Robin decided to use the One Concern's rocket to try and directly communicate with the Starworm at the moon base, and convince him to spare the planet alongside Royal. The plan was able to briefly capture His attention, but the Starworm remained largely indifferent to Royal's attempts at communication; this enraged Royal, who then directly attacked Him and cracked His carapace to reveal Blue Eyes inside. In a fit of rage, the Starworm attacked Royal with a psychic weapon that left him cataconic, and smashed the shelter open before leaving to return to Earth. Robin narrowly managed to reach an escape pod back to Earth, but was forced to abandon Royal.

After landing on Earth, Robin follows the Starworm into an underground cave, where she finds him draining the planet's limited Ivory reserves. Robin challenges Him, and is immediately struck by His psychic hypnosis, but she manages to fight off the weapon's effect and force Him to face her in earnest. By focusing her attacks on the hole in His carapace created by Royal's attack, Robin manages to disable the Starworm and nearly destroy it, but to her surprise, His head opens up to reveal a giant bird-like alien pilot. The bird angrily demands an explanation from Robin for the planet's low Ivory supplies, then tries to kill her with his own engineer's wrench, as well as a remote that controls the damaged Starworm and the planet's innate Controllers. As Robin fights the alien to a standstill, he angrily activates the Starworm in an attempt to kill her, but is accidentally crushed by the malfunctioning spaceship instead. Robin then forcibly plants Isi seeds inside of the Starworm, causing its body to explode with Ivory from within the Earth's core, replenishing the planet's supply and saving it from destruction.

The Starworm Himself has no personality to speak of, being in reality an elaborate space craft. To the unknowing, this silence is typically misinterpreted as ambivalence, further cementing its percieved status as a divine being. The Worm's sole pilot tends to be impatient and impulsive, resorting to violence and its psychic weaponry as a first resort, and actively giving up on attempts at translation to try and kill Robin instead. 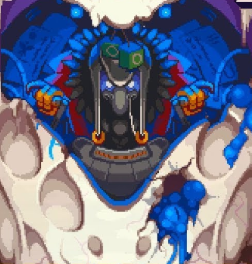 The Starworm's mysterious pilot.
Add a photo to this gallery
Retrieved from "https://villains.fandom.com/wiki/Starworm?oldid=3780107"
Community content is available under CC-BY-SA unless otherwise noted.