Serving Brother Blood and the Brotherhood of Evil.

Criminal Minion
Steamroller is an antagonist from the show Teen Titans. He is an enemy of the Teen Titans.

Steamroller originated in Steel City, where he was captured by Brother Blood and placed under his control. Steamroller was attacked by the Titans East and Cyborg while bursting in a steel mill. They took him down, but not before Steamroller obtained the security codes for the tower of the Titans East by using a probe on Cyborg.

Steamroller's powers are superhuman strength and resilience to damage including surviving being trapped in molten steel due to being a cybernetic villain. His name comes from two cones on his hands that he forms together to make a roller to pin down his opponents. 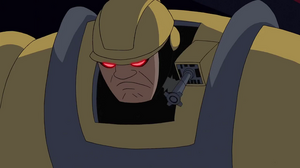