Drones of the Fabrication Machine

Hunt down all lifeforms for the B.R.A.I.N. (succeeded).

The Steel Behemoths are supporting antagonists of the 2009 computer-animated film 9. They are robotic drones designed by the Fabrication Machine to exterminate any lifeforms on Earth.

Each Steel Behemoth stood over 30 feet on two long, powerful legs, allowing them to effortlessly stride over obstacles and crush foot soldiers. Their heads consisted of an armored dome resembling an old-fashioned army helmet, with a single glowing red eye in the center of its "face". Their primary weapon is a heavy-caliber rotary machine gun, which it used to gun down human attackers and destroy buildings. From atop their heads, the behemoths could also launch mortar-like bombs that unleashed a highly toxic gas that quickly and efficiently killed anything alive, including plants.

The Steel Behemoths were commissioned by the Fabrication Machine on the orders of Chancellor Fredinand for the Nation to conquer the rest of the world. The Steel Behemoths apparently succeeded in slaughtering and obliterating practically all in their path on the battlefield during the war. However, the Fabrication Machine went insane and reprogrammed its machines to exterminate all life, so the Steel Behemoths turned on the Nation by massacring all military and civilians alike in sight, even releasing poisonous gas to kill off all other lifeforms.

After life on Earth had been cleansed, the Steel Behemoths disappeared from the sterile wastelands, leaving only the production lines of inactive Behemoths in the Fabrication Machine's factory. It is unknown what happened to the Steel Behemoths, but it can be presumed that over the years after the machines had destroyed most life, the Behemoths perished or deactivated without the Fabrication Machine or any further purpose. 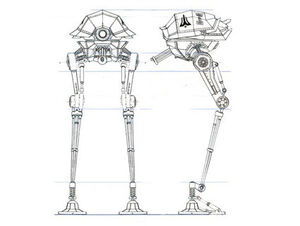 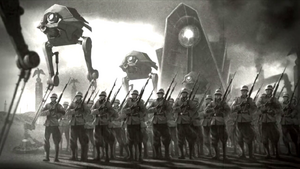 Retrieved from "https://villains.fandom.com/wiki/Steel_Behemoths?oldid=4180384"
Community content is available under CC-BY-SA unless otherwise noted.