Steal the power of the Iron Fist from Danny Rand (briefly succeeded).

Steel Serpent (real name Davos) is a supervillain from the Marvel Comics Universe and the archenemy of the martial artist superhero Iron Fist.

The Steel Serpent is an exiled native of K'un-L'un, and son of Lei Kung the Thunderer named Davos. Davos stole Iron Fist's power and possessed it until it consumed him and Iron Fist absorbed it back into himself.

Davos' spirit was cast into a realm accessible from the Anomaly Gem, and through that Davos used the Contemplator to gather the fragments of the Anomaly Gem and release himself. Then, he again battled Iron Fist and stole his power; Davos then returned to K'un-L'un and took over his father's reign. Lei Kung allied with Iron Fist, who defeated Davos and restored Lei Kung's rule.

Enhanced via the consumption of the life forces of the Crane Mother's daughters. Davos allied with HYDRA against Iron Fist in a plot to obtain Rand-Meachum's Randrapid train to build a tunnel through the K'un-Lun mountains. Davos located Randall in an opium den in Bangkok, Thailand and reported this to the Crane Mother, who sent a pair of her daughters to investigate. Agents of Davos, posing as NYPD, picked up Randall as he arrived in a US airport, but Randall determined the truth and broke free. Davos met with Xao, spokesman for HYDRA's front company, Wai-Go, expressing his displeasure at HYDRA's failure. After slaying a HYDRA agent who had failed to engage Iron Fist, Davos sent other agents to bring in both Orson Randall and Daniel Rand. Slaughtering a group of HYDRA agents in a training session, Davos then took out two whole legions of HYDRA agents and destroyed a Mechagorgon. He then contacted the Crane Mother, asking for a dozen or more daughters to allow him to reach his power's peak to stop his foes. Crane Mother agreed to the request.

Crane Mother sent over a dozen daughters to Steel Serpent, along with the warning that if he failed they would consume his immortal soul. Davos led HYDRA agents and Crane daughters to Rand Corporation HQ to kidnap Jerryn Hogarth for Xao but Luke Cage and the Daughters of the Dragon were already there to protect Hogarth. When the Iron Fists arrived outside Rand HQ they were confronted in the street by Davos's army. Maintaining his power by consuming the Crane daughters' life forces, Davos eventually attacked Orson Randall, who let Davos kill him so he wouldn't have to keep running (or so he said at the time but his true motivation would only be revealed much later). Randall gave Rand his chi, enabling him to drive off Davos, who vowed to face him again in the Tournament of the Heavenly Cities.

When it was Davos' time to enter the tournament, he was approached by the Prince of Orphans to reveal his new Warrior's name since he was representing Kun-Zi for the first time, to which he chose "The Steel Phoenix". Davos now displays wings at either side of his serpent tattoo to mirror this.

Early in the tournament, Davos faced Tiger's Beautiful Daughter. During the contest, she severed Davos' hand. Enraged, Davos concentrated his chi into a new hand and proceeded to viciously beat his opponent to near-death, even refusing to let her yield. The next day, the old and wise Prince of Orphans challenged Davos to a fight instead of his scheduled opponent, Fat Cobra. Davos accepted and watched as his opponent turned into a green mist of chi and was swiftly dispatched by the old fighter, who then declared such brutal tactics as Davos' would not be acceptable for future matches.

Later, Davos took part in the rebellion of K'un-L'un, after his father forced him to recognise the potential treachery of his allies by asking him to consider the possibility that there might another angle that he had not anticipated rather than constantly assuming that he was always right. He helped defeat Yu-Ti, leader of K'un-L'un, and began a process of redeeming himself in the eyes of his peers. His father, Lei Kung the Thunderer, who has taken over leadership of K'un-L'un, charged him with guarding a dragon egg, from which Shou-Lao the Undying shall be reborn for the next Iron Fist to fight.

Davos appeared as a supporting character in the first season of Netflix's Marvel's Iron Fist and returns as the main antagonist of the second season taking on the Steel Serpent mantle. He is portrayed by Sacha Dhawan. 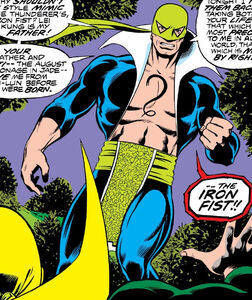 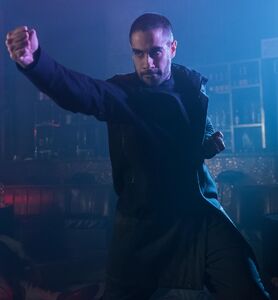 Davos appearing on Marvel's Iron Fist.
Add a photo to this gallery 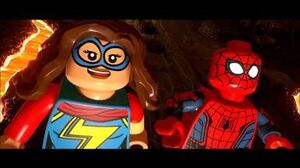 Retrieved from "https://villains.fandom.com/wiki/Steel_Serpent?oldid=3985810"
Community content is available under CC-BY-SA unless otherwise noted.