Kill the intruders of Lockdown's ship.

Steeljaws are minor antagonists of the 2014 film Transformers: Age of Extinction. They are technorganic guard dogs who are under the command of Lockdown who are used for hunting down intruders & prey that venture into the ship.

They are first seen amongst Lockdown's crew of mercenaries when he meets with Attinger on the ship for a talk.

Later, when the ship's anchor cables are unexpectedly launched, Lockdown sends a pack of Steeljaws to hunt down the intruders & kill them for trespassing. Some chased Tessa but manages to escape them.

When she, Cade and Shane attempts to flee using the cable wires, the Steeljaws manages to locate them & some attempted to capture them by climbing on the ropes, only to be shot down by Cade.

The rest began to chew the cables apart, attempting to make them fall to their deaths, only to fail as Bumblebee arrives by shooting at them & saving the humans. It is unknown what became of the remaining Steeljaws when Galvatron took over Lockdown's ship. 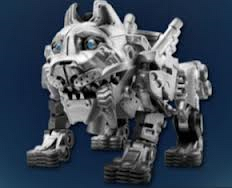 Steeljaw as seen in the Dark of the Moon toyline.
Add a photo to this gallery

Retrieved from "https://villains.fandom.com/wiki/Steeljaw_(Transformers_Film_Series)?oldid=2854759"
Community content is available under CC-BY-SA unless otherwise noted.