Steely Dan is one of DIO's assassins and a minor antagonist in JoJo's Bizarre Adventure: Stardust Crusaders. He uses the Stand known as The Lovers.

In Japanese, he was voiced by Mitsuaki Madono in JoJo's Bizarre Adventure: Heritage for the Future and by Daisuke Kishio in the anime. He was voiced by Grant George in the latter's English dub.

Steely Dan is one of the many stand users hired by Dio to kill Jotaro and his allies before they reach Egypt. Joseph first meets him when he is disguised as a store clerk. Dan's stand activates first by killing Enya Geil. Upon seeing this, Jotaro punches him and somehow, Joseph feels the same effect as him. The stand had got into Joseph's body very quick. So in order to stop The Lovers, Polnareff and Kakyoin shrink their stands to microscopic size and send them inside Joseph. Meanwhile, Steely Dan and Jotaro walk around town in Pakistan as Steely abuses our hero, such as using him as a bridge, making him scratch his back and even making him steal an expensive bracelet getting store clerks after him. When the Lovers was defeated, it tried to get to Jotaro but he catches it. The Lovers then tries to sneak through a girl at which point Steely Dan prepares to cut open Jotaro. Before he could do anything, he realizes that The Lovers has been tied up by Kakyoin before it left Joseph. Then, Jotaro proceeded to beat up Steely multiple times then sends him flying into a wall. Jotaro leaves a note then leaves him.

Steely Dan's Stand, The Lovers, is a microscopic insect, using its size to both enter into others to implant DIO's flesh buds inside their brain. Once there, he will attach itself to the nervous system of the victim, and any pain inflicted on Steely Dan will be inflicted twice as hard on the victim. Furthermore, The Lovers can use brain cells to both disguise and duplicate itself. 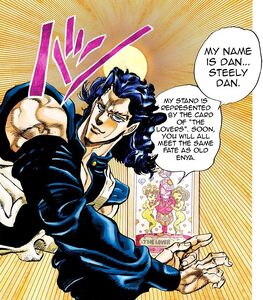 Steely Dan in the manga. 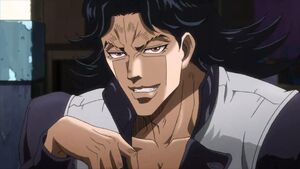 Steely Dan in the anime. 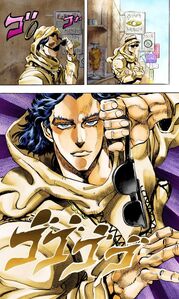 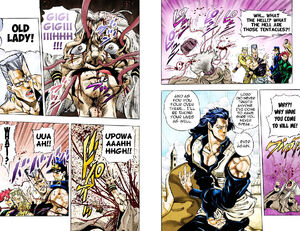 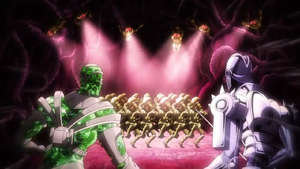