Member of the Savage Six

Genius-level intellect.
Ability to transform into a large bipedal Stegosaurus-like creature.
When transformed: Superhuman strength, speed, stamina and durability. Sharp claws and teeth. Spiked tail. Ability to control or manipulate any dinosaur and the reptilian part of the brain in any life form.
Ability to drain life force from others through physical contact (formerly).

Convert humanity into dinosaur-like creatures and rule the world (ongoing).
Destroy Spider-Man, Black Panther, Ka-Zar, and anyone else that gets in his way (ongoing).

Vincent Stegron was hired by S.H.I.E.L.D. to work with Dr. Curt Connors to study DNA of dinosaurs from the Savage Land. Inspired by the experiment that turned Connors into the Lizard, Stegron stole some dinosaur DNA and injected himself with it. In moments Stegron transformed into an orange semi-humanoid Stegosaurus-like creature. Stegron gained the ability to command real dinosaurs, and he planned to use them in his plans for conquest of the world and converting all of humanity into creatures like himself. Taking several dinosaurs with him from the Savage Land to New York City, he encountered Spider-Man, Black Panther, and Ka-Zar. During the battle that followed, Stegron was beaten by being knocked into a nearby river and seemingly drowning.

Months later, Stegron returned and blackmailed Connors into helping him restore several dinosaur remains from a museum. Connors did what Stegron asked and accidentally turned into the Lizard. The two reptile-men clashed as Spider-Man arrived and later Stegron was sent into hibernation by the extremely cold temperatures the weather was producing.

Months later Stegron, now back in his human form, woke from hibernation and wandered New York. During a battle between the Vulture and Spider-Man, Stegron regained his dinosaur form and powers and joined many of Spider-Man's enemies (including Doctor Octopus, Vulture, Rhino, Beetle, Boomerang, Answer, Swarm, Strikeback (formerly Ringer), and Hardshell) in an all-out battle to defeat him. Stegron was knocked unconscious and was taken in by the authorities.

Stegron eventually returned to the Savage Land, where he took over a S.H.I.E.L.D. installation which drew the attention of Thunderstrike, Black Widow, and Black Panther. During the battle over the installation, Stegron was forced into an extremely cold environment and again went into hibernation. Sometime later, Stegron managed to awaken from his slumber and terrorized Roxxon Oil (which they were illegally drilling in the Savage Land). Soon, Stegron was opposed by Ka-Zar, Shanna the She-Devil, and Spider-Man. During the battle, the Hulk and a gigantic bird/ox-like creature known as Chtylok arrived and helped Stegron fight Roxxon Oil. The heroes joined forces with Stegron when they realized he was trying to protect the Savage Land. Eventually, Stegron managed to scare the Roxxon agents and was left in peace in the Savage Land.

Sometime later, Stegron (reverted to his human form) exiled himself to wander the Arctic Circle when he stumbled upon the Rock of Life. Inspired by its de-evolving abilities, he took it with him back to New York where he slowly began to transform back into his dinosaur form. He then sent the Rock to a friend of his, who then put it on display at the Museum of Natural History in hopes that it would devolve the inhabitants of New York City into prehistoric creatures like himself with him as their leader. As a result, various heroes and villains with connections to the animal kingdom such as Spider-Man, Puma, Black Cat, Vulture, Lizard, Man-Wolf, and Vermin were affected by its power, causing an increase in their savagery. Spider-Man maintained control, and he discovered Stegron's plans at the museum where the two battled. With the help of Mister Fantastic and the Invisible Woman, Spider-Man managed to stop the Rock's powers from reaching others in New York using a piece of his armor. He then beat Stegron into submission. Stegron was then taken into custody by the authorities as the Fantastic Four placed the Rock in a secure vault in the Baxter Building.

Stegron again returned to the Savage Land, but shortly after his return, Roxxon Oil attacked again, intent on obtaining Vibranium. Stegron was recruited by Ka-Zar and Brainchild to help fight the attackers.

Stegron was later seen in the Negative Zone's Prison during Secret Invasion. Somehow, he escaped and returned to the Savage Land. While there he happened upon the starving Devil Dinosaur, who had slumped into a depression after his companion Moon-Boy was kidnapped by S.H.I.E.L.D. agents. Fearing for the survival of the beast (as it was the last of its species), Stegron left the Savage Land without informing Ka-Zar to wage war on S.H.I.E.L.D. Building an army of reanimated dinosaurs, Stegron marched across the US, attacking military base after base, searching for the missing primate. He met little opposition. His only serious challenge coming from attacks by the Fifty State Initiative. Eventually, due to the help of their new recruit Reptil, Stegron was defeated and taken into custody. Learning the motive behind his attack, they agreed to return Moon Boy to the Savage Land to be reunited with his companion.

Stegron later collaborates with Sauron in a plan to turn humanity into dinosaurs where they fought Spider-Man and the mutant students from the Jean Grey School for Higher Learning. The duo's plans are unraveled by their own infighting, purposely exacerbated by their mutual crush Shark Girl who caused their powers to neutralize each other.

Stegron is later revealed as the mastermind behind a monster attack on a church. After Eddie Brock discovers one of Stegron's dinosaurs and delivers it to Liz Allan, CEO of Alchemax, he heads down the sewers and finds his lair, until he is spotted and captured. Venom then manages to escape with help from Moon Girl and Devil Dinosaur, who were investigating the dinosaur attacks. When Venom and Moon Girl return to the hideout, Stegron takes control of Devil Dinosaur and sends him to attack them.

In the Marvel Adventures universe, the Avengers encounter Stegron in the Savage Land

During the Secret Wars storyline, a variation of Stegron lives in the Battleworld domain of Spider-Island. When Vincent Stegron was infected by the Spider Queen's Spider Virus, he was inducted into her Brain Trust. This lasted until Agent Venom and his Resistance attacked their base where Agent Venom gave Vincent Stegron his serum which transformed him into Stegron as he sides with the Resistance. Stegron later works with Iron Goblin on a Retro-Generation Ray where the Resistance had to relocate to Avengers Mansion. Stegron later broke into the American Museum of Natural History where he used the Retro-Generation Ray on the dinosaur remains causing the dinosaurs there to live again. After Agent Venom and his symbiote sacrifice their lives to get the Spider Queen to fall into Columbus Circle, Stegron and his fellow dinosaurs ate her. Some days later, Stegron joined up with the re-assembled Avengers where he helped to rebuild Avengers tower and was present when Dino-Thor swore Spider-Man in as the new Baron of Spider-Island.

Stegron has superhuman strength, speed, stamina, and durability. Stegron possesses a prehensile tail, which he can use as a weapon or to grasp items, as well as sharp claws and teeth. His skin is very durable and is virtually bulletproof. Stegron also has the mental ability to control or manipulate any dinosaur in an unknown area around him. He has exhibited the power to control or manipulate the reptilian part of the brain in any life form.

During their ill-fated alliance, Sauron granted Stegron the ability to drain life force from others through physical contact. 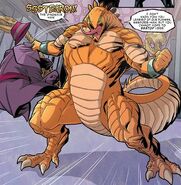 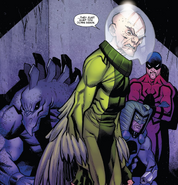 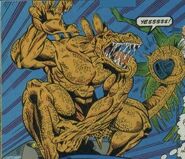 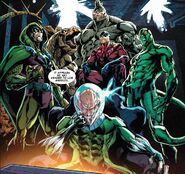 Add a photo to this gallery
Retrieved from "https://villains.fandom.com/wiki/Stegron?oldid=3460548"
Community content is available under CC-BY-SA unless otherwise noted.