Stelio Kontos is a Greek bully who made Stan Smith's life miserable and he appeared in the episode "Bully for Steve" of American Dad!.

When Stan Smith was in high school, he was tortured and teased by the young Greek student, Stelio. Stelio then moved away. Stan could never forget these horrible times or even the bully who tormented him.

Years later when Stan tries to toughen Steve up, Stan recounts his beatings at the hands of Stelio which stopped when Stelio moved away.

Things soon blow up in Stan's face when Steve locates Stelio at Klinko's copy store through Facebook and hires him to beat Stan up until he surrenders and agrees to stop picking on Steve. Stelio also appears to be very strong, due to him being able to over Stan. When Stan says "They're up the stairs! For the love of God, you got the oranges up the stairs!", Steve accepted it and called off Stelio, therefore Stelio Kontos himself was no longer needed and his job was done.

Stelio returns in The Full Cognitive Redaction of Avery Bullock by the Coward Stan Smith. He was hired by Roger to beat up Steve in an attempt to settle the latter's bully problem, because according to Roger "bullies hate sloppy seconds". The plan doesn't work when the new bully still beats up Steve, leading the latter, in anger, to send him to find and beat up Stelio, as revenge, similar, if not in execution, to his plot against Stan in the former episode. This backfires when the new bully begins fawning over Stelio, and the two decide to beat up Steve in tandem. 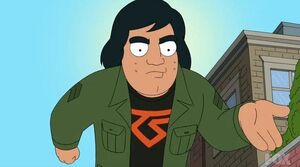 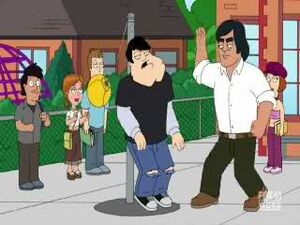 Stelio continues to beat up and slap Stan Smith. 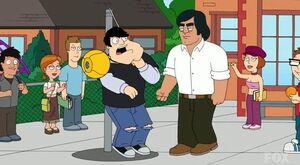 Stan becomes strangled during a game of tetherball with Stelio. 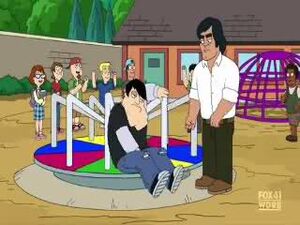 Stelio still torments Stan Smith, this time by spinning him around on a roundabout. 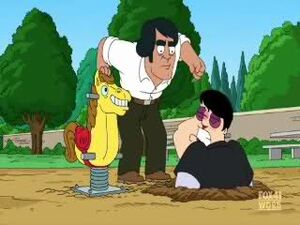 Stelio continues to taunt and torture Stan Smith.
Add a photo to this gallery

Retrieved from "https://villains.fandom.com/wiki/Stelio_Kontos?oldid=3775197"
Community content is available under CC-BY-SA unless otherwise noted.