-Stay alive and away from the death or "scary things"

-Be with Shinn Asuka.

Stella Loussier is one of the three extended pilots from the Phantom Pain as well as the tragic antagonist from Mobile Suit Gundam SEED Destiny.

She was voiced by Hōko Kuwashima in the Japanese version, and Lalainia Lindbjerg in the English version.

Stella is a mentally unstable, temperamental, hotheaded and fragile person. Though it was never fully revealed, it is suggested that she suffered severe psychological trauma as a child from the horrors of war. When she is at her best, her personality is that of an innocent child. She is playful, carefree, and empathetic, so she has a limited understanding of her surroundings. Because of her childlike behavior, she is useless and unproductive for battle unless focused. It is why she was mentally conditioned to react to "die" or "death".

Seeing how she is fearful, reluctant and pusillanimous of dying, Stella's teammates often would use "die" to trigger her to focus. Even though she is a talented MS pilot, her mind is still the mind of a frightful little girl and often needs direction for action. Her teammates would often direct her wrath upon specific targets, telling her that her opponent is out to kill them all. Because she completely trusts her teammates, she takes action without question. Unfortunately, her own fear of death can be a liability in battle. It is necessary to bring out her anxiety to get Stella to battle, but at times the fear can be so overwhelming that she experiences hallucinations and delusions, at times lashing out to both friend and foe. If Stella's teammates can't successfully calm her fears, the best they can do is either wait it out or sedate her.

Her experiences are manipulated by her commanders and doctors. If Stella experiences something that can potentially contaminate her mind, it can be removed. It is because of that, Stella can at times experience déjà vu, familiarity to people or objects, but at times nothing at all if the mind wipe is sufficient. This is all done for Phantom Pain to manage her fragile mind without her losing direction in their mission.

Stella is a fully trained soldier and a Extended. Because of her enhanced abilities, her body and mind can react just as well as a Coordinator. Even though her mind is childlike, when focused, she can hack and reprogram an entire MS operating system and customize it for personal specifications within seconds. As a soldier, she knows how to use firearms, stealth infiltration tactics, and MS piloting. Because "Extended" soldiers aren't perfected for war, they all suffer psychological and physical side effects from their enhancements. Their bodies are often maintained by a full medical team, ready with drugs and advanced medical devices to keep them functioning. However, their conditions are often difficult to manage and their lifespan is often limited to a few years due to their unstable nature and being used as living instruments of war. When not on the battlefield, Stella is shown to have the skill of dancing but has no ability to swim.

Together with her comrades Sting Oakley and Auel Neider she infiltrates the PLANT colony Armory One and with the help of some ZAFT-soldiers they steal three new Gundam-type mobile suits. Stella becomes the pilot of the ZGMF-X88S Gaia. They heavily damage the base inside the colony and fight against Shinn Asuka in the ZGMF-X56S Impulse. During the battle it appears that when someone mentions the word “die” she completely goes berserk. Stella and the two boys nevertheless escape from the base on the Mirage Colloid-equipped ship Girty Lue but are pursued by the ZAFT-battleship Minerva. After the “Break the World” incident the Phantom Pain is stationed on Earth on the carrier John Paul Jones and Stella is later engaged in another battle with Shinn. During her stay on Earth she meets Shinn personally when he saves her from drowning after she falls from a cliff, but neither of them knows who the other is.

She panicked when he said her block word, "die", Shinn, knowing that Stella was scared to die, he hugs her and tells her that she won't die. He also told her that he will protect her. Stella, knowing that was the same phrase that Neo said to her, she starts crying in Shinn's arms. He apologizes for scaring and upsetting her, and tells her to stop crying. He wraps a handkerchief around her ankle to stop the bleeding. Stella takes Shinn's hand, puts it on her face, asking him if he will protect her.

He says that he will protect her. Stella became attached to Shinn and they grew closer to each other. Shinn builds a campfire to dry his shirt and her and dress. When she stood up to get a pink shell, he felt embarrassed around Stella because she is topless. During this time Shinn swears to protect her, but when she comes back to the Phantom Pain her memories are erased. When the Minerva is attacked by the joined forces of the Earth Alliance and the Orb Union Stella again fights against ZAFT and during this battle she inadvertently kills the new pilot of the Minerva, Heine Westenfluss, whose unit was disabled by Kira Yamato. When the Minerva investigates the extended facility in Lodonia – the place where the Extendeds are created – Stella attacks the Minerva but is defeated by Shinn and Athrun Zala and becomes a prisoner on the Minerva.

But because of the changes in her body her condition becomes worse and to save her life Shinn violates orders and brings her back to the EA. Although the EA stabilize her condition she is assigned to be the pilot of the gigantic mobile suit GFAS-X1 Destroy. With her new suit she destroys many cities in West-Eurasia until she reaches Berlin. There she is engaged in a fight with Kira Yamato in the ZGMF-X10A Freedom and later Shinn also joins the fight and again Shinn and Stella are enemies on the battlefield. When Neo tells Shinn that Stella is the pilot of the Destroy he tries to calm her with his words and is partially successful but when she sees Freedom she attacks again and in return Kira attacks the cannons above the cockpit of the Destroy which causes explosions that mortally injures Stella.

Shinn rescues her out of the cockpit, she tells him that she loves him and she finally dies in his arms. Shinn then brings her dead body and sinks it in a nearby lake, swearing to avenge her death at the hands of Kira Yamato. After the Destiny is crippled in the final battle by the Infinite Justice, Stella appears to Shinn as either a ghost or a hallucination. She tells Shinn she was happy that she was at peace because Shinn gave her a yesterday and told Shinn she'd see him again tomorrow before disappearing. 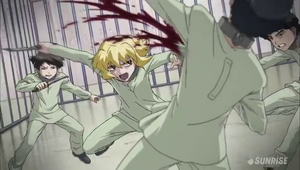 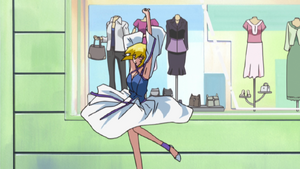 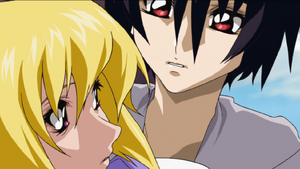 Stella look at Shinn for the first time 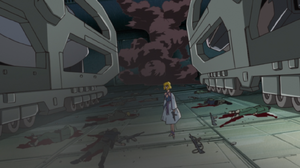 Stella after finish her attack 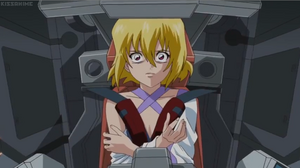 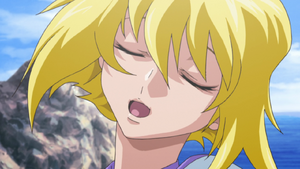 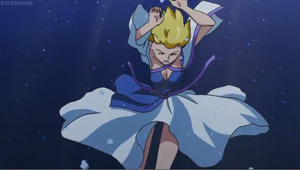 Stella fell from a cliff and drowned 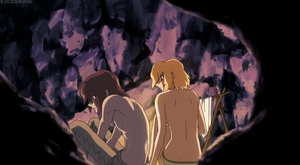 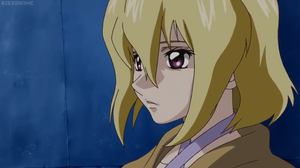 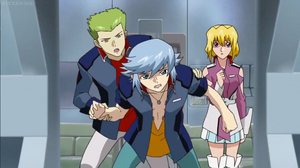 Sting Oakley try to stop Auel to find his mother 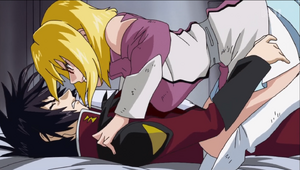 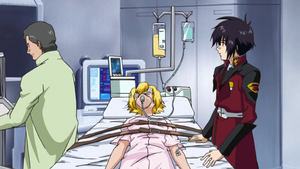 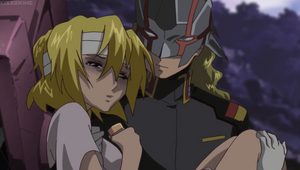 In very critical condition, Stella being taken back to Neo Roanoke by Shinn 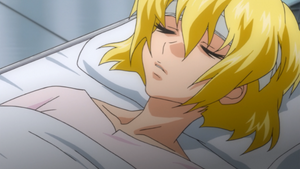 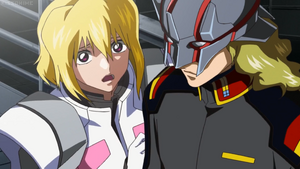 Stella ask Neo if he will die too 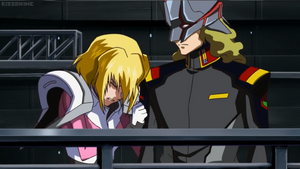 Stella scarred after hear that she and he will die 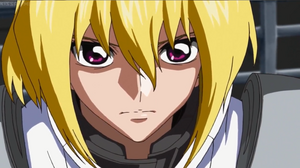 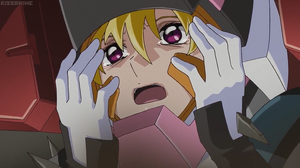 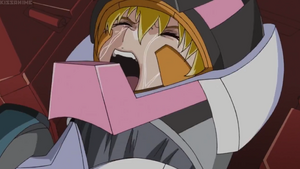 Stella mental breakdown by her paranoid 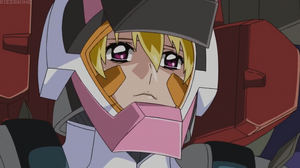 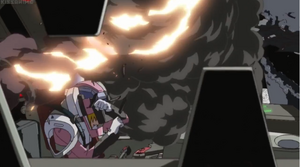 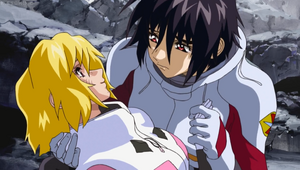 Reunite with Shinn before her death 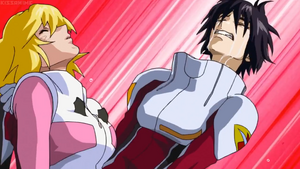 Stella death
Add a photo to this gallery

Retrieved from "https://villains.fandom.com/wiki/Stella_Loussier?oldid=4128988"
Community content is available under CC-BY-SA unless otherwise noted.