Greedy Businesswoman
Stephanie Gaunt is the main antagonist of the Wizards vs. Aliens episode "Friend or Foe".

She was portrayed by Ruthie Henshall.

Stephanie is an Unenchanted (non-magical) woman who owned a hi-tech company called Gaunt Technologies, but she kept herself out of the public eye.

Gaunt wanted to prove magic existed so she sent one of her employees Adams to kidnap a wizard named Tom Clarke. Adams also takes a Nekross named Lexi (who was disguised as a human woman named Lucy).

After finding out Lexi was an alien, Gaunt decided to try and use Tom's magic and Lexi's Nekross technology for world domination and tries to get them to teleport the Crown Jewels to her. However, Tom and Lexi work together and trick Gaunt and escape.

Lexi's brother Varg later disguises himself as Gaunt and told Adams that the prisoners had escaped, before him and two guards to find them. Gaunt is then taken by Lexi to the Nekross's ship The Zarantulus where she meets the other Nekross including Lexi and Varg's father Nekross King whom she tries to get to ally with her but he refuses and Gaunt is fed to his pet Skorpulus, as punishment for kidnapping Lexi. 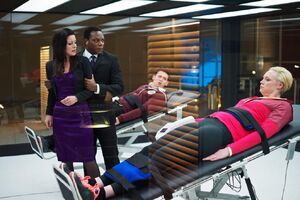 Gaunt with her employee Adams, Tom Clarke and Lexi (as Lucy). 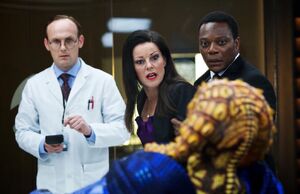