Stephie
The Purple Princess of Pomp

Playing the piano
Training her dog
Having slumber parties

Stephanie Knightleigh is the main antagonist of the Edgar & Ellen franchise. She is the daughter of the wealthy mayoral family of Nod's Limb. In the television series, her villainy ranges from inconveniencing to abusing her rivals: the protagonists Edgar and Ellen along with their caretaker Ronan Heimertz. However, in the Gothic book series, which seemingly takes place after the TV series' chronology, her character is vastly more sinister, engaging in malicious, and often criminal acts including fraud, and even murder.

Her TV counterpart is voiced by Ashleigh Ball.

Despite being a teenaged girl, Stephanie is incredibly intelligent- easily able to influence her father, who in turn, easily influences the town with his mayoral position. She is also incredibly sadistic, taking great pleasure in humiliating her enemies every opportunity she gets. She is a control freak, who's ultimate goal is to have everyone bend to her will, which is why she hates Edgar, Ellen, and Ronan so much, as they refuse to do so.

Apart from hating the Tower Mansion residents, she also hates her genuinely kind younger brother Miles, as he is the only member of the Knightleigh family who seems even moderately capable of helping someone other than himself.

In Crushed Stephanie is seen to be livid when a girl named Ursula goes to the school's dance with Edgar. The reason for this is unclear, but it's possible that she may have (had) feelings for Edgar, which explains her particular dislike of Ellen, who is more important to Edgar then she is. This is yet to be confirmed, however, as Stephanie has also made several attempts on Edgar's life.

The book version of Stephanie is even more sociopathic and less likable; she had no qualms resorting to methods such kidnapping, brainwashing, animal cruelty, torture, and the killings of random people to achieve her duplicitous goals.

Stephanie was a recurring antagonist in the TV series, being portrayed as a snobbish, arrogant young girl who rivaled Edgar and Ellen- as they were the only people in town who she could not manipulate. She commits a plethora of incredibly petty villainous deeds throughout that include, but are not limited to:

Unlike the TV series, the book series has a continuing storyline about Stephanie's father attempting to build a hotel over Gadget Graveyard, and Edgar and Ellen's attempts to stop it. Stephanie's character is more ruthless in this version.

Stephanie arguing with Edgar and Ellen. 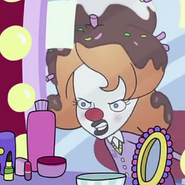 Stephanie with her brother, mother, and father.

Stephanie's sadistic smirk.
Add a photo to this gallery

Retrieved from "https://villains.fandom.com/wiki/Stephanie_Knightleigh?oldid=3563931"
Community content is available under CC-BY-SA unless otherwise noted.