Ruin the reputation of Hercule Poirot and get away from his crimes (failed).

Driving others into murder and execution

Stephen Norton (also known as Mr. X) is the main antagonist of Agatha Christie's last Hercule Poirot novel, Curtain: Poirot's Last Case, and is one of the foremost antagonists of the whole novel series about Hercule Poirot. He disguised himself as an innocent man, but he is responsible for numerous murders Poirot investigates by manipulating innocent people to do dirty work for him while he himself escape justice.

Aidan McArdle portrays Norton in the TV episode adaption of Curtain, which is also the whole TV series' final episode. Therefore, Norton is the final villain of Poirot series, in both books and the TV series.

Mr. X was a mysterious person who was unsuspected of involvement in five previous murders, in all of which there was a clear suspect. Four of these suspects have since died (one of them hanged); in the case of Freda Clay, who gave her aunt an overdose of morphine, there was too little evidence to prosecute. A heavily illed Poirot called the recently widowed Hastings to join him in solving this case, right inside a hotel which was once Styles Court, the place when Poirot and Hastings solved their very first teamwork case.

It was assumed that X is among the guests at Styles Court with them. Among them, there was Stephen Norton, a bird watcher. The old house was now under new owners, Colonel and Mrs. Luttrell. The guests know each other, with this gathering initiated when Sir William Boyd-Carrington invites the Franklins to join him for a summer holiday stay. The five prior murders took place in the area, among people known to this group.

While Hastings and Elizabeth are out with Norton, Norton claimed that he saw something that disturbed him through his binoculars, but he was always vague about whoever he saw. As Hastings drawing his conclusion, Norton was still concerned over what he saw days earlier when out with Hastings and Cole. As an advice, Hastings convinced Norton to confide in Poirot, to which Norton complied.

That night, Hastings is awakened by a noise and saw Norton entering his bedroom. The next morning, Norton was found dead in his locked room with a bullet-hole in the center of his forehead, the key in his dressing-gown pocket and a pistol nearby.

Unknown to Hastings, Norton was the real Mr. X, who confronted Poirot after revealing his true nature. As X, Norton demonstrated his abilities of psychological abuse upon people like Colonel Luttrell, Hastings and Mrs. Franklin, applying just such psychological pressure as was needed to provoke someone to commit murder. His victims were unwary what was happening when they were placed under Norton's control.

Fortunately, discovering Hasting was about to fall under Norton's control, Poirot intervened with sleeping pills in Hastings' hot chocolate that night, in order to avert a disastrous rash action. Ironically, Hastings had intervened in Mrs. Franklin's plan to poison her husband earlier, by turning a revolving bookcase table while seeking a book to solve a crossword clue (which was named Othello, one of the most famous tragedy by William Shakespere), thus swapping the cups of coffee, causing Mrs. Franklin to poison herself instead.

In the meantime, Poirot sensed that Norton had been deliberately vague about whom he had seen through the binoculars. He suspected that Norton would hint that he had seen Franklin and Judith, to implicate them in the murder of Mrs. Franklin, not inadvertent suicide as it was. This explained Poirot's testimony at her inquest, to ensure the police would stop their investigation.

Given his very weak heart, Poirot realized that he must end the string of murders by killing Norton before his own time was up, since no evidence were applied to sue the killer. At their meeting, Poirot told Norton what he suspected. Norton confessed, and he challenged Poirot over blowing up the detective's reputation, since Poirot had no proof to prove Norton ever killed anyone.

However, Poirot revealed he would execute Norton. He gave Norton hot chocolate. Norton, arrogant and self-assured, insisted on swapping cups. Determined to stop Norton, Poirot had drugged both cups, knowing that himself had a higher tolerance for a dose that would put Norton to sleep.

After subduing Norton, Poirot carried the sleeping Norton back to his room using the wheelchair, dropping his feeble facade and could walk. Then, Poirot disguised himself as Norton by removing his wig and false mustache (something that was already demonstrated in The Big Four and foreshadowed in The ABC Murders), ruffling up his grey hair, then donning Norton's dressing-gown and walking with a limp.

Since Poirot was in the same height with Norton, he successfully convinced Hastings that Norton was alive after he left Poirot's room. Soon, Poirot shot Norton, killing him, and locked the room with a duplicate key.

Four months after Norton and Poirot's death, Hastings received a manuscript written by Poirot in his final moments. Poirot explains all about the murder case and its aforementioned solution, revealing the real X was none other than Stephen Norton, a man who had perfected the technique. In the letter, Poirot also compared Norton as Iago in Othello.

It was revealed that after killing Norton, Poirot then wrote his story on the letter and refused taking his amyl nitrite heart medicine. Believing he had to depend on God to judge his final act, Poirot felt complicated over his act to commit murder, but on balance he was convinced that he prevented Norton from harming more people. He believed it was the true way to enforce his justice.

By the end of the letter, Poirot suggested that Hastings should pursue Elizabeth Cole, a wish that was typical for a constant matchmaker like Poirot, before lamenting the lost days when everything between him and Hastings started in Styles Court and ended in the very same place, believing they were "good days".

After reading the letter, Hastings started to compare Norton's dying wound on his head as the Mark of Cain. The case of X was fully closed, as the legendary story of Hercule Poirot ends once and for all. 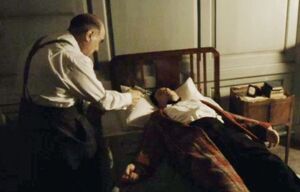 Retrieved from "https://villains.fandom.com/wiki/Stephen_Norton?oldid=3892016"
Community content is available under CC-BY-SA unless otherwise noted.