Working as a terrorist.

Serving his country as a patriot (formerly).

Get revenge on Jack Bauer for leaving him behind enemy lines (failed).

Release the Cordilla virus into the U.S.A. (failed).
Force the President to enact his demands (briefly succeeded, but later failed).
Release the virus into the Chandler Plaza Hotel (succeeded).
Kill Victor Drazen (before Day 1, failed).

Stephen E. Saunders is the main antagonist in the third season of 24.

He threatens the United States with a highly lethal biological weapon, Cordilla virus, as he was abandoned in the enemy lines when working with the Delta Force team while on loan from MI-6.

He was portrayed by Paul Blackthorne, who also played the Nazi version of Quentin Lance in Crisis on Earth-X and Gideon Hask in Star Wars Battlefront II.

Stephen E. Saunders was born in August 3, 1963 and he was a former member in the British Armed Forces, holding the rank of 2nd Major in the Army. Then, he served in the British Tactical Emergency Response Team, European Battle Enforcement and United Legion Technical Team before joining the Secret Intelligence Service as an agent under its field operations division. According to Jack Bauer, Saunders was described as a patriot and a good soldier before stating that something happened to him.

He was originally part of Jack Bauer's six-man Delta Force team when MI-6 loaned him to the United States for a secret mission in Kosovo to kill a Balkan war criminal named Victor Drazen. The mission, code-name Nightfall, was sanctioned and authorized by then-Senator David Palmer. During the mission, he was supposedly killed in the destruction of the Drazen compound. In reality, he survived from the blast, but was abandoned and captured by the Bosnian secret police, torturing Saunders for nearly six years before he was finally released.

After the failed mission, he lived a quiet life in England. Four years prior to Day 3, Saunders contacted his daughter Jane. His wife died six months prior to the time he contacted Jane. However, the abandonment by the Delta Force team caused Saunders to be very resentful towards America, including Bauer.

While the world was still unaware of his survival, Saunders did business covertly with two men shown in the images as Bauer later described to Jane how dangerous her father was, namely Jakarta-based biologist Ari Consul and Middle Eastern arms dealer Sayid Kolobe.

Saunders was also in a relationship with Diana White, who owned Chinatown Go parlor in Los Angeles and ran a high-class escort service in the late 1980s, serving diplomats, embassy employees, foreign dignitaries, heads of state, and at least one high-ranking member of the Vatican. It was likely that he had blackmailed Diana's clients to give him some of the money to finance his operation.

In order to obtain his act of revenge, Saunders planned to hold the entire U.S. mainland hostage by threatening to kill millions of people with a type-3 pulmonary-immuno biological weapon, Cordilla virus. He acquired the virus from his associate, Michael Amador, the intermediary of rogue Ukrainian scientists whom Jack masterminded an unsuccessful attempt in Mexico to intercept the virus and prevent him from doing any such thing. The Counter Terrorist Unit tried to track Amador, but Saunders suspected this, so he blew up Amador and one of his own men, Dorman, with a bomb implanted in a briefcase that was supposedly filled with Amador's money and passport that helped him to leave the country.

Saunders had an associate, Marcus Frederick Alvers, release the first vial of the virus in the Chandler Plaza Hotel, killing over 700 people, and threatened President Palmer that he would release more unless he did what he told him. First, he told him to say "the sky is falling" at a press conference. When Ryan Chappelle began to run money traces, Saunders saw it necessary to eliminate him, so his next demand for Palmer was to kill him. Chase Edmunds ran an unsuccessful attempt to capture Saunders, who had also expected this, and Jack was forced to kill Chappelle.

Palmer did not give in to any more of Saunders' demands, however, it was discovered that he had a daughter, Jane. Jack talked to Saunders on the phone and threatened to hurt Jane, while CTU began tracking the exact location of Saunders' hideout. However, Saunders' men had taken Michelle Dessler hostage, and forced Tony Almeida to help him escape from the TAC teams.

Saunders got Tony to trade Jane for Michelle, but she ran, not wanting to go with her father's men, and Tony, along with Chase and the TAC teams, engaged Saunders' men in a firefight while Jack went after Saunders. Saunders attempted to escape in a helicopter, but a flight of two Marine Corps F/A-18 Hornets destroyed it and Saunders was captured. Saunders refused to surrender the locations of his couriers, until Jack threatened to send Jane into the hotel where the first vial of the virus was released.

The last vial of the virus was in possession of Arthur Rabens, whom CTU told Saunders to identify in several photos of people in the L.A. Metro Rail subway. While Saunders looked through the pictures to find Rabens, Teresa, the wife of Gael Ortega, who was the first victim in the hotel infected by the virus, took a weapon and shot Saunders twice in the chest at close range as payback for her husband's death and she was arrested by CTU security detail as a result. 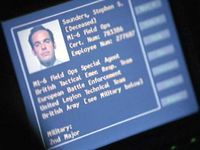 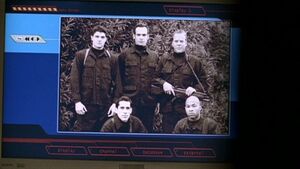 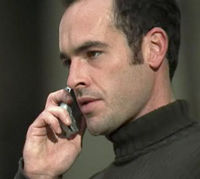 Saunders tells the President to enact his demands

Saunders attempts to identify the last courier at CTU before being killed.