Second Wife (from her husband's point of view)

Mother (from Marlene's point of view)

Kill her stepson and to ensure that her own daughter lives a happy life (succeeded initially but failed eventually).

Get rid of the "raging fires that were burning her insides" (failed).

The Stepmother is the main antagonist in the German fairytale The Juniper Tree, written by the Grimm Brothers. The fairytale has been considered to be one of the darkest fairytales written for children due to its graphic and mature content.

Once upon a time, there lived a wealthy and pious couple who lived humbly in their mansion near the edge of the forest. However, they had no children and prayed day and night for God to grant them one.

One winter, the wife walked into the snowy courtyard outside and stood underneath a beautiful juniper tree. While standing underneath the tree, she peeled some apples and as she peeled them, the wife accidentally cut her finger on the knife and drops of blood fell onto the snow.

Sighing to herself, the wife wished for a child to have skin as white as snow and cheeks and lips as red as blood. As six months passed by, the trees in the forest grew, the flowers bloomed, the birds began to sing again and the fruits became ripe once again. On the seventh month, the wife couldn't resist her appetite for the juniper berries that grew on the juniper tree and it was so tempting that she collected all of the berries and ate them all greedily.

Soon after, the wife became ill and on the next month, she laid on her bed and said to her husband that if she ever died, she will have to be buried under the juniper tree in the courtyard. The husband kept his promise and his wife soon gave birth to a baby boy with skin as white as snow and cheeks and lips as red as blood the next month. The wife grew so happy when she first saw her son that she died.

Despite his wish of having a child being fulfilled, the husband couldn't bear with the sudden death of his wife so he decided to keep his wife's dying wish by burying her under the juniper tree. Time soon healed his wounds as he found himself another woman who already had a daughter of her own named Marlene (in some versions Marleen or Marlinchen). After their marriage, his second wife became jealous of her stepson as she knew that he will be one to inherit all the family's wealth and she wishes that this will happen to her own daughter instead. The stepmother would abuse and beat her stepson every day after he came home from school and even though he cried in his sleep every night, she was never satisfied. One day, the stepmother thought of an evil scheme to get rid of her dreaded stepson for good.

As he walked closer to the chest, the stepmother held the lid up high and grinned as she watched her evil scheme unfold. While he bent down to grab an apple, the stepmother shut the lid down onto the boy's neck, which instantly decapitated him. Blood soaked the apples as his head rolled into the chest. At last, her evil scheme succeeded but she also had to think of a way to dispose his body without anyone knowing. Grabbing a bandage from the drawers, she retrieved the head of her stepson from the chest and bound his head to the rest of his body with the bandage and placed an apple onto his lap afterwards.

The stepmother then called Marlene to ask her stepbrother for the apple and to box him in the ear if he didn't respond. Agreeing to her ignorantly, Marlene asked him several times for the apple but as soon as she boxed him the ear, his head fell off and rolled onto the floor. Screaming at what she had witnessed, the stepmother showed crocodile tears and promised her that they will not tell this to anyone- not even the father of the stepson. The stepmother then dragged the boy's body into the kitchen and chopped him into pieces and made him into a stew.

As dawn approached, the father arrived home hungry and he asked his second wife what they were going to have for dinner and she delightfully responded to him that they were going to have stew. The father devoured the entire stew in a few minutes, with little knowledge that he was eating his own son. Throughout the whole dinner, Marlene cried and cried and kept the bones of her stepbrother and wrapped them up with a handkerchief. After that, she buried the handkerchief under the juniper tree in the courtyard and cried the entire night.

The next morning, a beautiful bird emerged from the juniper tree and it flew to a nearby town, where it sung about its horrible fate of being killed by its mother, eaten by its father and buried by its sister. The beautiful melody of the bird caught the attention of a goldsmith, shoemaker and miller and in return, they gave the bird a gold chain, a pair of red shoes and a millstone respectively. Afterwards, the bird flew back to the juniper tree and sung the same melody once again to Marlene and the father, who came outside with fascination. The bird gave the father its gold chain and Marlene its pair of red shoes. They both go back into the house delighted with their gifts.

Eventually, it is revealed that the stepmother has been complaining about the "raging fires that were burning her insides" the whole time, which has led to her insanity ever since her marriage with the stepson's father. Hoping for relief, the stepmother walks outside of the mansion and she sees the bird flying around with a millstone around its neck. After the bird finishes singing the same melody for the final time, it releases the millstone from its neck and drops it on top of the stepmother's head, crushing her to death in a gruesome manner which causes a loud crash in the process.

The father and Marlene rush outside to investigate the source of the loud crash but all they see are flames and smoke erupting and rising out from the millstone. As the flames and smoke clear away, they see their beloved stepson standing in the middle of the millstone and he later tells them he was the bird who gave them the gifts the whole time. To celebrate their family reunion, they have an elaborate lunch together in their mansion and soon after that, they lived happily ever after. 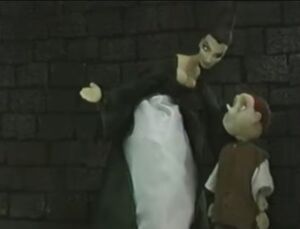 The Stepmother showing the Stepson the chest of apples. 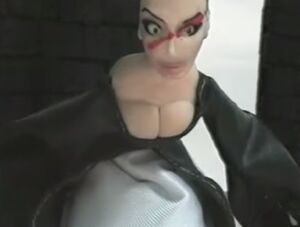 The Stepmother killing the Stepson. 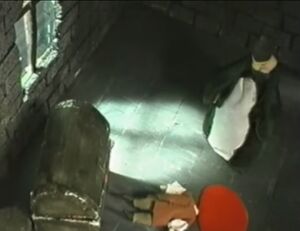 The decpatitated body of the Stepson lying on the floor as the wicked Stepmother stands with delight. 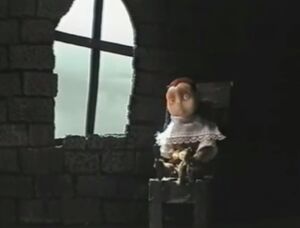 The Stepson's head bound to the rest of his body with a bandage and is placed on a chair.
Add a photo to this gallery 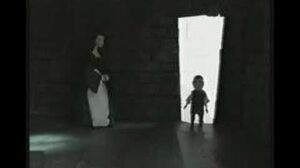 The Juniper Tree
The infamous sequence when the Stepmother brutally murders her Stepson.
Add a photo to this gallery

Retrieved from "https://villains.fandom.com/wiki/Stepmother_(The_Juniper_Tree)?oldid=3915461"
Community content is available under CC-BY-SA unless otherwise noted.