NOTE: This article is about the incarnation of Steppenwolf from the DC Extended Universe. The mainstream version can be found here: Steppenwolf.

Taking over planets with Mother Boxes in Darkseid's name.

Take back Earth's Mother Boxes and use them to terraform the planet.

Steppenwolf is the main antagonist of the 2017 superhero film Justice League. He is an Apokoliptian military official and Darkseid's uncle who seeks to obtain the three Mother Boxes on Earth for his nephew. He also serves as his nephew's second-in-command, but he also secretly desires to break free from his nephew's control. He is based on Steppenwolf from the original comics.

He was voiced by Ciarán Hinds in motion capture, who also played Mance Rayder in Game of Thrones, Mephisto in Ghost Rider: Spirit of Vengeance, Henry Burke in Race to Witch Mountain, Botticelli Remorso in The Tale of Despereaux, Jonathan Reiss in Lara Croft: Tomb Raider – The Cradle of Life and Bill Maplewood in Life During Wartime.

Steppenwolf was born several millennia ago on the hellish planet of Apokolips. At some point, Steppenwolf became the herald of his nephew and master Darkseid, and would take over planets in his name, prevailing in every attempt. Eventually, after countless years of conquering and serving under Darkseid, Steppenwolf desired to free himself from his eternal servitude, although he was neither powerful nor foolish enough to try and oppose his master, and continued bitterly serving him.

5,000 years prior to the events of the film, Steppenwolf and his forces attacked Earth, intending to use the three Mother Boxes to terraform the planet into one similar to that of Apokolips. However, Steppenwolf was unprepared about the planet's resistance, consisting of the united armies of Humans, Amazons and Atlantis, as well as the Olympian Gods and even beings from other planets (namely two Green Lanterns sent by the Guardians). Despite being ill-equipped and totally lack of weaponry, Steppenwolf and his forces managed to inflict heavy casualties for the Earth force with nothing but brute strength and bare hands.

However, the resistance eventually overcame Steppenwolf's army and Zeus defeated Steppenwolf himself, forcing the latter to reluctantly return to Apokolips in humiliation, while the Amazons, Atlantians and Humans hid the three Mother Boxes away so that they could never be used by anyone. After he returned to his homeworld, due to his enormous track records in conquering planets, Steppenwolf was exiled for his failure by Darkseid instead of execution, and he swore to conquer the world to restore his glory.

Communion with Luthor and Second Invasion of Earth

In 2016, when Lex Luthor broke into Scout Ship 0344 (intending to use its Genesis Chamber to turn the body of General Zod into a Kryptonian abomination), he accessed the ship's database and made contact with Steppenwolf. Steppenwolf taught Luthor about the Mother Boxes, however, Lex was interrupted, breaking their contact.

A year later, after Superman's death at the hands of Doomsday, Steppenwolf and his Parademons become aware of humanity's fear and decide to launch a second invasion in order to reclaim to the Mother Boxes. The Mother Box hidden away on Themyscira first becomes active and summons Steppenwolf and the Parademons to Earth, where they and the Amazons engage in a lengthy battle over the Mother Box. In the end, Steppenwolf defeats Hippolyta and uses the Mother Box to teleport himself away as the entire Amazon army converges on him. Due to Steppenwolf's return, Hippolyta and the other Amazons light the Ancient Warning Fire, alerting Diana Prince/Wonder Woman to the invasion and getting her to speed up Batman's plan of forming a team to confront the army. Soon afterwards, Steppenwolf transforms a remote, scarcely populated area of Russia into a base, and sends his Parademons to seek the remaining Boxes. Next, Steppenwolf and his forces attack Atlantis, managing to take the second Mother Box after a brief battle with Arthur Curry/Aquaman.

In order to find the final Mother Box, Steppenwolf and his minions kidnap numerous S.T.A.R. Labs scientists, trapping them in an abandoned facility, and attempts to force them to tell him its location by torturing and killing them off one-by-one. However, the Justice League discovers Steppenwolf's lair, freeing the hostages and engaging him and his forces in battle. Steppenwolf primarily faces Wonder Woman, whom he taunts for wearing the symbols of the deceased Old Gods. In the end, Steppenwolf uses a missile from the Batmobile to blow open a hole and flood the facility, escaping with the Mother Box and leaving the Justice League to drown, although Aquaman arrives and rescues the team.

Back at the Batcave, Cyborg retrieves the last Mother Box from S.T.A.R. Labs, and, learning about the Box's power to create life, Batman forms a plan to use the Box to revive Superman, to both fight off Steppenwolf and his forces and restore hope to humanity, creating a secret contingency plan in case things go awry. Although the plan succeeds, Superman is left with few memories of who he was and mistakenly begins fighting with the League (forcing Batman to activate his contingency plan of Lois Lane), and, with the heroes distracted, Steppenwolf teleports into the Kryptonian Genesis Chamber and steals the last Mother Box.

With the three Mother Boxes at hand, Steppenwolf returns to Russia and prepares to combine the Boxes, while the Justice League converges on his location, although Steppenwolf arrogantly decides to let them come. As the Justice League arrives, Steppenwolf engages Wonder Woman, and later Aquaman and Cyborg, however, even with their powers combined, Steppenwolf overpowers them all with relative ease, badly damaging Cyborg and telling them there is no hope. Before this can go on any further, Superman (having regained his memories) arrives and begins easily fighting off Steppenwolf before leaving to help Flash save the Russian civilians, giving the League the edge they needed over the army. Soon enough, the League overcomes Steppenwolf, deconstructing the Mother Boxes and destroying his electro-axe. Because of this, in an ironic twist of fate, Steppenwolf begins to feel fear, rousing the appetites of his Parademons and turning them against him. Despite his fear, Steppenwolf tries to fight back, but is overwhelmed by the angry Parademons. Steppenwolf is last seen being ravaged by his army as the Mother Box teleports him away, leaving only his helmet behind. It is completely unknown if Steppenwolf survived or was devoured by the Parademons.

Like his nephew, Steppenwolf was a murderous, malicious and dangerous being who just finds humans primitive and helpless. In spite of appearing vaguely throughout the movie, he is extremely hated by both heroes and villains. In a flashback, Ares fought him with other gods in spite of himself being arrogant, proving Steppenwolf is more arrogant and lethal. He is remorseless and cruel, showing signs of unspeakable depravity. Ciarán Hinds however seems to portray Steppenwolf in a sympathetic light and that he is more of a tragic villain than a complete barbaric monster by stating that he's "old, tired and still trying to get out of his own enslavement to Darkseid". Despite this, there is no evidence that paints him in such a manner. He is nothing more than a hateful sadist who would do anything to serve his master at any cost without showing any true loyalty to anyone. 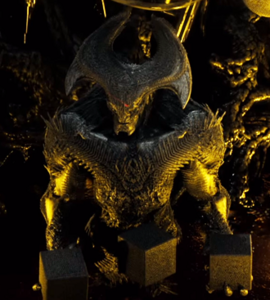 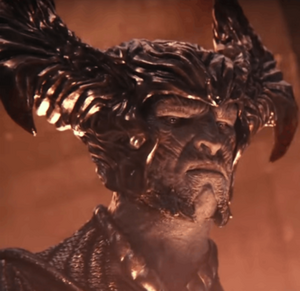 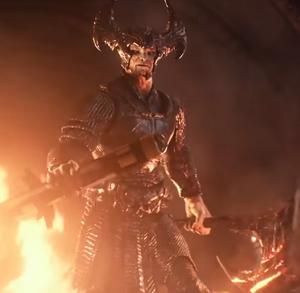 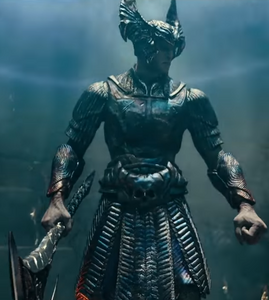 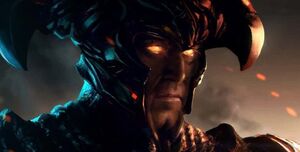 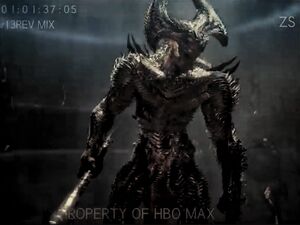 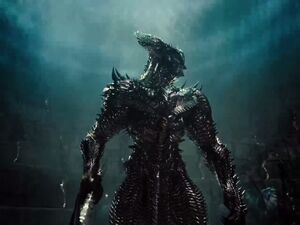 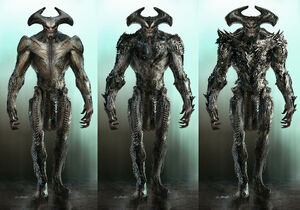 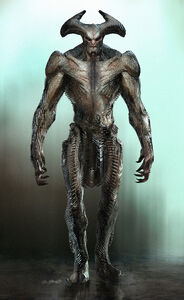 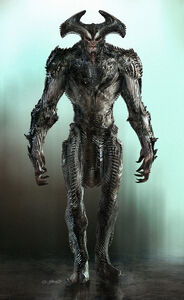 Concept art of Steppenwolf with armor. 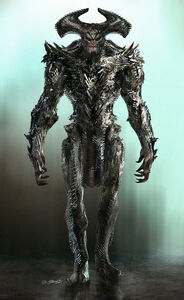 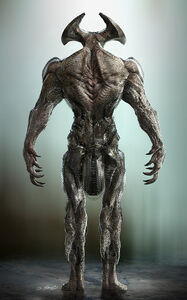 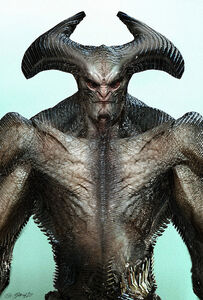 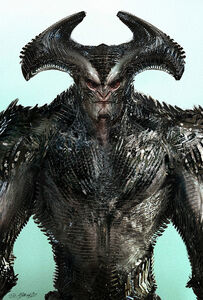 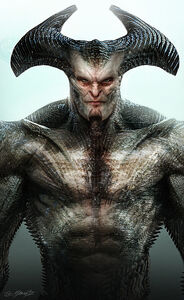 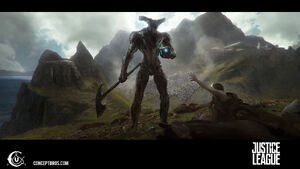 Steppenwolf acquiring one of the Mother Boxes from the Amazons. 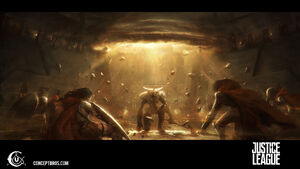 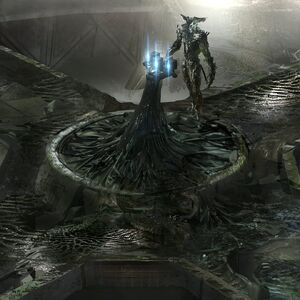 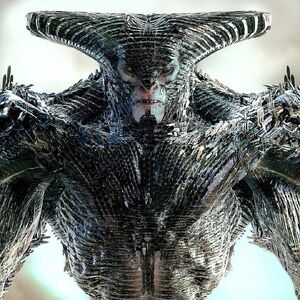 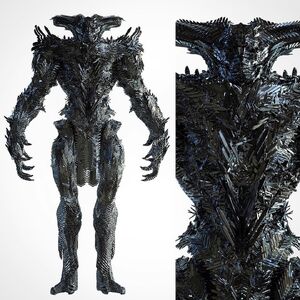 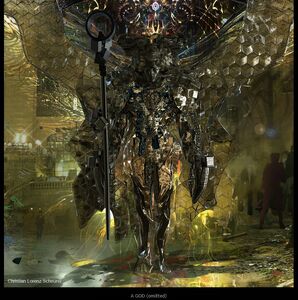 Concept art of Steppenwolf's appearance for Suicide Squad.
Add a photo to this gallery

Retrieved from "https://villains.fandom.com/wiki/Steppenwolf_(DC_Extended_Universe)?oldid=3985819"
Community content is available under CC-BY-SA unless otherwise noted.