To live his own life.

Steve-arino is a clone of Steve Smith. He was the main antagonist of the episode "Son of Stan" of the cartoon TV show American Dad!.

He was voiced by Scott Grimes, who also voices the original Steve.

He was an experiment to see what would happen if Steve was raised purely by Stan's parenting methods. While he was initially identical to Steve in every single way and becoming a model son in Stan's eyes, including being greatly athletic and intelligent, Stan's overly strict parenting caused Steve-arino to become resentful and churlish of Stan and his lack of freedom. These repressed feelings caused Steve-arino to become a sociopath who killed and ate cats.

He then used what he learned from Stan to fake his running away, kidnap Steve, and assume his identity. Eventually, Steve-arino was found out and decided to kill Steve to cement his status as Stan and Francine's only son. Stan and Francine, desperate to find and save their real son, followed Steve-arino to an abandoned warehouse, where Steve had been stashed, along with many stray cats whom Steve-arino had obviously intended to torment and even kill at some point.

Stan tried to reason with Steve-arino, telling him that if he let Steve go, he would let him do whatever he wanted. Steve-arino seemed to calm down and return to being a good, normal boy again, but then, he told Stan that what he still wanted to do was kill Steve, to which Stan agreed briefly until Francine reminded him that that was what they didn't want.

From there, a battle began as Stan fought Steve-arino. But it was brief, as Steve-arino easily, handily defeated Stan. To help her husband, Francine opened the cages of the cats, who jumped onto Steve-arino and made him stumble backwards until he fell out of a window. Thinking he was dead from the fall, Stan and Francine rescued Steve and began to leave the warehouse. However, they were all suddenly attacked by the evil clone. Steve-arino chased Steve around a propane tank with a shard of glass that he intended on using to stab him, but Stan shot the tank, and the resulting explosion sent Steve-arino flying into a brick wall.

Stan, Francine, and Steve, thinking that Steve-arino was truly dead, finally left the scene to return home. But after they departed, the barely-alive clone saw a gun that he then wanted to use on Steve, but he also saw one of the cats who had been freed and survived the fall. The two, determined to kill each other, tried to beat each other to the gun. The cat eventually grabbed it first and pointed it at Steve-arino, glaring at the clone as he did so. The evil clone's last words were "I'll see you in hell." A shot was then fired, presumably the cat shooting Steve-arino dead. 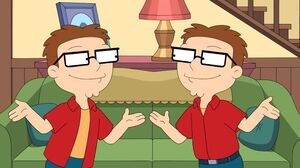 Steve Smith and his clone Steve-arino are also speaking their own made-up language. 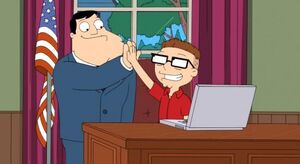