My Date with the President's Daughter

To be Hallie Richmond's boyfriend (failed).

Steve Ellinger is the main antagonist and the bully of Duncan Fletcher in the 1998 live action film, My Date with the President's Daughter. He has obsessive love with Hallie Richmond.

He was portrayed by Grant Nickalls.

Steve was first seen at the beginning of the movie, at a music store in a mall, where he bumped into Duncan.

Later, after Duncan and Hallie ditched the secret service, they went to get some clothes. After they leave, Hallie noticed Steve riding on his motorcycle, where they both fall in love in sight.

At Club Alien, while Duncan was making a phone call to his friends, Hallie ran into Steve, where the two of them started to dance with each other. As soon as Duncan arrived, Steve threatened him to find his own date. Duncan told Steve that Hallie is his date and left with her.

Steve was seen later, as soon as after Hallie had a fight with Duncan, where after Duncan left, he tried to woo her and stated that Duncan did not deserve a girl like her (even calling him little boy). He then offers to take her to a party that he and his roommates are having at his house, which she accepts.

At Steve's house, Steve and Hallie dance, at the point where Steve tries to make out with her, which she tells him to stop because it's a little too far and he stops and continues dancing with her but tries to make out with her again, which makes her tell him to stop and to take her home but he tells her that he'll take her home later when he's ready so she tells him that she'll walk home and tries to leave. He follows her outside and grabs her by the arm, trying to force her to come back inside as Duncan rides up on a scooter and fights Steve and Hallie tries to help Duncan by jumping on Steve and telling Steve to leave Duncan alone in which Steve hits her to the ground and tells her to stay out of the fight when Duncan finally punches Steve across the face, knocking him out on the ground and Hallie pushes Steve's motorcycle into a bunch of trash cans. destroying it and then she flips him a bird calling him a loser and leaves with Duncan to which Duncan replies sarcastically: "CATCH YA LATER STEVEARENO!".

Steve is very rude, obnoxious, and argumentative to a lot of people at his school, mostly at Duncan. However, it was shown that he has a soft spot for girls as he first met Hallie. Whenever a girl dumps him, Steve forbids that person from leaving, showing that he has a strong interest over Hallie.

After she and Duncan bought new clothes at the store, f/x, and leaves from it, Steve falls in awestruck as he sees her while riding his motorcycle. Hallie also started to have feelings for Steve after she saw him. At Club Alien, while Duncan is making a phone call, Hallie runs into Steve there, where the two started to dance. As Duncan arrives, Steve tells him to find his own date. Hallie promises Duncan to dance with after she has done dancing with Steve. But Duncan reveals to her the Rednecks they came across earlier. Later on, after dumping Duncan for believing that he's not in love with her, Hallie walks away, where Steve appears besides her in his motorcycle. After knowing what happened to her, Steve tells Hallie that she deserves a man as himself, and offers her the chance to party with him at his house. Hallie wasn't sure at first, but soon as Duncan appears, Hallie gladly accepts. As Duncan sees her riding with Steve, he warns her not to hang out with him. But Hallie ignores him and drives away with Steve. However, Hallie wasn't excited as she came to Steve's place, as everyone was partying wildly. As soon as Hallie dances with Steve, he tries to kiss her, making Hallie dump him. Steve goes after Hallie, threatening her from leaving. Luckily, Duncan saves Hallie from him, who now wants to be with Duncan again. Throughout her date, she was seen wearing a sexy pink velvet mini dress with spaghetti straps, a pink butterfly necklace and a pair of black high heel sandals with no pantyhose. She is the lead female and the Damsel in Distress in the film. 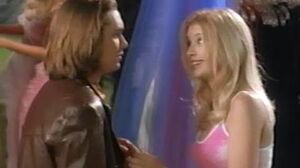 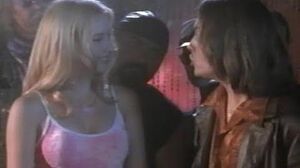 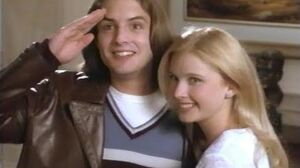 Retrieved from "https://villains.fandom.com/wiki/Steve_Ellinger?oldid=4215460"
Community content is available under CC-BY-SA unless otherwise noted.