Host of The Underbelly of Paradise

Coercing his assets into eliminating any evidence that incriminates his corruption.

Get revenge on Andreas Sanchez for betraying him (succeeded).
Sabotage the IAA, increase his power and career (temporarily succeeded).
Have Michael and Dave arrested to prevent his own arrest (failed).
Have Trevor Philips killed (succeeded in ending A, but failed in ending B and C).

He is a highly decorated yet infamously corrupt federal agent of the FIB who serves as the superior of fellow agents Dave Norton and Andreas Sanchez.

Specifically, Haines served as one of the main antagonists of Trevor Philips' storyline and the secondary antagonist of Michael De Santa and Franklin Clinton's storylines.

He was voiced by Robert Bogue.

Steve Haines was born in 1975 and joined the FIB while being 18, in 1993. In the following years, he became a highly decorated and high-ranked FIB special agent and was given leadership of his own FIB special unit and became the boss of several well-known FIB special agents, including Andreas Sanchez and Dave Norton. In 2008, Haines became the host of a new criminal reality TV show called The Underbelly of Paradise. As host of the show, Haines regularly makes reports on gang activity and the overall criminal underworld of Los Santos which is divided between rival criminal gangs. Haines would later become a celebrity, thanks to the success of the program.

However, despite the decorations from the Bureau, leading his own unit and becoming famous as the host of a show, by 2013, Haines and Sanchez were infamously corrupt. Haines, in particular, was known to be on the payroll of several wealthy and powerful people, including eccentric billionaire Devin Weston, whom Haines considers a "close friend", although later events show that they aren't that friendly.

Haines proceeds to use Michael De Santa, Franklin Clinton and Trevor Philips for numerous jobs in an attempt to further his career and position of power, all unbeknownst to and unsanctioned by his agency. One mission he recruits the gang for includes having Trevor brutally torture a seemingly innocent man just for the sake of doing so, as the man was willing to divulge information about Haines' target from the start of the interrogation, before ordering Trevor to murder the man simply for "outliving his usefulness" (Trevor however does not carry out the order, unbeknownst to Haines).

After Haines uses Michael and his gang several times in exploits against his rivals in the I.A.A., suspicion is cast on him by the I.A.A., as well as his own agency. Later he and Norton was later contact by Franklin informing them to get to Trevor's lab at Sandy Shores and he and Michael can't go to Los Santos due to them being banned from entering there by Martin Madrazo, (until Lester Crest lift it in exchange to return his wife Patricia whom he mistreated which was the reason of the ban) and they give them instructions for the Paleto heist so they can infiltrate the Humanes Lab and Research to steal a chemical. As a result of the pressure and investigation into him, he attempts to get rid of loose ends by betraying Michael and have him arrested in a sting operation. However, the sting was actually a trap for Haines himself, and after a tense standoff, a shootout ensues between several different agency and mercenary groups there for either Haines or Michael. Haines is wounded but manages to escape the chaos only after murdering his partner Sanchez, who seemingly informed on him to his superiors because of Haines' illegal activities.

Haines later resurfaces after the investigation into him goes away due to a lack of evidence and witnesses. He approaches Michael and Trevor's partner, Franklin, ordering him to murder Trevor out of fear that the crime lord's actions would bring further heat and attention to Haines, as Dave Norton was able to convince him that Michael could at least be controlled and kept quiet. However, Weston arrives to Franklin's home and orders him to kill Michael instead, viewing Michael's refusal to cooperate with him as a threat to his businesses. Franklin is then forced by the two villains to make a life and death decision between his two friends or fighting the odds and going after Haines and Weston.

In the end, if Franklin decides to go against Haines and Weston, he calls Michael and Trevor who then set a trap for both Haines and Weston's men who are all killed by the trio or by each other in a massive shootout. The three men then decide to act against their foes quickly to catch them off guard while they think they have won. The three of them then have a loose ends list comprising of Haines, Weston, Triad leader Wei Cheng, and Families OG-turned-Ballas member Harold "Stretch" Joseph. Trevor decides to track down and kill Haines because of his extreme distaste for him and the things he has had him do under his orders. With the help of the crew's operation planner and expert hacker, Lester Crest, Trevor is able to track Haines down to an amusement park on the park's Ferris wheel, where he is in the process of filming an episode for his television show. Trevor keeps his distance so as not to alert his target, unloads his sniper rifle, and shoots Haines directly in the head in front of his own cameraman, killing the corrupt agent instantly.

Trevor can also use an RPG by shooting it at where Haines and his cameraman are sitting, violently killing them both in the resulting explosion.

Alternatively, if the player, as Franklin, decides to kill either Michael or Trevor, his final fate is not shown and it is assumed he survives the events of the game. If the player chooses to kill Trevor, Franklin calls Haines and informs him that he has done as requested. Franklin also asks Haines to persuade Weston not to go after him for sparing Michael. Haines tells Franklin that he will handle Weston, who is in a precarious position because Merryweather has lost its license to operate in the country, but also tells him never to contact him again. If Franklin kills Michael instead, Weston will speak with Haines' superiors and get him to back off.

It is confirmed that Option C is the canon choice, meaning that Haines's death is canon.

As stated above, Haines is a corrupt FIB agent, who does not hesitate when it comes to breaking the law and Bureau procedure and policy if there is an opportunity to further advance his career. Haines first appears to be pleasant and charming on his TV show, but when Michael meets him in person, he is shown to be selfish, callous, arrogant, and overconfident in dialogue, thinking solely about his career and going as far as curiously asking Michael if he has ever heard of him or his show and sounding highly displeased at the end when Michael makes it clear he does not care who Haines is. His true colors are shown, however, when Michael begins to jokingly mock Haines and his partners over their rogue activities. Haines plays along and even compliments Michael on his quick wit at first; however, his temperament quickly changes when he grabs Michael by the throat and threatens to strangle him to death if he continues to disrespect him, thus showing that Haines is, in reality, an intimidating and egotistical sociopath who has little respect or tolerance for others, only looking to achieve his own goals and whose entire motivation revolves around how he can better his career and image. He has a sadistic sense of humor and easily loses his temper - almost choking Michael to death for making a few wisecracking jokes at his expense, which also extends to his own attempts at wisecracks. However, due to his snide and arrogant personality, most of them fall flat. Despite these traits, Dave Norton tries to assure Michael that they are not that different and that Haines and Dave are less corrupt than some divisions in the FIB, but over time it is shown that even Dave has so much control over Haines, like the rest of the protagonists.

Haines is shown to be despised by almost everyone he comes into contact with (most noticeably by Michael and Trevor, who both share a deep hatred towards Haines). Despite this, he claims a personal friendship with Devin Weston (it is implied that it was Weston's influence that brought Haines to his current position in the FIB), although Weston himself treats him as a "clown", and Haines himself can threaten Weston if he needs to, as proven in Ending A.

Haines has no qualms with torturing and/or killing suspects or people he sees as standing in the way of his career. This is shown when he has Trevor Phillips brutally torture a seemingly innocent man for information on another possible terror suspect, before casually ordering Trevor to murder the man when he is of no further use to Haines. Also, the man was more than willing to reveal the information to Haines, who preferred to torture the man first and after finishing with the torture session, Haines happily left to play racquetball. This implies that Haines is a sadist and truly enjoys the suffering of others.

Haines is an opportunistic person who uses Michael De Santa, Franklin Clinton and Trevor Philips to do his dirty work and ends up betraying them when not having any further use of them, and is also willing to sacrifice others to save his own skin, which is evident when he attempts to have Dave Norton and Michael arrested to deflect blame for all the criminal activities they participated in. Haines claims several times that he is a patriot and would do anything for his country, but when planning to raid the IAA compound and steal an experimental neurotoxin that was going to be released by the IAA in a metropolitan area in order to receive funds from the government, Haines is shown not willing to get his hands dirty and preferring to stay behind and leaving the protagonists to do the job themselves, implying Haines' spineless nature and confirming it in The Third Way; when Trevor shoots the cameraman and runs over to Haines, the crooked agent will be in a crouching position with his hands over his head.

In the end, Steve Haines is a cowardly and irredeemable official who will betray and threaten everyone if he needs to. 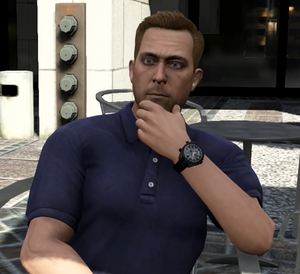 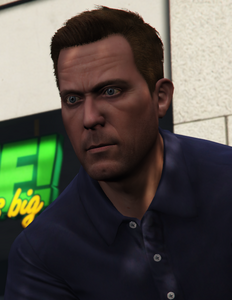 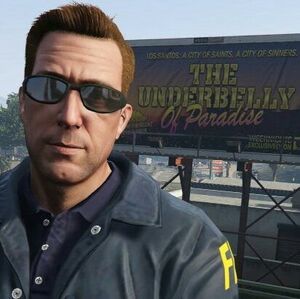 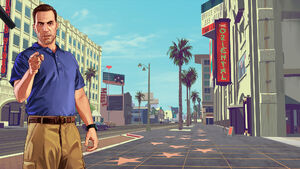 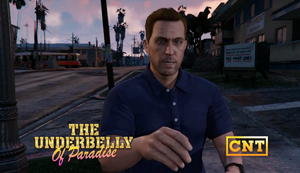 Haines in his show "The Underbelly of Paradise". 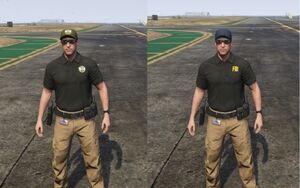 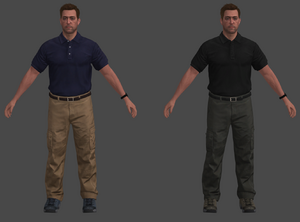