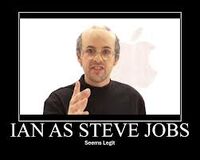 Steve Jobs is a character in the Smosh videos, IPHONE 5 REVEALED and IPHONE 6 REVEALED. He is shown as a dimwitted and arrogant CEO of Apple who announces new iPhone models with stupid and pointless features

He was portrayed by Ian Hecox.

After hearing about how much people believe that the iPhone 4S is so amazing, nothing could make it better, Steve Jobs decides to travel into the afterlife to create the best iPhone ever, the iPhone 5.

Wes Alderson (Anthony Padilla) explains for Steve that the iPhone 5 fixed the problems with auto-correct typing by making sure if the texter meantt to type each word, but it came out pathetic as SIRI was asking a phone user things like "Did you mean to type 'your' or did you mean to type 'beaver'?"  Wes also explained that the iPhone power cord is now smaller explaining how bulky the other one was.  However, the power cord was to small, that a guy was struggling trying to put the cord in the phone with a microscope.

Hailey Matthews also explains for Steve that the vibrate mode is even stronger, so no one will miss a call as it vibrates, giving it a 1.5 from the richter scale on its highest setting.  But the vibration could also break glass in its highest setting as well.  Matthews also explains that people wanted brighter LED lights for photos, so she says that they filled the entire back of the phone with LED's for much brighter photos.  But when a guy is taking a picture of his son, Billy Hamburger (Ian Hecox) for his birthday, the flash is too bright for Billy to handle.  Matthews thinks that duel LED's would've been enough but was about to say it was Steve's idea to put full LED's, but then got shot by Steve Jobs.

After shooting Hailey, Steve Jobs tells about how wrong vertical recorded iPhone videos looked, but recording with the iPhone 5 won't be very pleasant as a guy's iPhone set on fire burning his hand while recording his son, Billy, on his birthday.  Steve then dresses up as Hailey to tell that the iPhone 5 will give people reminders to them at the appropriate time so it won't interupt conversations.  Wes then talks about how human like SIRI now is, like telling racist jokes.  He also gives people the option to change SIRI into the most soulful voice ever, which is Morgan Freeman.

Steve Jobs appears as a hologram created by Apple to introduce the iPhone 6.  He also thinks that the current Apple CEO, Tim Cook (who he always gets his name wrong), sucks and will never be as good as him.  He then tells that thew iPhone 6 has exciting new upgrades and features, like being shatterproof and waterproof, which it really isn't when a hipster named Kevin (Anthony Padilla) was testing it.  He also talks about its improved speed, which he says is way faster than older models, but it's still the same.  The iPhone 6 also no longer has the back camera and now has an improved front camera, since people now take selfies instead of actual photos.  Steve adds that since Apple joined the selfie trend, the iPhone 6 is already in camera mode when picked up.  Steve also explains that the iPhone 6 is lighter, but Kevin mistook it for a cigarette lighter.  Because of this, Steve blames "Tom Crook", then an employee tells him his names Tim Cook.  Steve ignores the interuption and shows people the3 size of the iPhone 6 screen, but he mistakenly pulls out an iPhone 5S, and iPad mini, an Apple TV remote, an old-fashioned telephone, a Pop-Tart, and even a Samsung Galaxy S 3 which he's been using for a few months.  He then moves on to talk about the new apps for the iPhone 6.  The apps include a fitness that points out the fat and ugly spots in people's faces that need improvement, and also shocks people who try to sneak in food so it can track people's calories and reach their weight-loss goals, which Kevin found easier than self control.  Steve also says that any Samsung Galaxy phones that are never an iPhone 6 no more than 50 feet will burst into flames, and might burn other people as well.  Steve Jobs concludes that the iPhone 6 is "not very different and a total waste of money", and blames "Tom Cook" again. The same annoyed Apple employee corrects him again, but then Steve shoots him with an arrow gun.  He then asks if holograms can be charged for murder, then he decides to run away just in case.

Retrieved from "https://villains.fandom.com/wiki/Steve_Jobs_(Smosh)?oldid=3508623"
Community content is available under CC-BY-SA unless otherwise noted.