The Saga of Darren Shan

Kill Darren Shan and Larten Crepsley to become the Lord of Shadow.

Destroy the world as the Lord of Shadow.

Steve Leopard Leonard is the main antagonist in The Saga of Darren Shan book series and the 2009 fantasy film Cirque Du Freak The Vampire's Assistant. He was Darren Shan's former best friend and the Lord of the Vampaneze.

He is portrayed by Josh Hutcherson.

In Cirque du Freak, Steve was Darren's best friend. This changed, however, when Darren stole Madam Octa the spider who bit Steve. Darren had to become a half-vampire in order to save his friend. Mr. Crepsley, the vampire who changed Darren, had been asked by Steve to turn him into a vampire. He refused to do it, saying that Steve's blood was evil.

The Coffin of Fire is a magical coffin, which will burst into flames when somebody steps into it. Only the person who is true leader of the Vampaneze can survive this. Steve was chosen for this.

Darren and Steve fight to death in their hometown. Darren got the upper hand and stabbed Steve in the chest. It was fatal, but not an immediate kill. Steve lay there, paralyzed with shock, when Desmond Tiny showed up. Mr. Tiny announced that he was the father of the two battling parties. Steve begged Mr. Tiny to take him as a son, since Mr. Tiny chose the winner, Darren, to be at his side. Evanna was present at this time and was as shocked as anyone else. Her brother Mr. Tall, had died earlier that day, and was shocked to find out she had two more brothers. Mr. Tiny disowned Steve at that moment and left him to die. Darren, who did not want to be owned by Mr.Tiny in becoming the Lord of Shadow to destroy the world, let Steve stab him until they both died.

Steve is violent and a bad influence. He is quick to judge and will get into fights easily. He can hold a grudge easily and will go through elaborate plans to get what he wants. 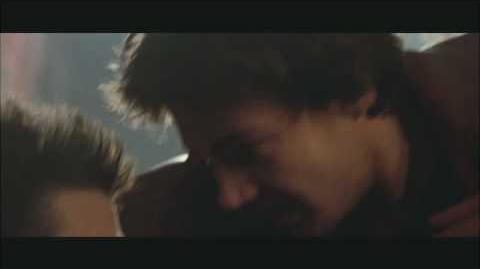 The Vampire's Assistant Exclusive Movie Clip 1
Steve and his archenemy, Darren Shan, fighting in Cirque Du Freak: The Vampire's Assistant
Add a photo to this gallery
Retrieved from "https://villains.fandom.com/wiki/Steve_Leonard?oldid=3462283"
Community content is available under CC-BY-SA unless otherwise noted.