Steven Haley is a minor antagonist in the remake of Halloween.

He was portrayed by Adam Weisman.

Steve Haley is the boyfriend of Judith Myers. He come over on Halloween night to have sex with Judith who was supposed to take her younger brother, Michael trick or treating.When Deborah met Steve and she instantly knew his intentions towards her daughter and told him to be out of the house before eleven.

While making love, Steve bought out a white mask that he wanted to wear during sex in which Judith didn't want to. After they finished, Steve went downstairs to get a sandwich and was unaware that Michael had killed Ronnie White, the boyfriend of Deborah. As he ate, Michael came up behind him and beat him to death with an aluminium baseball bat.

He later went upstairs and took Steve's mask and stabbed his sister to death. The mask that Steve bought would be later used as Michael's main mask in his adult life. 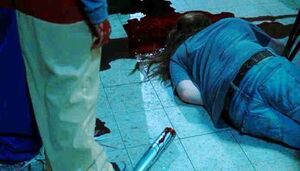