Put the "ALZ-113" drug on the market despite the dangers (succeeded).

Prevent the ape revolution and uprising by killing Caesar (failed).

He was the charismatic and egomaniacal CEO of Gen-Sys laboratories whose plan to put "ALZ-113" drugs on the market ended up causing a global pandemic that all but doomed most of humanity as a result. This consequently extended to the point where Jacobs is not only responsible for mankind's downfall, but also Koba's genocidal hatred for humans - thus indirectly triggering the events of Koba's eventual uprising against Caesar in the process.

He was portrayed by David Oyelowo, who also voiced Agent Kallus in Star Wars: Rebels and Scar in The Lion Guard.

Before becoming CEO, Jacobs had a long history of running projects aimed at studying cognitive ability. At one point, he teamed up with neuroscientist Amol, who sought to create a machine capable of producing images directly from the brain. Jacobs was skeptical of the project's practicality and took an instant dislike of Koba, the bonobo selected for the trial. Amol's experiments proved to be a financial disaster for Jacobs, who proceeded to fire Amol just as the neuroscientist and Koba were begining to have a good relationship. Afterwards, Jacobs confronted Koba in his cage, deriding him as a "stupid, ugly monkey" and telling him that were the choice his, he would put him down himself.

Sometime later, Jacobs' fortunes changed, and he became CEO of Gen-Sys Laboratories, gaining a penchant for callously experimenting on apes to bypass human trials. He also hired Dr. Will Rodman, who was researching a cure to Alzheimer's Disease. Despite this, he already caused one step to both his downfall and mankind's near extinction.

After two years in charge of the lab, one of Will's chimps went berserk and Jacobs shut down research on the 'ALZ-112' drug for a further eight years. It was only when Will revealed he had used the drug on his own father, with limited results, that Jacobs approved development of a refined version.

When the shipment of new lab apes arrived, Jacobs inspected them and recognized Koba among them. He took the opportunity to sadistically taunt the bonobo, calling him the "ugliest ape in the world", and telling him that there would be no more "hand talking nonsense", and that no matter how human he thought he was, he was nothing but an animal. This prompted the long-suffering Koba to vow revenge on Jacobs, whom he saw as representing the worst of humanity.

When Koba was chosen by Will and Franklin to be the first test subject for the "ALZ-113" virus, Jacobs came to personally observe the experiment, claiming he wanted to watch Will's progress, but in actuality wanting to watch Koba get harmed. This proved to be a mistake, as the furious and vengeful Koba seized the opportunity to launch a surprise attack in an attempt to kill Jacobs. Although the scientists were able to subdue Koba, the bonobo's surprise attack accidentally exposed Franklin to the virus.

Later, when Jacobs saw Koba writing his name down, he immediately became convinced that the drug would also work on humans. As a result, Jacobs ordered further testing of the refined virus despite Will urging to study the virus more before continuing further tests. This proved that Jacobs only cared for the profits to be made at its success.

Soon after all the tests of the new drug, a hyper-intelligent ape named Caesar staged a rebellion against his captors and later rescued his fellow intelligent apes from the labs that were being experimented on under Jacobs' callousness. After Caesar freed all the apes from the laboratories, Jacobs flagged down a police helicopter where he commandeered it and the crew - directing them to eliminate the ape rebellion in an effort to avoid bad publicity for the company and himself.

Caesar and his apes then went on to battle a large police force stationed on the Golden Gate Bridge. During the battle on the bridge, Jacobs arrived on the police chopper and showed delight when the authorities began gunning down apes.

Eventually, Jacobs saw Caesar on the bridge and identified him as the leader. He attempted to have the chopper's gunner kill him with a hail of gunfire, until a silverback gorilla named Buck threw Caesar out of the way of the incoming gunfire and sacrificed his life by jumping on the police chopper and attacking its occupants - which causes it to crash on the very edge of the bridge, killing the entire crew and wounding Jacobs. After watching his friend Buck succumbed to his wounds sustained from gunshots and the crash, Caesar heard Jacobs pleading for help as the helicopter was about to tip over the edge. Caesar furiously walked over towards Jacobs, who pleaded with the ape to take his hand and lift him up to safety. However, in retribution for the death of Buck and the cruelty Jacobs has shown the apes, Caesar turned his back on him and instead allowed Koba to decide Jacob's fate. When Jacobs saw Koba, he promptly grew mortified and watched in terror as Koba walked up to the remains of the helicopter and ruthlessly kicked it over the edge - sending a terrified and screaming Jacobs plummeting to his death in the bay below.

Despite his death, Jacobs' actions shaped many events in the years to come as his experiments on and cruel mockery of Koba caused his hatred for mankind which drove him to overthrow Caesar years later. Koba's uprising ended with Caesar defeating and killing him in their final battle. Two years afterwards, the aftermath of Koba's coup and demise sparked the attention of a rogue military unit called Alpha-Omega - as their leader Colonel McCullough resolved to wipe out the ape colony. The result of McCullough's war with the apes resulted in not only his death, but ultimately concluded with Caesar's death as well. Lastly, Jacobs' greed and arrogance also indirectly played a part in the Simian Flu Pandemic that nearly drove humanity to extinction.

Jacobs was a narcissistic, ambitious, arrogant, greedy and selfish man. This is proven to the fact that he callously experimented on many apes in order to bypass human trials for his own profitable desires. All in all, he did nothing for anybody but himself, and ultimately considered everyone expendable. Jacobs was a cruel and sadistic bully, as he senselessly and gleefully experimented on and antagonized Koba, mocking him for being scarred and also dismissing his intelligence.

He also had no problems with others breaking the law, yet is willing to blackmail them with this information them - as seen when he threatened to fire Will if he did not do as he asked. In response to this, Will quit his job in frustration with the way Jacobs was treating him and his utterly greedy nature. But this didn't faze Jacobs entirely as he told Will that if he did leave, they would still continue with ALZ-113 trials - further showing that all Jacobs cared about was money.

Besides the fact that Jacobs was a corrupt individual who disregarded anyone he would offend in his quest for profit, he is soon revealed to be a pathetic and utter coward - as shown at the climax of the Battle on the Golden Gate Bridge when his helicopter was brought down by the then-deceased Buck. Thereupon Jacobs was the only survivor of the crash, but he cowardly begged for Caesar to help him even though he mistreated all the apes; Caesar coldly withdrew and signaled Koba to decide Jacob's fate. Consequently, Jacobs' cowardice flared up in his last moments just before he received his well-deserved comeuppance when Koba killed him by sending the helicopter with Jacobs inside it plummeting to the water - with Jacobs falling to his death in the process. 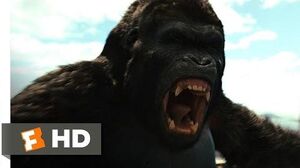