Co-editor of the Publishing House

Kill Will and get his job back in order to be the manager of the publishing house and be popular and successful like Will (both failed).

Stewart Swinton is the main antagonist of the 1994 thriller film Wolf. He works at a publishing house alongside the film's main protagonist, Will Randall, and tries to kill him to become successful.

He was portrayed by James Spader, who also played Mr. Richards in the 1987 film Mannequin, Lee Woods in 2 Days in the Valley, Rip in the 1987 film Less Than Zero, Mr. Black in the 2009 film Shorts, Robert California in the US version of The Office and the voice of Ultron in the 2015 film Avengers: Age of Ultron.

Stewart Swinton works with Will Randall at a publishing house. However, it is revealed that he begs their new boss to give Will's position to him. He had also been having an affair with Will's wife, Charlotte, behind his back. Will, who had been bitten by a werewolf earlier in the film, discovers this when he smells Stewart's clothes in his home. He arrives at Stewart's house and goes up the stairs to find Charlotte half-naked in his bedroom, but not before biting Stewart in the hand when he tried to stop him, thus turning him into a werewolf as well.

Will gets his revenge on Stewart by firing him and even urinates on his shoes when they confront each other in the restroom. Stewart begins to succumb to his inner beast during the full moon and kills Charlotte. Will is then deemed a suspect by both himself and the police-seeing as to how Will can't remember what he had done as a werewolf.

When Laura Alden, the daughter of Will's boss as well as his lover, goes over to the police station, Stewart shows up and meets her. She becomes suspicious of Stewart given his change in eye color as well as him exhibiting other werewolf traits. Stewart invites her to have a drink with him, and she agrees. However, right when he goes to talk to the detective, she leaves immediately. Stewart is talking with the detective with the intent of framing Will for Charlotte's murder. When he discovers that Laura left, he drives over to her house, kills two of her security guards by running one over with his car and ripping the other's throat-all the while transforming more into a wolf. He attacks Laura and tries to rape her to death, however, Will intervenes and the two werewolves engage in a fight. Will overpowers Stewart but decides to let him live. However, once he has his back turned, Stewart tries to kill him with garden pliers, but is shot to death by Laura.

In his first appearance, he seems like a charming and polite individual who idolizes Will. But it does not take long before he shows his true colors, that of a treacherous guy. He does not care about Will and is perfectly fine of having him fired to have his job for himself. Stewart is also a womanizer, seen with women most of the time and also flirting with Will's wife.

While already an unpleasant man before being bitten by Randall, his personality becomes far worse after the incident. He becomes a monstrous, ruthless and sadistic creature, showing pleasure in killing and trying to rape Laura in front of Will. Besides, it is confirmed by Dr. Alezais, an Indian mystic who specializes in lycanthropy, that Swinton' negative traits were already in him in the first place and the bite caused them to emerge from his subconscious. This proves that he is just a savage, vicious and irredeemable monster to the core. 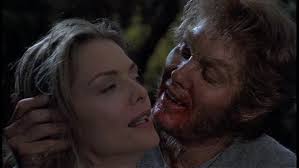 Stewart in his werewolf form with Laura. 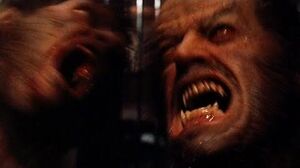