Scientist
President of the world (in a simulation)

Kill Lois Griffin and take over the world (formerly; abandoned).

Stewart Gilligan Griffin (born June 18, 1997), or simply Stewie Griffin, is the central antagonist of Family Guy, and the protagonist of Road to.... He is the infant child of Lois and Peter Griffin.

He is voiced by Seth MacFarlane, who also played Peter, Quagmire, Carter Pewterschmidt, and the Griffins' pet dog Brian.

Stewie originally had two goals in life: to murder his mom and taking over the world. However as the series progressed, Stewie became more of an anti-hero, prone to mocking others for his own amusement but he wasn’t as bad as the earlier seasons, especially the first three seasons. If anything, he became a mere jerk rather who sometimes reverts back to his old self.

In other episodes, Stewie engages in other violent or criminal acts, including robbery, carjacking, loan sharking, forgery, and killing off many minor characters. Stewie has been on getting rid of his mom since the beginning of the show, and has commented several times on the subject to other people, such as when he is being interviewed when the family become part of a reality show; "It's not really that I want to kill her... it's just that I want her not to be alive... any more." His matricidal tendencies are primarily as a result of her constantly (and unknowingly) getting in the way of his evil plans, so he desires to kill her so he can carry out his plans without interference. His attempts are always fruitless in the end, usually resulting from various unfortunate circumstances getting in the way, such as her opening a cupboard door as he attempts to blow a poison dart at her, or simply moving out of the way when he is about to shoot her with a crossbow. In the more recent seasons, Stewie has a larger amount of freedom from his parents, usually spending much of his time with Brian. This extends to the point of him being able to keep pigs from parallel universes ("Road to the Multiverse") or take part in the television series Jolly Farm ("Go Stewie Go"), as compared to the first season, in which his plans were constantly hindered by Lois. In "The Hand That Rocks the Wheelchair", Stewie inadvertently clones an evil twin of himself after trying to increase his evil nature. By the end of the episode, it is suggested that the original Stewie may have been unknowingly killed by Brian (as he cannot tell them apart) and Stewie turns to the camera with glowing yellow eyes (reminiscent of Michael Jackson's "Thriller"). But so far, the Stewie recently seen in "Trading Places", the follow-up episode, he still seems to have his mostly harmless eccentricity, shown when he asks Brian if he wants to trade places with him for fun. Stewie has had a few rare interactions with his apparent pedophile neighbor Herbert. It should be known that Stewie intensely dislikes him and even calls him a pervert. All this does, however, is move Herbert into thinking Stewie as "feisty".

In the double episode "Stewie Kills Lois"/"Lois Kills Stewie", Stewie appears to have finally killed Lois who a year after returns to Quahog, much to Stewie's dismay. At the Griffin home, Stewie takes his family hostage and, after killing Cleveland Brown, ties them up and forces Brian at gunpoint to drive him to CIA HQ. As Stewie gains world domination, a humiliated Lois shows up at Stewie's compound and after a bloody fight Stewie is killed, not by Lois but Peter. However, the events are reverted in a deus ex machina ending, where most of the story turns out to be a computer simulation. Because of the rather disastrous ending for himself in the simulation, he decides to put his plans of matricide and world domination aside for the time being.

The entire Griffin family has gone through quite a few changes as the series has progressed, going from immature jerks to emotionally unbalanced lunatics. Stewie, however, progressed backwards and has become less evil with each season. The most evil plan he successfully pulled off was to trap a group of toddlers in a secret pit because they had displeased him. He called it "The Club of Forgotten Children" and they all presumably starved to death. Stewie would normally unflinchingly commit acts like murder, theft, hijacking, bombing and extortion among many, many others and embraced this depraved personality disorder of his. He never managed to kill a member of his family even though he tried to do so in almost every episode. Furthermore, he did help them whenever it suited him.

Since the fourth season, Stewie has become far less evil and more or less like the rest of the family had been in the first few seasons. Even so, Stewie has retained some of his malicious traits but directs them to other members of the world instead of his family who he has visibly grown to care for. Stewie was originally a very unsocial kid who could not even have normal conversations with his family. He instead spent his time building a huge array of weapons and gadgets which seemed capable of almost anything. His British accent and loathing for just about everything with a heartbeat were very noticeable in earlier seasons. Stewie also had an absurdly wide vocabulary in earlier seasons and used huge words for situations that did not require them.

In the present seasons, Stewie is far more laid back and flamboyant, even enjoying his family's company. One running gag with Stewie that has become popular is his sexual orientation. He has had crushes on several girls (i.e. Janet, Penelope), but has also been very public with his struggling homosexuality. He also seems to not completely understand sex. At first, he did not even like the topic; he recently appears to understand it more, but is still ignorant to some its more specific details. However, he still has moments that show he hasn't reformed as he still acts mean to those he dislikes.

He also once tried to befriend Bart Simpson in the Simpsons Guy crossover. However as both of them have completely different bad boy personalities due to the difference in comedic style between both series (Bart pulls pranks and vandalism, though he has a few redeeming qualities and is not all bad, in contrast to Stewie who is more of a sociopath as he has a violent and disturbing personality), Bart became creeped out by Stewie especially after learning that Stewie kidnapped all of his enemies (Nelson Muntz, Jimbo Jones, Principal Skinner, Sideshow Bob and Apu, just to say the pun "I took a-poo.") and chose not to befriend him, devastating Stewie. 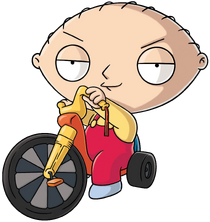 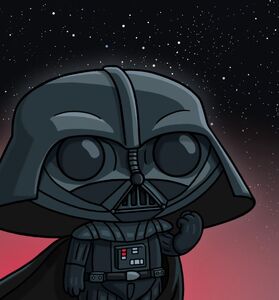 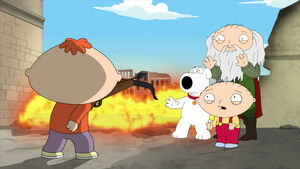 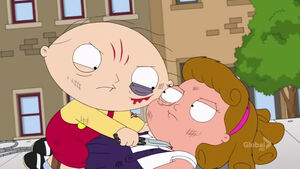 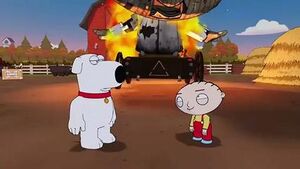 Stewie in "Family Guy: Back to the Multiverse 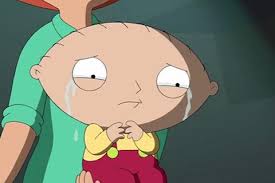 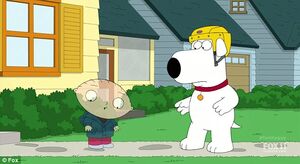 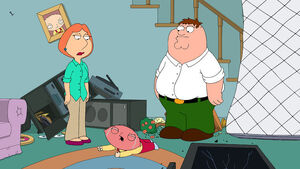 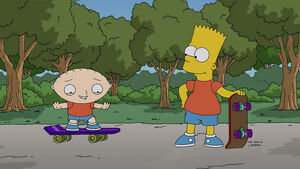 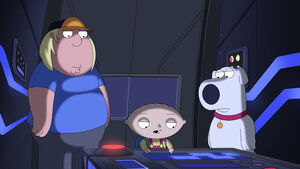 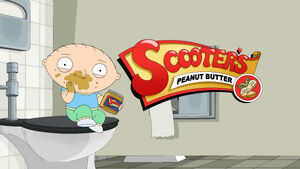 Stewie in "The Peanut Butter Kid"

Stewie gets a sunburn

Stewie is happy that he's going to Disney World 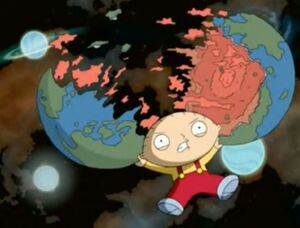 The tyrannical nature of Stewie.
Add a photo to this gallery 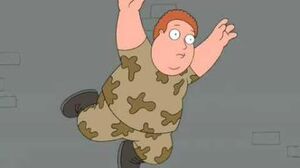 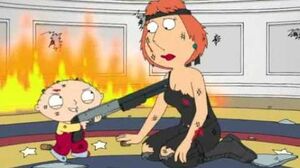 Retrieved from "https://villains.fandom.com/wiki/Stewie_Griffin?oldid=3651854"
Community content is available under CC-BY-SA unless otherwise noted.