Sticky Fingaz is a real-life actor and rapper fictionalized for the videogame Def Jam series as a playable character and recurring antagonist. He was also a fighter and member of D-Mob's crew before finally betrayed him to join Crow.

He was portrayed by himself.

In the second game, is seen being taken away by the police as they are closing down the Def Jam tournament. While Jervis and Starks are driving to the police station, they hit by another car. Hero comes out of the car and helps D-Mob. They headed to the safe house where they see Blaze and Sticky playing video games while Redman is sleeping on the couch. They are surprised to see D-Mob and planned to putting out their remaining members of the crew on the streets after the events from the first game. D-Mob tests Hero's fighting skills by having him fight House. After defeating House, Blaze is impressed by Hero's fighting skills, but Sticky is still skeptical about him and his chances in a real fight, D-Mob helps Hero set up his own flat and give him some money "look the part."

Later, after the player defeats WC at the Red Room, D-Mob and Blaze thanked Hero for his services and winning matches and clubs. Crow approaches them about a business proposition and states how there are not enough places for both of them to rule. Crow challenges D-Mob to a winner-take-all; the winner gets all the clubs, while the loser "goes to Jersey." Crow has one of his best fighters Crack to against D-Mob's best man, Hero. Sticky becomes outraged about this and furiously leaves the club, D-Mob tells Hero not to worry about him and focus for the upcoming fight.

Crow hosts the big fight at the Club Murder, Crack's stage. Hero, D-Mob and Blaze arrives at Crow's building and enter the arena. Hero wins the fight and celebrates it in a limo. D-Mob rewards Hero with a "Vendetta" chain and stating he is now part of the "family." As the limo is pull up, they are attacked by Crow's henchmen and ends in a large accident near the 125th Street Station, resulting in D-Mob severely injured and trapped within the limo. As the player tries to pursue the attackers, it is revealed that Sticky joined Crow' crew, Trejo stays behind and attempts to shot the player, but runs out of bullets ends up fighting hero. Hero throws Trejo on to a moving train, killing him in the process.

After numerous attempts trying to get Hero to join his crew to win his clubs back, Crow ordered Sticky and Magic to kidnap the player's girlfriend. At the player's hideout, Sticky ambushes and hits Hero with a baseball bat. Crow walks in and tells the player if he had a chance to reconsider his offer. Hero demands them leave, but Crow reveals a piece of his girlfriend's hair, giving the player no choice but to fight for Crow, before leaving, Sticky kicks the player's stomach and claims "he ain't so tough!"

After rejoining D-Mob's crew and defeating both Magic and Crack, the player grabs Magic and demanded him to tell him where he held his girlfriend at, Magic tells the player that they kept her at the Red Hook Tire Co. warehouse. The player arrives and confronts Sticky, who was igniting the building with a lighter, creating a ring around themselves. At this point, Sticky wanted to finish Hero off once and for all in an inferno match. However, Sticky is defeated and killed in the flaming warehouse, burning his body in the process and ending his gambit for good. 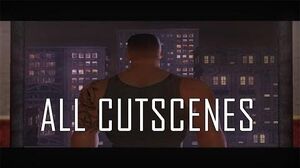 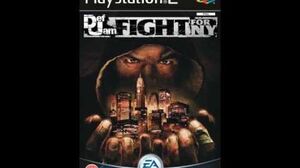 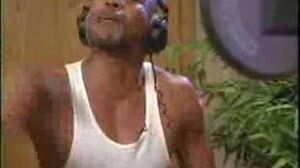 Def jam fight for new-york Sticky Fingaz
Add a photo to this gallery
Retrieved from "https://villains.fandom.com/wiki/Sticky_Fingaz_(Def_Jam_Fight_For_NY)?oldid=3646375"
Community content is available under CC-BY-SA unless otherwise noted.