Destroy the KND (both failed).

Stickybeard, formerly known as Stickyfuzz, is a recurring antagonist in the Cartoon Network series Codename: Kids Next Door. He was once a cabin boy of Licorice pirates.

He was voiced by Mark Hamill, who is also known for the live action role of Luke Skywalker in the Star Wars franchise and also the voice actor for the Joker.

Stickybeard is a candy-loving pirate who sails around the suburbs where the members of Sector V live in his ship the Sweet Revenge (which is a reference to the Queen Anne's Revenge). Along with his crew of Candy Pirates, Stickybeard hoards candy in the same manner that traditional pirates horde gold, primarily by stealing it from various children. Stickybeard's name references the notorious real-life pirate Blackbeard, as well as the fact that his beard has several pieces of candy stuck to it. The candy of Stickybeard and his crew is very prominent to the point that parts of the ship itself is made of candy, and they use weapons made of candy, such as candy cane swords and gumball cannons.

Stickybeard frequently targets the Kids Next Door due to their large stash of candy, and is most closely associated with Numbuh 5, also a lover of candy, who he respects as a rival; he even offered her the position of First Mate and heir aboard his ship in Operation P.I.R.A.T.E., which she turned down. He has aided members of the KND on multiple occasions, including saving them from the great white asparagus monster and escorting them home in Operation A.F.L.O.A.T. and teaming up with Numbuh 5 in Operation L.I.C.O.R.I.C.E. to save Heinrich Von Marzipan (his former cabin boy) from evil pirates made out of licorice under the command of Black John Licorice, who Stickybeard was worked for as a cabin boy on their ship in his youth. He was also on Numbuh 4's bowling team in Operation M.I.S.S.I.O.N.. He especially eats candy in a rush, as seen in Operation Q.U.I.E.T..

In real-life, Stickybeard would likely be arrested for breaking and entering, robbery, property destruction, and possibly involuntary manslaughter if anyone was in the houses destroyed by his ship.

Like every villainous adults, Stickybeard is mean, cunning, treacherous and loathsome, so he hates the Kids Next Door. He favors Sector V as his target, especially Numbuh 5. He views the Kids Next Door as competition for candy as if it were scarce even though he already possesses a ship filled with mountains of candy. Stickybeard can also be kind and sympathetic to some kids he seems to trust.

He views Numbuh 5 as a rival, but respects her as "a fellow sweet tooth" and when they first met, he kidnapped her and tried to convince her to betray the KND and join his crew as his new first mate. Type of Villian: Delusional Pirate. 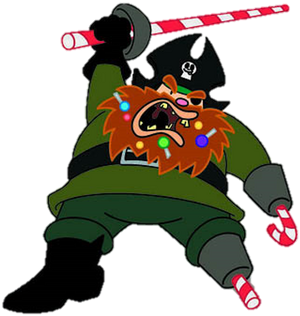 Retrieved from "https://villains.fandom.com/wiki/Stickybeard?oldid=3556214"
Community content is available under CC-BY-SA unless otherwise noted.