Spirit Sharp-Shooter of the Haunted Forest

Sting Chameleon is one of the eight Mavericks in the original Megaman X. He is sly and only respects those who are strong, which was possibly his reason for joining Sigma. Another reason that he turned Maverick may have been due to the involvement of hostages.

He was voiced by Roger Rhodes, who also voiced Vile in the very same game, and Fire Man in Mega Man: Powered Up.

Sting Chameleon can blend into his surroundings to near invisibility. While invisible, he will either move close to the player to try and his him with his tongue or fire his Chameleon sting by swinging his tail. In the remake, he can fire a faster version of his Chameleon Sting after a short charge. His deadliest attack is hanging from the ceiling by his tongue and cause spikes to rain on the player. 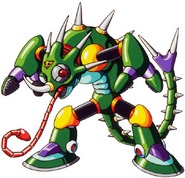