Stirba is the main antagonist of the 1985 horror movie Howling 2: Your Sister Is A Werewolf.

She was played by Sybil Danning when young and Valérie Kaplanová when old.

Ben White attends the funeral of his sister, journalist Karen White, the heroine of the previous film. Ben meets both Jenny Templeton, one of Karen's colleagues, and Stefan Crosscoe, a mysterious interloper who tells him Karen was a werewolf. Providing videotaped evidence of the transformation and turning up to destroy Karen as her undead body rises from the grave, Crosscoe convinces Ben and Jenny to accompany him to Transylvania to battle Stirba, an immortal werewolf queen. Ben dons a Canadian tuxedo to prepare for the battle. Along the way, the trio encounter Mariana, another lusty werewolf siren, and her minion Erle.

Arriving in the Balkans, Ben and company wander through an ethnic folk festival, unaware that Stirba is off in her nearby castle already plotting their downfall. Eventually, the adventurers do battle with Stirba in an assault that involves disguised dwarves, mutilated priests, supernatural parasites, and surprise revelations.During the assault, Stefan confronts Stirba, who casts this hypnotizing, suicidal spell over him. Stefan eventually sees through this and kills Stirba at the cost of his own life. 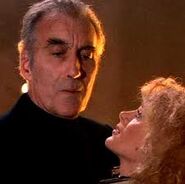 Stefan's encounter with Stirba.
Add a photo to this gallery

Retrieved from "https://villains.fandom.com/wiki/Stirba?oldid=3904364"
Community content is available under CC-BY-SA unless otherwise noted.