Owners of the Antique Qulit Shop

Leaders of the Quilt Club

Knitting and quilting.
Running the Quilt Club.
Collecting the souls to prolong their lives forever.

Manipulate women to take their souls and prolong their lives indefinitely (mostly succeeded from the past, but later failed in stealing Muriel's soul).

The Stitch Sisters (whose names are Elisa and Eliza Stitch) are two villainesses appearing in the animated series Courage the Cowardly Dog, being the main antagonists in the episode "The Quilt Club".

They are two Siamese sisters, who run a shop with old quilts and are the leaders of the Quilt Club, which in reality is a cover for deceiving women who want to be members to sew them into the quilt and imprison their souls forever. They often speak unanimously.

They were voiced by Fran Brill.

The sisters are Siamese twins, which means that their bodies have been joined together since birth, ; and in their case. It is one body and two heads, with the right head being named Elisa and the left head Eliza. Over the millennia, they have retained the same appearance which is, two older women of unknown age, thin figure, skinny faces, purple eye shadow, long, pointed noses, crooked teeth and black hair arranged in coca. They wear according to current age trends and currently wear a long black dress with gray collars and blue necklaces with a blue jewel under the collars.

The Stitch Sisters are excellent cheaters and liars. From the outside, they look like ordinary old ladies who sell their hand-sewn quilts and are very customer-friendly. However, their true nature is much darker. Elisa and Eliza are mean, insidious and diabolical. When they manage to find a potential member of their "Quilt Club", they slowly begin to show their true nature. They have mastered the ability to break strong will and lure the victims to them. The sisters have very strict requirements for their new members. Access to their club can only be a woman who, in an act of desperation and desire to join, will forget about her family, friends and previous life and is an expert in sewing and knitting. However, ultimately, it is the magic quilt itself that decides whether a woman is the right candidate or not, and the qualities listed above are a requirement for a magical process in which the quilt absorbs the soul of the victim, trapping her forever. In the end, Elisa and Eliza only care about extending their lives indefinitely by manipulating women and imprisoning their souls inside the magical quilt.

The Stitch Sisters lived in prehistoric times. At some point in their lives, they came into possession of a magical, half-living quilt possessing the powerful power of imprisoning the souls of others. Thanks to the power of the quilt, Elisa and Eliza managed to extend their lives for countless ages by trapping the souls of innocent women inside the quilt. They did it under the guise of the "Quilt Club". They traveled to many countries such as Egypt, China, Japan, Constantinople and early American colonies and lived through many eras where many women fell into their hands. After many centuries of collecting and sewing in countless souls, the Sisters seam settled in an old house in the town of Nowhere in the United States, where they lived and opened their quilt store.

Muriel Bagge and her dog Courage browse through and look for the perfect materials in an old and dusty quilt store that specializes in sewing quilts. The owners of the store are a bit strange Siamese twins named Elisa and Eliza Stitch, who live and work in their quilet store. Muriel expresses their delight at their quilts and asks the owners if she could join their Quilt Club, as the inscription is at the checkout. Muriel herself admits that she loves to quilt and sew, but sewing in loneliness doesn't give her so much pleasure, so she would like to do it with others who share her passion, and then shows them her samples. However, the sisters are not pleased with her samples, telling her that they prefer to sew "new memories".

Muriel works her fingers to the bones to sew a perfect sample of the quilt, which makes her slowly forget about Eustace and Courage. Despite her best efforts, the sisters constantly refuse her membership saying that she must try harder. Muriel finally sews a football field, but she is exhausted. The sisters ask her what if she wants to belong to the club more than she belongs with Eustace, but Muriel completely forgets about him. And at this point, Elisa and Eliza know that Muriel is ready for membership, because that was their goal from the very beginning, to make Muriel forget about Eustace and Courage just to join their Quilt Club.

On the day of the initiation ceremony, the Stitch Sisters arrive at the Bagge's farm with their magic quilt. Muriel is surprised that there are no other members, but the sisters reply that the only thing she has to do to be accepted is to quilt a certain symbol that they drew on the wall, into a piece of fabric and then sew it on a quilt. Courage takes a photo of the symbol and scans it on his computer. The computer displays him the story of two sisters and terrified learns that Elisa and Eliza lived for hundreds or even thousands of years by persuading unsuspecting women to sew on their quilt the Symbol of Everlasting Life (i.e. the same symbol that Muriel is quilting on a piece of fabric), which meant that their soul was forever trapped inside the quilt, while prolonging the life of the sisters. Downstairs, Muriel has finished quilting and is happy to meet other members. Then the sisters help her sew her a piece to the quilt. At this point, Muriel learns that the whole Quilt Club is that magic quilt. Courage runs down to warn Muriel, but it's too late. The terrified dog sees his owner is being sewn by the sisters into the quilt. Elisa and Eliza tell Courage that Muriel doesn't want him anymore and nothing will remind her of her previous life while she is inside the quilt. After saying the spell, Muriel's soul gets inside the quilt where she is greeted by the souls of other women. These women are from different periods in history and have been imprisoned in exactly the same way as Muriel.

Courage hurries to rescue Muriel. He manages to surprise the sisters and tie them with a yarn. He tries to sew to the quilt a piece of cloth with baby Eustace and Muriel starts to remember her family. When he sees that it works, Courage sews his own fur to the quilt, which causes Muriel to remember him, and it frees her and other members out of the quilt. The whole quilt falls apart and transforms the Stitch Sisters into a piece of fabric with their embroidery, sealing them for eternity and bringing their threat to an end once and for all. 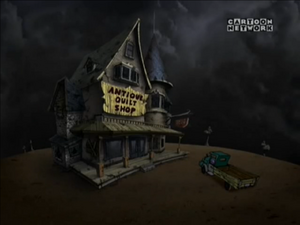 The house and the shop belonging to the Stitch Sisters. 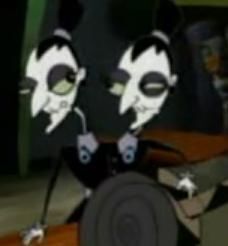 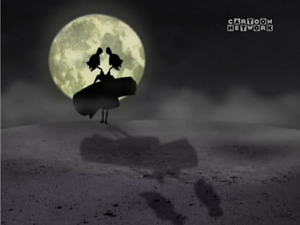 The Stitch Sisters visible in the moonlight. 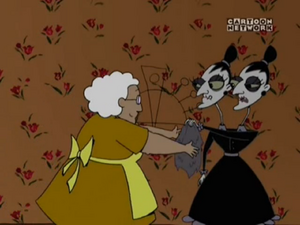 The Stitch Sisters telling Muriel what to do. 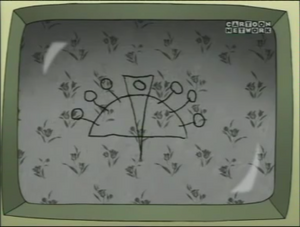 The Quilt's Symbol of Everlasting Life. 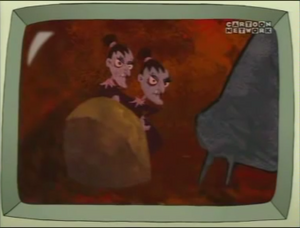 The Stitch Sisters in prehistoric times. 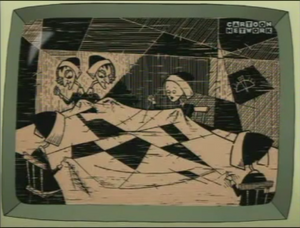 The Stitch Sisters with the Salem quilt club. 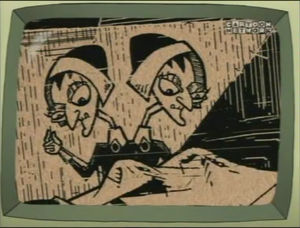 The Stitch Sisters as pilgrims. 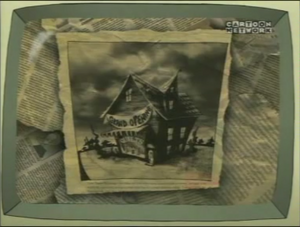 The old house in the town of Nowhere. 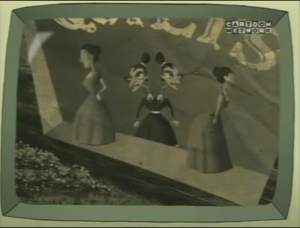 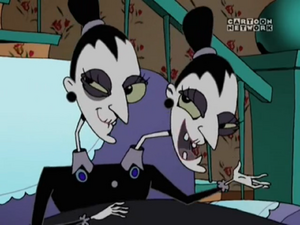 The Stitch Sisters telling Muriel that she is ready. 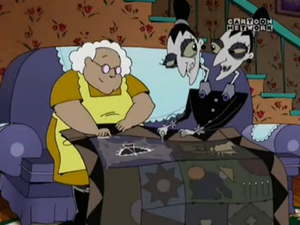 The Stitch Sisters and Muriel sewing the symbol to the quilt. 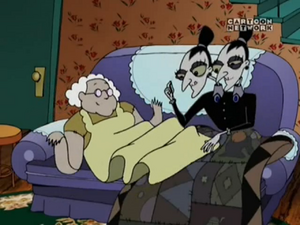 The Stitch Sisters sewing Muriel's soul into the Quilt. 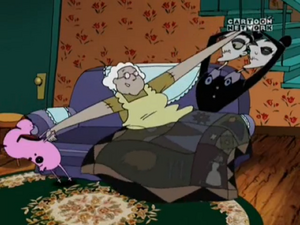 Courage trying to save Muriel from the Stitch Sisters. 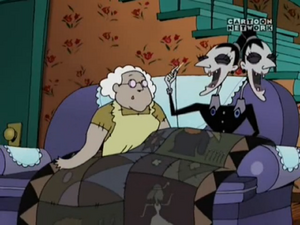 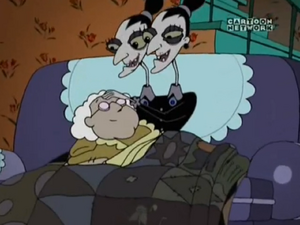 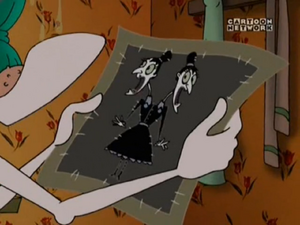 The Stitch Sisters as a piece of fabric. 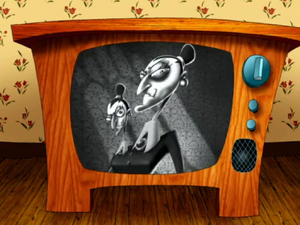 The Stitch Sisters seen on the TV screen at the beginning of the show.
Add a photo to this gallery

Retrieved from "https://villains.fandom.com/wiki/Stitch_Sisters?oldid=4270560"
Community content is available under CC-BY-SA unless otherwise noted.