Leader of the Stockingcons (formerly)

Kill all Ghosts and get back to Heaven.

Stocking Anarchy, or simply known as Stocking, is a gluttonous "gothic lolita" angel and was one of the main titular protagonists of Panty and Stocking with Garterbelt, until literally the very end of the last episode.

She was voiced by Mariya Ise in the Japanese version, and by Monica Rial in the English dubbed version.

Stocking is one of the Anarchy Sisters, a pair of angels who were banished from Heaven for their rude behavior and sentenced to hunt Ghosts to redeem themselves. In episode 7, she became Gothitron Stocking and founded the Stockingcons after she ate Mingeatron's heart. In episode 12, she succeeds at doing just that and is taken back into Heaven, while Panty is left on Earth, having failed her test. However, Stocking returns later in episode 13 to help Panty fight Corset. Together with her sister and with some help from Chuck, Garterbelt and their mother, they foil the demon's plan for global domination.

However, in the very last minute of the last episode so far, she reveals herself to be a demon and murders Panty, cutting her up into 666 pieces. She then leaves with Corset, who is resurrected as a blob from Brief's penis despite having been seemingly killed earlier. The two proceed to head to a neighboring city, leaving a trail of Panty's pieces and saying to Brief that if he wants to get her back, he has no choice but to follow them and lend them his assistance with opening a new Hell's Gate.

There is absolutely nothing whatsoever in the series even remotely foreshadowing the strange twist (even though she lead the Stockingcons in a war against Panty), which makes no sense even by this obscene show's standards. The creator studio, Gainax, is infamous for bizarre twist endings that infuriate fans, and this ending is by far the most extreme example of this ever, to the point that it qualifies as a parody of this tendency and was probably an outright act of trolling.

Despite the ending card explicitly stating that the story will be continued in a second season, this alleged second season has not been announced and likely does not exist. This is allegedly because the creators of Panty and Stocking with Garterbelt left Gainax and formed Trigger, but Gainax still owns the rights to the show, leaving them unable to make a sequel. However, some fans speculate the promise of a sequel was false all along.

The ending is indeed canon since the release of Geek Boy Homecoming in 2017.

Since no explanation so far exists for the twist, many fans have taken to making up their own theories. A popular interpretation is that Stocking is at that moment brainwashed by Corset. Another is that this Stocking is an imposter replacing the real one, possibly a demon in disguise. However, others theorize that she has really become evil, and her return in episode 13 was actually her getting banished from Heaven once again, perhaps permanently (becoming a fallen angel, and hence a demon).

Another interpretation is that this ending of the show is non-canon and merely serves as an ending gag that parodies Gainax' infamous twist endings.

Stocking is a major character in the well-known Youtube series "The Frollo Show". There, she falls in love with Frollo at first sight (similarly to her infatuation with the disgusting Ghost in the episode Ghost: The Phantom of Daten City). However, Frollo does not reciprocate her feelings and openly admits to her that he is in love with her sister Panty (who in turn does not reciprocate his). Stocking's reaction to this is to rape him.

The two go on to having a complicated relationship, with Stocking occasionally helping Frollo defeat his enemies in perpetual attempts to make him reciprocate her affections, but also occasionally making his life worse when he does not reciprocate them (as seen in Frollo Beats Up Evil Residents where she wishes for Frollo to "get fucked", which turns a defeated Jafar into a powerful genie).

Things come to a head when Stocking finally joins Los Nos Frollos, an association consisting of all of Frollo's enemies, and immediately assumes leadership of it and devises a plan to humiliate and possibly destroy Frollo. However, she later states that although she really does want revenge against Frollo, she mostly joined Los Nos Frollos to prevent the group from causing too many casualties (she was the one who developed the PITy, a cauldron where Los Nos Frollos members could dump Frollo's incapacitated allies without killing them). She also reveals that she does not really want to kill Frollo, just to humiliate him.

As of currently, the two are temporary allies against the massive threat of the godlike Wilford Brimley.

Stocking has very long purple and pink hair, teal eyes and rather large breasts. She usually wears a black and white Gothic Lolita dress with a bow in her hair and a pair of distinctive striped stockings, though occasionally she has been seen in other outfits, including a school uniform, long formal dresses, a business suit, and a bathing suit.

She often carries around a plushie in the shape of a half-skeleton cat. This plushie is called Honekoneko (Bone Kitten) or sometimes "Hollow Kitty", and its expression often changes to mirror Stocking's own.

Stocking is more focused on her task and serious than her sister Panty, though that is not saying very much. She has a very serious sweet tooth and constantly gorges herself on sugary treats. Despite this, she asserts that she can never gain weight because all the fat goes straight to her breasts.

Unlike her sister, Stocking is not particularly lustful and has sex much more rarely (again, given Panty's tendencies that is not saying very much). She is a goth girl (as evidenced by her attire and her room) who displays some strange sexual fetishes, namely fondness for BDSM (as shown when she finds enjoyment in getting tied up and electrocution). She also once fell in love with an absolutely repulsive-looking and obnoxious Ghost. Those strange sexual preferences may be foreshadowings of her evil nature, especially when one ponders how much she has in common with the main villain of the show, Corset.

Stocking has the ability to turn stockings (her own or presumably anyone else's) into holy Angelic katanas called Stripes I and II which can damage and destroy Ghosts, Demons and other Angels. Usually, she fights with only one sword, but when pressed can remove both her stockings to duel-wield. She displays impossible ability with her blades, as she is able to create myriads of slicing waves, spin around with her swords extended to slice everything around her, and deflect bullets from demonic revolvers. Garterbelt has stated that where Panty primarily relies on power, Stocking primarily makes use of skill. She also has diverse other attributes associated with an angelic nature, such as enhanced strength and endurance.

She also has the noncombat ability to never get fat, claiming that all of the sweets that she eats only enlarge her breasts. This ability was once overdriven by a Ghost who produced unnaturally fattening treats, but aside from that, there seems to be no reason to disbelieve her claims.

Stocking also seems to have extreme luck at gambling, shared with her sister Panty. It is unclear whether this is a common Angelic attribute or unique to the two of them. However, this incredible luck can be broken by the presence of a demon.

Her plushie Honekoneko also has an ability of its own: breathing fire at opponents. However, this was seen only once, in If Angels Wore Swimsuits. 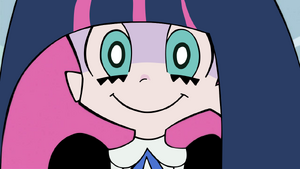 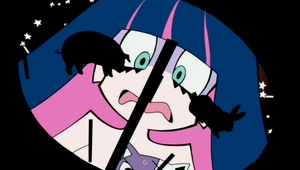 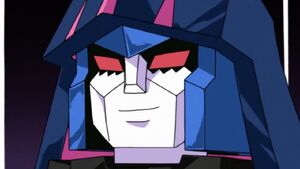 As Gothitron Stocking
Add a photo to this gallery

Retrieved from "https://villains.fandom.com/wiki/Stocking?oldid=4104451"
Community content is available under CC-BY-SA unless otherwise noted.